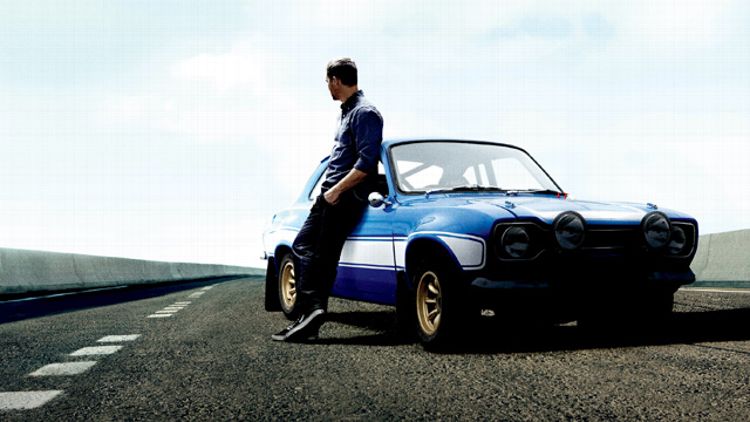 Vin Diesel, the costar most closely identified with Walker, has paid tribute both online and in person. On his highly active Facebook page, Diesel writes a note to Walker, addressing him both by a nickname and by the name of his Fast & Furious character:

“To live in the hearts we leave behind, is not to die.”

Pablo, I wish you could see the world right now… and the profound impact, your full life has had on it, on Us… on me…

I will always love you Brian, as the brother you were… on and off screen.

Diesel also appeared at the Santa Clarita crash site, which has become a makeshift memorial, and used the PA system on a cop car to say “If my brother were here today … And if he saw all the love you were bringing here … If he could see for himself that [you have] shown my brother love …” According to the L.A. Times, fellow costar Tyrese Gibson was also at the site, and “broke down … after leaving a single flower.”

Dwayne “The Rock” Johnson has also spoken out, in a Q&A with EW, and praised Walker’s work ethic: “Paul came prepared. He spent a lot of time on the road with police officers and a lot of time handling weapons to make sure he was incredibly proficient. When you see Paul onscreen, you 100% push all your chips in to the authenticity with which he plays his roles.” On a personal note, the Rock says, “We would talk about silly guy things, his fast cars and my pickup trucks, or we would talk about the beautiful energy of Hawai’i — but it always ultimately came back to family. And very specifically the beautiful and important bond between a father and his daughter.”

A tribute has also appeared from a less likely source: the RZA. Via his SoundCloud page:

This song, entitled “Destiny Bends” was written last night after hearing the tragic news of the loss of a good man named Paul Walker. I met Paul on the set of the film Brick Mansion, where we talked, laughed, and exchanged ideas of life and fatherhood. I only knew him personally for less than a year, but we knew each other through our work and art. We saw in each other a kindred spirit of men coming from unlikely circumstances, and rising to be the light and beacon of our family and loved ones. Men who learned the joy and pains of love in life, and success, while coming to realize that nothing is more important than family, friendship, and the brotherhood of humanity. Millions of people get to know an artist or movie star through their work, but few are allowed to cross each others’ paths and see through the veil of stardom and find the common denominator that we share. As all physical things will decay and wither away, film, art, and music remain longer than the vessel that delivered them. In this vein, the one thing we can’t take away or give back is time. So, thus, time is the most precious gift. I dedicated my time to compose this song with my two sons and new friend Will Wells, who was kind enough to sing and perform it for me. We dedicate it to Paul Walker. A good man. We had plans to continue working with each other in the future. It seemed destined, but “destiny bends”.

*Note* This song is not for criticism, it’s just a sketch demo. Please enjoy and reflect.

Your comrade in the struggle,
RZA

Meanwhile, reports of drag racing have been ruled out. Says CNN: “Earlier, Los Angeles County Sheriff’s Sgt. Richard Cohen … received a tip Sunday suggesting that another car was at the scene racing the Porsche when it slammed into a light pole and burst into flames. But investigators have since ruled out the presence of a second vehicle and the theory that the Porsche was drag racing, a spokesman said Monday afternoon. Speed was a factor in the crash, the Los Angeles County Sheriff’s Office said. A 45 mph speed limit sign was attached to the light pole knocked down by the Porsche.”

And Fast 7 will be delayed, but not scrapped altogether, says THR: “Walker, along with the rest of the cast and crew, had been scheduled to return to Atlanta on Sunday to resume shooting … Those plans are on hold … Director James Wan and Universal executives held a conference call Sunday morning to discuss the state of the film, whether rewrites would be necessary and how to proceed in a manner that would be respectful to Walker’s death.” The movie is slated to see release July 11, an “expedited schedule” that led in part to Justin Lin, the director of Fasts 3-6, to bow out. Also: “Insiders say a large part of the film had been shot, although in January, Walker and the rest of the Fast 7 team were scheduled to travel to Abu Dhabi to film additional scenes.” A spokesperson adds: “All of us at Universal are heartbroken. Paul was truly one of the most beloved and respected members of our studio family for 14 years, and this loss is devastating to us, to everyone involved with the Fast and Furious films, and to countless fans. We send our deepest and most sincere condolences to Paul’s family.”

The DJ Earworm 2013 Mashup Has Arrived, Led by Miley and Lorde