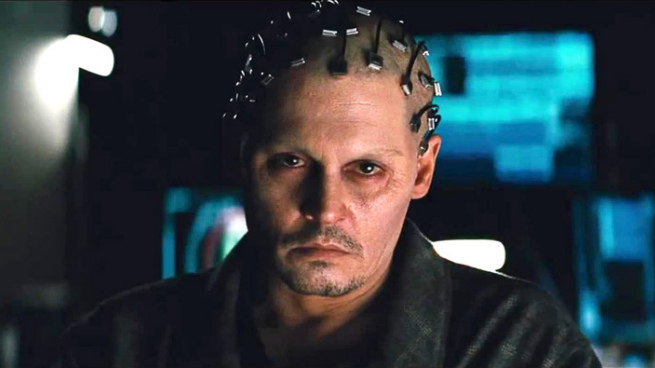 Wally Pfister is best known to cineasts as the acclaimed cinematographer who won an Oscar for his work on Inception. Now he’s made his directorial debut with Transcendence, which shares Inception’s sci-fi milieu, but … that’s about it.

Johnny Depp plays Dr. Will Caster, a scientist trying to develop a sentient computer. Unfortunately, this is the sort of project that attracts the attention of modern Luddites. Will gets shot with an irradiated bullet, and in the few weeks before his inevitable death, his wife, Evelyn (Rebecca Hall), gets the idea of uploading his consciousness to the computer so that his ideas can live on after his body has expired. What could go wrong?! (Things go wrong.)

There was a time when Johnny Depp made movies that humans actually wanted to see; this is not one of them, judging by its 19 percent Fresh rating on Rotten Tomatoes and its having barely earned back its budget. But I guess now Tim Burton can say he’s not entirely to blame for the current state of Depp’s career.

Wesley Morris: “Transcendence doesn’t induce paranoia, wonder, or suspense. It’s the most incurious film you could make about something as simultaneously preposterous and promising as Johnny Depp the Internet.”

Given how many award nominations biopics tend to attract, spring is not the usual time for them to hit theaters. But then again, much of Cesar Chavez’s work took place in and around hot farms and fields, so it might be weird to watch it in December.

Michael Peña plays the titular Chavez, the founder of United Farm Workers; the film follows the growth of the organization and several nonviolent protest actions that Chavez led. Joining Peña in the cast are America Ferrera, Rosario Dawson, Wes Bentley, and John Malkovich.

Wesley Morris: “The movie isn’t exactly subtle (‘I want to get my hands dirty’ is a line typical of this Chavez), but it’s attuned to the stakes of the farmers’ plight and doesn’t need an interloper to shout on their behalf.”

Having written Training Day, Dark Blue, S.W.A.T., and End of Watch, among others, David Ayer has pretty much made himself synonymous with “law enforcement action dramas.” And here’s the latest!

Arnold Schwarzenegger is the head of an elite DEA squad (not sure whether the film supplies an explanation for that accent). They all get the great idea to steal a bunch of cash from a cartel bust, but things go awry when it goes missing from their hiding place.

Wesley Morris: “Sabotage is almost as nauseating as Tony Scott’s Man on Fire, in which Denzel Washington licensed himself to go Training Day all over the Amazon. But Ayer doesn’t share Scott’s obsession with using testosterone the way Jackson Pollock used paint. And even Scott never worked with a script this leaky and distractible.”

In Tyler Perry’s The Single Moms Club, a group of (you guessed it) single mothers bond over their shared lot in life, and pull together to support one another in their common efforts to find love again. The cast includes Nia Long, Terry Crews, Eddie Cibrian, Amy Smart, and Wendi McLendon-Covey.

Heaven Is for Real

In 2010, a pastor named Todd Burpo published a book about his 4-year-old son Colton’s reports of having died during emergency surgery and visited heaven. And though the book received criticism for the lack of evidence for its factual elements (did Colton die during surgery?) and from Christians for its embroidery of the actual Bible … yes, of course it was adapted into a movie.

Greg Kinnear stars as Todd, the pastor whose world is rocked when his young son starts telling him stories about meeting relatives in heaven that he’d never even heard about. Alas, the technology does not exist for Colton to have been played by Jonathan Lipnicki circa Jerry Maguire.

Wesley Morris: “From the first note, the movie was impressive, letting Kinnear be a husband and father first and preacher second. But there was a moment when he turned into a bad husband and essentially pimped out his 4-year-old son to find godly answers. And I wasn’t sure if this was frowned upon hard enough in the film.”

Do You Like (Fake) Drugs? ‘Lucy,’ NZT-48, and a Definitive Ranking of the 10 Best Movie Narcotics

Songs of the Week: Got Those '94 Weezer Blues All Over Again