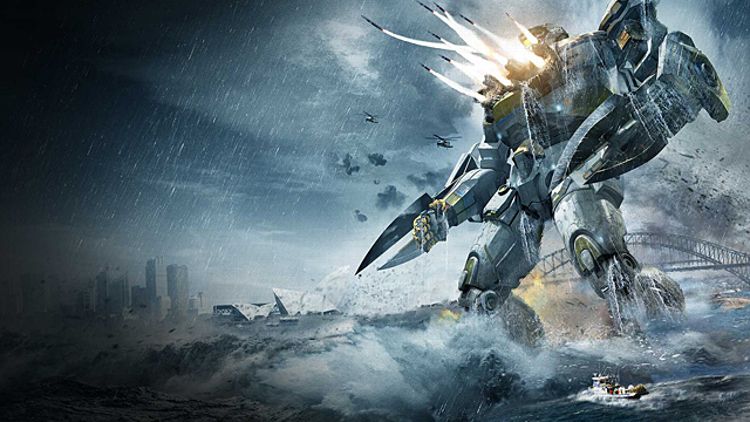 It’s the relatively near future. The Earth is in turmoil. What’s ruining everyone’s good time — the catastrophic effects of climate change? Economic collapse? Oh my, no: It’s all the giant lizards that keep swimming out of an interdimensional fault in the floor of the Pacific Ocean. But the humans aren’t beaten yet: As we all know, the only way to fight giant lizards is with giant robots!

I don’t want to oversell it, so I’ll just say Pacific Rim is all the things anyone could want from a summer action movie. The giant lizards — called kaiju — are truly enormous, and both the look of their scales and the devastation they wreak is rendered with the appropriate care. The human characters may not be drawn as carefully, but it’s hard to care; they each have a reason to be committed to the kaiju cause (loved ones killed by kaiju, generally) and one other characteristic. Frankly, that’s as much as you care to see before the action moves back to robots fighting lizards — something, fortunately, you never have to wait too long for.

While director Guillermo del Toro is better known for creepy fantasy fare like Pan’s Labyrinth and the Hellboy franchise, Pacific Rim proves that he is adept in the construction of a fun, slick popcorn movie, too, and I hope he gets to make 50 more.

Wesley Morris: “Del Toro is a dreamer. He’s a visionary. If you give him a pile of money to make enormous robots fight enormous monsters at the end of civilization, he will work to make Pacific Rim a movie that makes you feel all the enormousness. He will put you at the feet of the monsters and inside the bellies of the beasts. He will do what a movie about big reptiles and big machines is supposed to do: make you look up, make you feel as if the screen is grossly inadequate to contain what’s on it, even though, if you’re charmed — or strategic — you’re already watching the movie on the biggest screen you possibly can.”

There are two kinds of people in the world: those who see comedians only when they play the biggest venues imaginable, and those who actually like stand-up comedy. So the fact that this Kevin Hart concert film was recorded during a show at Madison Square Garden is automatically going to put potential audience members on either side of a wide chasm.

That said, Hart is one of the richest, most successful stand-up comedians currently working, so clearly he knows a few things I don’t. He’s not my jam, but if he’s yours, here are 75 minutes of him not just doing his set, but goofing around with his friends in a variety of foreign countries.

Wesley Morris: “There are montages of fans screaming love, support, and thanks into the camera. There’s some man-on-the-street stuff. There’s a self-mocking introductory sketch. There’s a bit about the size of his YouTube Channel and the love for him on Twitter. This is always a dubious strategy for a movie. We’re already here, dude. We know.”

Captain Phillips will probably be nominated for lots of Oscars, but it’s not the only film dramatizing the issue of hijacked freighters.

From Denmark comes A Hijacking (featuring beloved Borgen stars Pilou Asbæk and Søren Malling), in which a Danish ship is taken by desperate Somali pirates. Unlike Captain Phillips, A Hijacking is not based on a true story (or … not on any one true story in particular, I guess); however, it does co-star the MV Rozen — a ship that was actually hijacked in 2007 — as itself.

I’ve been to Disneyland in the recent past — at the height of summer, in fact — so hear me when I tell you that setting a movie described as a “surreal nightmare of paranoid visions” is kind of on the nose. But I kid, our dear leaders! (I really am kidding; I went with my young nieces and their excitement was adorable.)

In theaters simultaneous with its on-demand release, Escape From Tomorrow is something much more interesting than the currently stylish fake-found-footage film: It was shot on the sly at Disney parks. Perhaps you even saw its filming in progress …

Birth of the Living Dead

Nowadays a new zombie movie opens practically every weekend and a series about zombies is one of the most highly rated shows on TV. But there was a time when making a zombie movie was a risky, radical undertaking. (That time was 1968.)

Available on demand in advance of its theatrical release, Birth of the Living Dead documents the making of George A. Romero’s first zombie feature, Night of the Living Dead. The historical context that informed the story is described and illustrated with appropriately creepy segments of black-and-white-and-red animation, amid interviews with critics, commentators, and Romero himself.

Universal's Classic Monsters May Start Getting the Avengers Treatment