Video on Demand Report: For Those of You Nowhere Near the 353 Screens Where ‘Snowpiercer’ Is Currently Playing 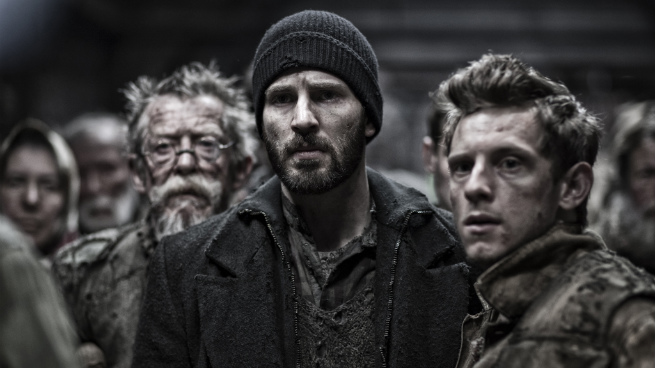 Human survival in a postapocalyptic setting is one of film’s favorite topics, with innumerable writers and directors considering the logistics and creating their own iterations on the idea. I’m pretty sure this is the first one that puts the entirety of the human race on a train speeding through the frozen landscape that resulted from a global warming cure gone very badly wrong.

Available to rent the same day as its wide theatrical release, Snowpiercer comes to us from Korean director Bong Joon-ho (The Host), and stars Chris Evans as the leader of a revolution from the underclass who live in the back of Mr. Wilford’s miraculous, eternal engine. But as he and his cohorts fight their way to the resources and riches enjoyed by the toffs at the front of the train, they come to realize that what passes for survival is not quite what they thought.

Wesley Morris: “The plot proceeds like a philosophical game. But the image of the film’s great unwashed swaying in unison as the train rocks along the track is a chilling one. To get a movie like this, one that works, near the height of summer feels good.”

If you didn’t see The Raid: Redemption, what you need to know is that it’s the story of a squad of super-elite cops trying to fight their way to a crime boss at the top of an apartment tower, in which literally every person is a criminal trying to kill them. (Did you see the remake of Dredd with Karl Urban? It’s the good version of that.) If you did see The Raid: Redemption, then obviously all I need to tell you is THE SEQUEL TO THE RAID IS OUT ON VOD.

I don’t want to oversell it, but if The Raid: Redemption was not the best ultraviolent Indonesian cop action movie I saw in 2012, it was for sure in the top 10. But seriously, it is incredible: The premise is ingenious, the pacing is relentless, and the kills are crazy.

The story of The Raid 2 takes off from the end of the first film — and since you can definitely make your own double feature at home, I won’t wreck it — but honestly … who cares if there’s a story, really? If you must know: Our cop hero gets a new assignment, which he attacks with zeal because It’s Personal, and lots and lots of dudes probably get their heads kicked in as he pursues the cause of justice. You paid for your own couch, but you’ll only need the edge, and after that you’ll be on the floor with a brain melted by the undeniable blood-misting insanity. I can’t wait.

It may seem as though Jason Bateman’s recent film roles, from Couples Retreat to Identity Thief to The Change-Up, are just slight variations on Michael Bluth, the Arrested Development role that revived his career a decade ago. But that’s just if you saw the trailers or watched these movies or know what they’re about and what he plays in them!

Maybe the reason Bateman’s been doing these Michael retread roles is that he was saving his big departure for his own directorial début — and here it is! In the black comedy Bad Words, Bateman plays a middle school dropout who exploits a loophole in the rules of a national spelling bee and enters, as an adult, to spite Dr. William Bowman, who’s involved in the competition and also happens to be the father who abandoned him as a child.

If you’ve already watched The Best Exotic Marigold Hotel a hundred times and Another Year is too depressing, good news: There’s a new movie about old British people that might split the difference!

In Le Week-End, Jim Broadbent and Lindsay Duncan are academics celebrating their 30th wedding anniversary with a trip to Paris. While there, they run into Jeff Goldblum, who went to university with Broadbent and is now very successful and fancy. Goldblum invites the couple to a dinner party that changes their perspective on life. (No word in the advance materials on exactly which menu item is so revelatory.)

We all know that David Lynch directed an adaptation of Frank Herbert’s novel Dune, to very little acclaim, in the early ’80s. What this film wants to know is, what if someone even weirder had made an even more exhausting version, in the ’70s?

Jodorowsky’s Dune is the story of director Alejandro Jodorowsky, who took over the option for Dune after the original producer passed away, and tried for years to make a film based on his own script — which would have resulted in a 14-hour movie. We’ll never get to see Jodorowsky’s version of the story — starring a cast including Gloria Swanson, Mick Jagger, and Salvador Dalí — but this documentary is the next best thing.

Roger Ebert is best known to most people who didn’t follow him on Twitter as half of the most famous film-critic duo in history. But there was a lot more to his life (which ended last spring, when he succumbed to the cancer he’d been fighting for more than a decade), which is what this film aims to document.

Released on demand the same day as its theatrical debut, Life Itself is based on Ebert’s memoir of the same title, and that’s just the beginning of its impressive list of contributors. It’s directed by Steve James of Hoop Dreams fame; Martin Scorsese and Oscar-winning screenwriter Steven Zaillian are among its executive producers. It has received rapturous reviews, and considering that they come from a group of writers who treasured Ebert, that’s a strong vote of confidence.

Q&A: ‘Dawn of the Planet of the Apes’ Director Matt Reeves on Nostalgia, Nerves, and the Joys of Destroying Humanity

'The Strain' Preview: Will FX's Viral Vampire Series Infect or Repulse You?