Video on Demand Report: Celebrate the Red, White and Pink with ‘The Grand Budapest Hotel’ 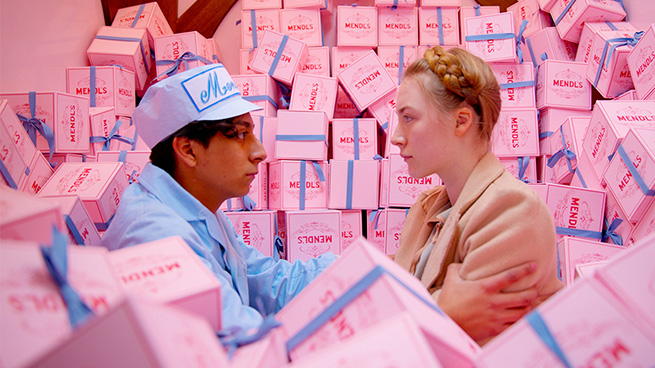 This year, I very sadly had to admit to myself that, like The Simpsons, the films of Wes Anderson had to join the category of “Things I Used To Love So Much But Which I Now Cannot Abide.” In both cases, I treasure the early canon and I always will; but there came a point when I needed to start pretending that the more recent work didn’t exist. In the case of The Simpsons: Season 8. In the case of the Wes Anderson filmography: The Life Aquatic With Steve Zissou (though I would hear arguments about forgiving The Darjeeling Limited).

In Anderson’s case, I realize this leaves only his three first films in the lifeboat, and it surely pains me more than it does you, unless YOU can also turn your head slightly to the right and see two different artists’ prints of the Tenenbaums’ house in cross-section on the wall, and also have a baby-pink Royal Tenenbaums case for your phone. I really tried with Anderson, but each successive movie felt to me like it had less humanity and more pointlessly stylish quirk than the one before. Then came Moonrise Kingdom, less a film than a tour through an especially twee Etsy store, and I was done.

But if YOU want to give him another shot: The plot here is a bit of a departure for Anderson, revolving as it does around illicit sex between a hotel concierge (Ralph Fiennes) and a succession of weird old ladies — one of whom (Tilda Swinton) leaves him a valuable painting in her will, kicking off a crime caper that also features Adrien Brody, Saoirse Ronan, Jeff Goldblum, Jude Law, Willem Dafoe, and Anderson stalwarts Jason Schwartzman, Owen Wilson, and Bill Murray.

The film was very well reviewed (it is also Anderson’s highest-grossing to date in the U.K.), so the odds are that if you rent it, you will enjoy it. If not, felt your displeasure on an ornate pillow and add it to your Pinterest page where Anderson is sure to see it.

Half of a Yellow Sun

In the late ’60s, a pair of twin sisters complete their education in London and return to Nigeria. But their exposure to the wider world creates distance between them and their family … and that’s before civil war breaks out.

Thandie Newton and Anika Noni Rose play the sisters — the former disappointing her family by moving in with her boyfriend (Chiwetel Ejiofor) outside wedlock, the latter by eschewing traditional female paths and becoming a successful businesswoman. Newton got typhoid during production in Nigeria; the least you can do is watch the film for which she sacrificed HER VERY HEALTH.

If last week’s spoofy They Came Together reminded you of the charms of You’ve Got Mail but you’ve already seen that 6,000 times, you may have a convenient alternative to rent.

The Lunchbox takes the idea of lonely people getting to know each other through their correspondence and relocates it to contemporary Mumbai. A dabbawala (a person who delivers food from workers’ residences to their offices) accidentally delivers a great lunch — and a sweet note — which Ila intended for her husband, to a stranger, Saajan. The two quickly figure out the confusion and strike up an innocent epistolary relationship of their own. But where will it lead?!

It’s kind of cute that Selena Gomez is starring in a movie called Behaving Badly, and that it’s coming out more than a year after she appeared in Spring Breakers. How much more badly could she possibly behave than that?!

Perhaps you (or, more likely, a young person in your life) would like to find out — and you can, because it’s available on demand now, in advance of its theatrical release. In it, Gomez and Rick (Nat Wolff, currently on screens in a supporting role in The Fault in Our Stars) embark on a chastely rocking road trip away from her boyfriend. But I bet he isn’t still her boyfriend when the movie ends!

Filed Under: VOD, Movies, the grand budapest hotel, The Lunchbox, Behaving Badly, Half of a Yellow Sun