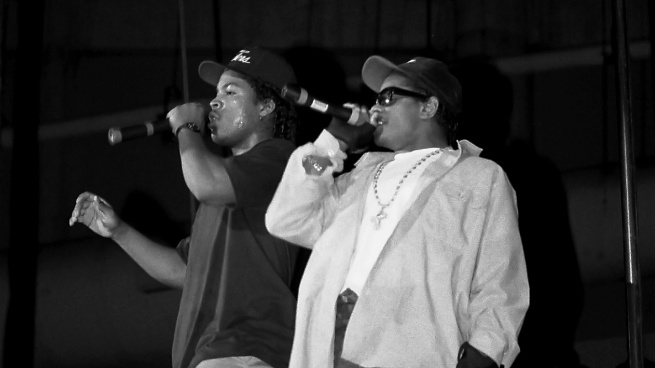 The N.W.A biopic Straight Outta Compton hasn’t started filming yet, but it’s already reopening some old wounds. The recently announced casting for the F. Gary Gray–helmed movie features relative unknowns Corey Hawkins as Dr. Dre, James Darnell as MC Ren, Terry Wilkerson as the rumored choice to play DJ Yella, and Ice Cube’s own look-alike progeny O’Shea Jackson Jr. in the role of his young dad. But Eazy-E’s camp is not thrilled with the selection of total unknown Jason Mitchell for the role of Eazy himself. Apparently, Eazy’s people had been pushing for his son Eric Wright Jr., also known as Lil Eazy E, but Wright Jr. was reportedly shut out of the audition process. Working against Lil Eazy is his age: He is 30 years old, while the other actors are considerably younger (O’Shea Jackson Jr. is 23) and, indeed, supposed to be playing the members of N.W.A in their early twenties, from when Straight Outta Compton was first released in 1988 through 1995, when Eazy-E died from AIDS complications at age 31.

The biopic has been somewhat fraught from the beginning. Eazy-E’s widow, Tomica Wright, only signed off on it after a lot of convincing. Ice Cube and Dre share a producing credit for the biopic, and while they say they are dedicated to making the movie authentic and true to life, if you remember anything about the group’s years-long feuding, it’s understandable why Eazy’s camp might still be slightly wary about their intentions. The group split up when Jerry Heller became its manager and, according to the other members, showed Eazy favoritism. Ice Cube left N.W.A in 1990 after declaring the contract offered to him by Eazy’s Ruthless Records to be bullshit, and N.W.A started dissing Cube immediately on that year’s 100 Miles and Runnin’ EP, referring to him as a Benedict Arnold. Ice Cube hit back at Eazy and Heller with “No Vaseline” off of 1991’s Death Certificate, calling Heller a “devil” and mocking Eazy for attending a lunch with Republicans including President George H.W. Bush.

By 1991, Dr. Dre was also asking to be let go from his Ruthless Records contract, to no avail, at which point it’s been said he called on Suge Knight for backup. Suge tried a few different tactics — pretending to have kidnapped Jerry Heller, threatening Eazy’s wife and children, and letting Eazy know that Suge knew where Eazy’s mother lived with a note that read “I know where your mama stays.” The threats were real enough that Eazy eventually did let Dre abscond to eventually found Death Row Records with Knight. The feud returned to wax with 1992’s The Chronic, with Dre delivering indelible Snoop Dogg–penned shade aimed at Eazy like “Youse a penguin-looking motherfucker” and the long direct burn in “Bitches Ain’t Shit” that begins with “I used to know a bitch named Eric Wright” and directly invokes Jerry Heller.

In the 1993 video for “Dre Day,” a character named “Sleazy-E” is shown getting shot and panhandling by the freeway with a “Will Rap for Food” sign. Interscope’s Steve Berman played a greasy stand-in for Heller, who is shown ripping off Sleazy. Heller did rip off Wright, taking 80 percent of the profits from Ruthless, all the while assuring Eazy that it was how the music business worked.

At the height of the tension among the former members of N.W.A in the early ’90s, Jerry Heller acquired bodyguards for Eazy from the Jewish Defense League who were better equipped to negotiate with Suge Knight. The FBI falsely assumed the JDL-Ruthless connection was a money laundering scheme, but according to Heller, the organization was interested in the gig because Eazy-E also received death threats from Nazi skinheads. In 1993, Eazy put out the EP It’s On () 187um Killa, featuring vintage photos of Dre in roller-disco finery and glittery makeup from his early days with the World Class Wreckin’ Cru. The EP was the last release Eazy completed before he died. It went multiplatinum on the strength of singles like “Real Muthaphuckkin G’s” and “Gimmie That Nutt.”

In 1995, Eazy-E announced in a public statement that he had contracted AIDS. Upon hearing this news, Dr. Dre and Ice Cube both made peace with him. The feud had been productive creatively, helping to produce some of the greatest hip-hop to date and stoking sales for all associated acts. But the death wishes the artists aimed at one another in verse were never really meant seriously, and underneath the artistic vitriol was hurt that the trust within N.W.A had been broken. Dre, Cube, and Eazy had all come up together and completely changed the world. After Wright’s illness became public, everyone involved just wanted to patch things up, which it seems they would have probably done eventually anyway. All three men ultimately respected one another as artists and humans.

This is why the drama over the Straight Outta Compton movie needs to be handled gingerly. Dr. Dre and Ice Cube presumably want to honor the group’s legend and story, but they are also going to be the first to tell Eazy’s story on film, and they have to prove they aren’t going to paint him as Sleazy-E again. Not letting Eazy’s son audition is not a good look for the movie from a PR standpoint, and Jerry Heller told TMZ he disapproves. Dre and Ice Cube may have forged a truce with Eazy-E, but they might still not be super keen on Jerry Heller. At the peak of the feud, the fault lines in N.W.A and subsequent rivalries saw the three former close friends diverge and battle for supremacy. But looking back, it seems obvious the lives and stories of the members of N.W.A are inextricable. Hopefully, Mitchell will be able to adequately carry the mantle of the charismatic fireball that was young Eazy-E. At least they didn’t cast a penguin.

Video on Demand Report: Celebrate the Red, White and Pink with ‘The Grand Budapest Hotel’

25 Thoughts on the 25th Anniversary of the ‘Seinfeld’ Premiere