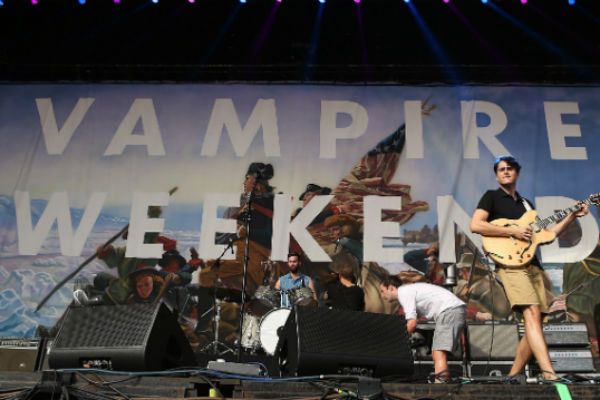 Vampire Weekend is almost like the indie-rock Coldplay: You get easy cred points just for dismissing them as soft or boring. Which is dumb because (a) dismissing anything without a full and true approximation of its worth is a terrible way to live your life (P.S. I have more wisdom, feel free to ask) and (b) Vampire Weekend actually slays pretty hard. But that’s just the way it is for those dudes; life as a target is part of the fame/success/money/adoration package. That said: Usually dudes get salted about Vampire Weekend’s boat shoes, not the fact that they torched a Saab.

Spinner’s got the story: “Vampire Weekend … inadvertently angered enthusiasts of the Swedish car manufacturer by burning two of its discontinued 900 series cars in a upcoming single ‘Diane Young’ … ‘I don’t even have anything snarky to say about this one,’ Jalopnik writer Patrick George wrote in an article subtly titled Vampire Weekend Are A Bunch Of Dicks. ‘I’m just gonna go off somewhere and be sad for a while.'”

Here’s the Jalopnik article, which is very much not a joke. Writes George, somberly, “I was hoping that the two 900s were old, decrepit, maybe found in a junkyard or damaged beyond repair in Hurricane Sandy, and that they were being sent to a better place. This is apparently not the case, and the real story will upset you a great deal.” And here’s the video, which plays off the song’s lyric “You torched a Saab like a pile of leaves.”

Knowing how damaging this violence-toward-Saab situation can be, Vampire Weekend front man Ezra Koenig gave Spinner a quick mea culpa: “I want people to understand that we do respect cars and the last thing we want to do is to fuck up a collector’s item or something like that. Hopefully people believe me when I say that our record label was looking to purchase the cheapest, oldest cars possible; they weren’t trying to buy a beautiful perfect condition car … From what I understand those old ones actually had a lot of electrical problems. If the people selling their cars felt mislead [sic] by the production company that bought them… of course if we had been there, if we had been a part of it we would never lie to somebody just to get a car — we could have easily found something else.”

Most importantly: “[Multi-instrumentalist] Rostam [Batmanglij] especially loves Saabs. When he grew up his family drove a Saab.”

OK, now can we go back to being mad at Vampire Weekend about its boat shoes?

Related: Here is Vampire Weekend rocking jams for QTV. It shows up at 6 minutes, 19 minutes, and 43 minutes in (thank you people at SPIN for figuring that out for us).