Unlimited Do-Overs: Why Do We Love Choose Your Own Adventure Again, Now? 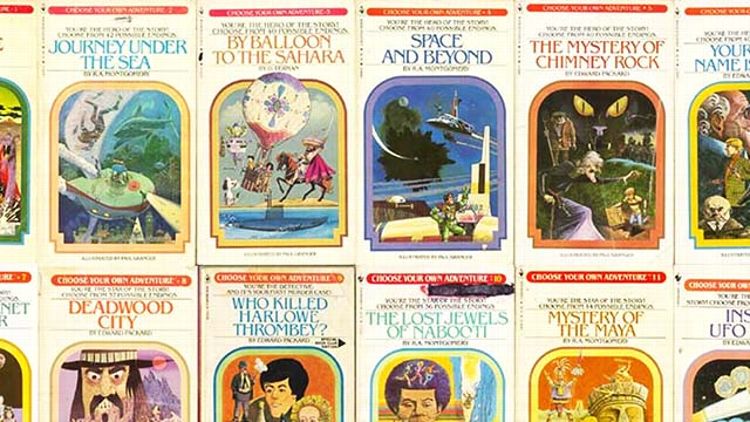 Though we haven’t yet decided on the definitive time cycle for nostalgia, the Choose Your Own Adventure series that peaked in popularity during the ’80s and ’90s is enjoying a sentimental renaissance. Maybe that’s because the series is being developed into a movie franchise, or maybe it’s just because the former bookish tweens who turned to Page 7 if they wanted to meet with a Mayan expert at a university rather than head straight to the ancient temple are now adults whose adventures to date have already been chosen.

In a recent New York Times op-ed, writer and cartoonist Tim Kreider discussed a phenomenon he referred to as “The Referendum,” a mental shift he calls “typical of (but not limited to) midlife” during which you gaze upon the lives of your contemporaries with vacillating amounts of envy, curiosity, and smugness. You stop comparing your existence to others’ in terms of borrowing inspiration from their successes, replacing that hopeful situational swap with something more philosophical. That dude over there, your peer in every way, has a life so different from yours that you wonder if you might have ended up like him if you’d only flipped to a different page when prompted by the generational manual known as existence. Maybe social media makes The Referendum more accessible to anyone, regardless of age: Why wait to start feeling that special combo of dread and regret until you’re well into your forties? We’re precocious. We start looking forward to our existential crises well before we hit 30, or pretty much as soon as there’s anything to look back on at all.

If we’re becoming accustomed earlier to this self-examination when it comes to our choices, we may as well play with it. Us ’80s kids still like to play, because we’re actually not nearly as old as we think we are, or as our growing digital archives would lead us to believe. You could — if you maintained, say, a Tumblr — dive back into your personal history and watch yourself make mistakes that you now know changed the course of your fate. Don’t do that. It’s not fun. I flew to England and watched an episode of the U.K. series Black Mirror that spelled out exactly why rewinding your life’s reel for perusal is a tragic sinkhole. It’s better to keep the fantasy of exploring every possible scenario and outcome in the fictional space, where it’s actually possible and you never have to say the words “if only.”

The Choose Your Own Adventure series was ideal for kids whose parents restricted their exposure to video games (ah, those old dinosaurs of video games, when you had to pedal to power the joystick and the “WHAM”s and “POW”s came out of the gramophone), kids who liked to isolate themselves with solitary play because they were bossy or unpopular (I’m not hating, these kids became the coolest adults), and “other” (raised by a pack of wolves who nested behind a library). Choose Your Own Adventure is the most famous game book, but by no means the only game book: Jorge Luis Borges was writing proto–game books in the ’40s; “solitaire adventures” based on the format gained fans in RPG communities; there’s even CYOA-style erotica (“YOU create your slave girl. YOU make all the choices. But beware — every slave girl in the manor seeks the same ends, and the mistresses deal with insubordination harshly!”). Judging strictly by Amazon reviews, adults are harsh critics of interactive literature made just for them, though the market is there: Nearly every one-star critique kicks off with a mention of how dearly beloved the CYOA canon was to the reader, but that reader has something specific in mind, a need that hasn’t quite been met (at least not by Pretty Little Mistakes: A Do-Over Novel).

Supernatural, the Television Series: The Roads Not Taken — an interactive companion book to the CW show Supernatural — was released today. It has a pitch that makes it sound like the Mad Libs of fan fiction: “Demons, spirits, and ghouls lurk around every corner, waiting to get the drop on Sam and Dean — and only by following all the clues, interviewing the right suspects, and making the right choices can the reader lead them to victory.” It’s not exactly Borges, but I could imagine spending like an hour seeing what would happen if Larry bit his tongue in Curb Your Enthusiasm: The Accidental Slight Not Administered. Horse_ebooks’s son and sole heir, the Internet adventure game Bear Stearns Bravo, has earned comparisons to CYOA and ’90s-era multimedia, and though it’s a video platform instead of a book, it’s riding in on the back of its text-based protagonist. Last month, NPR did a story on a CYOA-style Hamlet, titled To Be or Not to Be: That Is the Adventure, and the original series has even inspired a printer called the Choosatron that prints mutli-plot story lines on receipt paper. It’s been 34 years since the publication of the first Choose Your Own Adventure book, The Cave of Time, in 1979. If The New Yorker’s Adam Gopnik is right, that means we have six years to iron out the kinks before this medium hits its prime nostalgia point. It may take a lot of work, but one day we might come up with something to rival Who Killed Harlowe Thrombey? That is, if we don’t skip ahead to Page 34, where we find we have been made prisoner of the ant people.

The Pornopticon: 'Don Jon' and Sex in the Porn-on-Demand Age