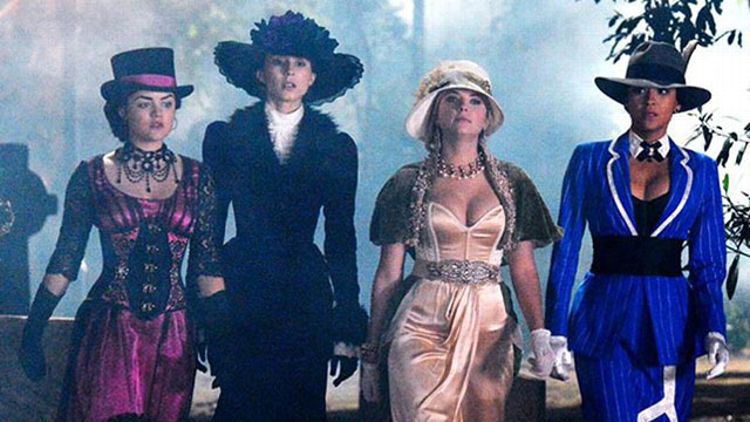 No, your eyes are not deceiving you. This is not a mirage. It’s a new recap of Pretty Little Liars on Grantland.com.

The plug was pulled on these recaps in March, but now the shutdown is over and we’re back. Maybe for only a few more hours, but we’re back nevertheless.

And I haven’t seen an episode since the Season 3 finale.

Why lie? I missed these girl liar murderer fashonistas so much.

Drunk Emily looks like Dick Tracy, Hanna is a flapper, Aria has somehow transformed into a ringmaster Khloe Kardashian, and Spencer Hastings is Mary Todd Lincoln. This is fantastic.

They’re crashing a party. Whose, I have no idea, but it’s in a graveyard, which seems like an ideal place to party when you’re always almost dying.

Spencer goes in first, because she’s always about that life, and Emily gets nervous and doesn’t want to enter, assumedly because she’d rather pregame than party. Then Spencer says, “We have to get to Alison before -A does.” Which means Alison is still alive. And Alison is not -A. Sure, why not? After some convincing, Emily comes in with the Liars and they make their way into the graveyard party.

Temporarily leaving the place where all the dead bodies are buried in the ground, we see Mister “Guess Who Got His Own Spin-off Show On ABC Family Betcha Didn’t See That Coming, Marcy Projects, Marcy Son, What” himself, Caleb.

Why so forlorn, Faux Riggins? You just got your own show, cheer up. Anyway, he’s on a bus and, in typical Pretty Little Liars fashion, it’s storming outside and the bus is abandoned with the exception of one other man in the back, and of course the bus driver, who is probably an ax-wielding ghost.

And in case you’re wondering, the guy in the back: completely normal and harmless, definitely lacking any type of agenda.

Back to the “18 to stand up, 21 to fall down” graveyard rager. As the girls proceed to walk, Hanna stops, obviously distracted by something.

They all stop, startled. AND THEN THEY JUST KEEP GOING, AS IF THOSE AREN’T KILLERS.

I’ll never understand these four women. I’ll continue to try, but never will I get them.

Continuing on, Aria’s phone rings. Calling: the worst man ever.

Evil Ezra. Well, Aria doesn’t think he is, but look at him. Where is he? Why that outfit? He’s very concerned about Aria’s whereabouts, which does make sense considering he’s old enough to be a chaperone at her prom.

He’s talking like a robot and it’s freaking me out. She tells him the truth, that she’s in a graveyard in Ravenswood, and he responds that she needs to be careful. And then they hang up.

After the call, we see a figure hiding around the corner from the girls. GREAT. Just gre—

This is so bad.

Sure, he could just be testing Aria to see if she tells him the truth, or he could be in hero mode, always trying to protect her, but chances are he has a musket and is ready to use it on the girl from Spring Breakers.

Back on the bus, Faux Riggins has a visitor sitting next to him. But it’s not the old creepy guy.

I don’t know who she is, but she’s a new character, has no parents, and is really trying to steal the old guy’s chips. They talk for a while, but it isn’t important.

Back to Thirsty Thursdays at the graveyard, where they spot a man in a familiar costume. Hanna wants to confront him to see if he’s -A, but gets overruled. They split up, following the man and a woman who appears to be him. And then Emily gets her arm grabbed:

WHAT. DOES. THAT. FOREST. CREATURE. WANT. WITH. EMILY.

After this scare, a scene on the bus that no one cares about, and then back to Aria chasing after a potential -A. Alone. At night. In a graveyard.

Yep. Someone grabbed her leg. Of course.

And back to Club Tombstone, where Aria was not being attacked. On the contrary: The woman she was originally chasing got pushed in a hole and grabbed Aria’s ankle so as to not fall further down said hole.

She seems nice enough. Not the killer type. Probably telling the truth. Anyway, after an awkward conversation, the four girls finally find one another. Before we move on, take another minute to look at Emily’s outfit.

She looks like the third alternate in the “Lady Marmalade” video.

As the quadpod walks to the party tent, they spot a girl running through the woods. They think it might be Ali. So they follow “her.”

Down a hidden staircase.

But in a surprise turn of events, when they walk downstairs, the door didn’t close behind them.

OF COURSE IT DID. This is Pretty Little Liars, America’s no. 1 show about doors closing on their own and locking four sketchy women in mausoleum staircases.

In the middle of the terror, crowd-pleaser Hanna is still firing MVP one-liners. When asks if anyone has cell phone service:

They’re walking through this lair, and then a windstorm suddenly appears. So they all hold hands and stand against the wall.

And then the windstorm ends. And they all look up to see if the other’s OK. Aria turns to her neighbor, Hanna, and:

Somehow, Aria didn’t notice that the person next to her whose hand she was holding was traded out for a statue.

So yeah, Hanna’s gone. Or got turned to stone. Or something. Anyway, this is all Aria’s fault.

And now we’re with Hanna, who has not turned to stone. She just, somehow, got completely separated from the group during the wind storm. She’s looking for her girls, then stumbles on a kind note:

Hanna takes off her gloves and gets super-CSI on us by taking a blood sample with her finger.

And then bats show up.

And then rats show up.

And now Hanna’s on the move, because bats + rats are not ballin’. So she makes a run for it, finds a stairwell, busts through the door, and finds herself in the Shrine of the Silver Monkey.

After playing the piano, she leaves, presumably headed for the observatory. Unfortunately for her, there’s a Temple Guard on her trail.

AND I THINK IT’S EZRA.

After a good-bye between Faux Riggins and his busmate, whom we learn is named Miranda, she wanders off and he enters the graveyard.

Following this, an actual thrilling scene involving Hanna getting locked in a phone booth (of course), the phone not working (because duh), and then evil druids seemingly forming around her to sacrifice her to the gods (slightly unexpected).

But then, right when Hanna was definitely about to die, they disappeared. So, for now, Hanna’s safe.

Back to our girls, and they’re scared, which is to be expected. In under 15 seconds, Aria makes a comment about zoning laws and Emily starts talking about the Underground Railroad. Just inexcusable.

But then a drop of blood falls on Spencer’s hand. And it’s from the ceiling. The ceiling is bloody. That’s always the first sign one should wave the white flag and surrender: a bloody ceiling.

Perhaps the room upstairs is filled with blood. Who knows? Regardless, the three hear someone say “My friends will find me,” causing Spencer to run toward the sound.

When Aria and Emily follow her through the doorway, Spencer’s gone. And, just like that, there were two.

Back to Hanna, and she’s still freaking out, locked in the telephone booth. But then a face appears outside.

In a matter of seconds, it went from “Yay” to “Nooooo” to “Who is this girl?”

Over the next five minutes, a number of things happen that aren’t worth explaining. But know that Miranda and Hanna become friends while Emily and Aria almost get decapitated.

And now, finally, we’re with the queen — my queen — Spencer Hastings. Also suddenly with Spencer:

GET ’EM, GIRL. She goes over to take off his mask, but then:

Yeah, he came back. He really must not have appreciated the Chris Tucker taunt.

A few minutes later, Emily and Aria find Spencer, they wake her up, and then they follow the “help me” screams that they’ve been hearing all night.

And then they finally find her. This is it, people.

IT WAS A RECORDING.

I DON’T CARE ABOUT ALI.

(See you next Halloween.)

Afternoon Links: Triumph the Insult Comic Dog Will Take the Deliciousness Right Out of Your Expensive Beer