The Teen Choice Awards: The Teens Have Spoken. Here Is What They Had to Say. 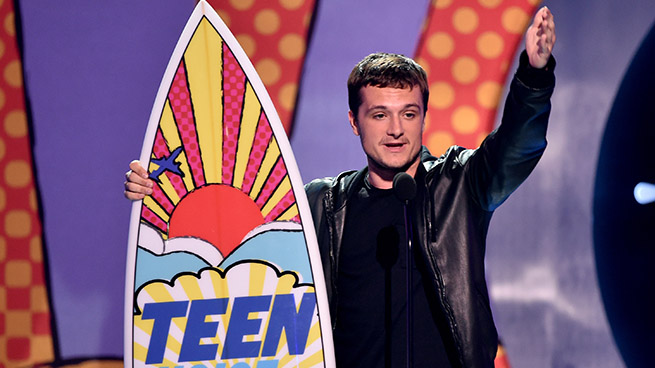 The teens have spoken yet again with the airing of the 2014 Teen Choice Awards. And if you thought they spoke loudly last year, just know that 2013 teens have nothing on 2014 teens.

Divergent had a huge night, winning four surfborts. One of those surfborts even beat itself (Ansel Elgort over Theo James for Choice Movie Breakout Star). That’s mostly because Elgort was also in The Fault in Our Stars, which won seven surfborts. It seems as if the teens have spoken on Theo. And he’s no Ansel Elgort!

Hemsworth or Hutcherson? More like Hemsworths Plural or Hutcherson Singular. Spoiler alert: The answer is still Josh, according to teens. Hutcherson took home Choice Movie Actor: Sci-Fi/Fantasy, in a category with the brothers Hemsworth, Andrew Garfield, and Chris Evans. Take that, Oceania!

Is Jennifer Lawrence still America’s Sweetheart? Not according to teens, because here comes Shailene. Lawrence won for Choice Movie Actress: Sci-Fi/Fantasy, but came up short in two other categories, both to Shailene Woodley. And one of those was Choice Movie Liplock. Looks like Shailene and Ansel are the ones CATCHING FIRE!

What a year for vampires, say teens everywhere. Vampire-related properties earned 10 nominations between The Vampire Diaries and Vampire Academy. The Vampire Diaries proved to be the most popular, winning four surfborts, only losing to itself (Ian over Paul, Nina over Kat) and Teen Wolf. But that’s OK, #Vampirers, because Teen Wolf also lost to The Vampire Diaries. So who reigns supreme, according to teens? Wolves or vampires? It’s too close to call. Either way, SOMEBODY’S GETTING BIT! BY A PIECE OF FOLKLORE!

Have the teens moved on from One Direction? I’ll give you one hint. NO! The boys from England beat some of everyone en route to eight surfborts, from Fifth Harmony to The Vamps to 5 Seconds of Summer to Katy Perry to Beyoncé and Jay Z to Zac Efron to Justin Timberlake to Ian Somerhalder. They had no mercy, beating Rixton in Choice Music Group and The #Harmonizers (Dan Harmon diehards) in Choice Fanatic Fans. 1D even won Choice Male Hottie. AND THE CATEGORY IS SINGULAR!

The teens still love sports, and this year, it was LeBron James and Serena Williams they love the most. But perhaps the biggest shocker: a nomination for Meryl Davis in Choice Female Athlete but no Charlie White in Choice Male Athlete. What, you thought the teens would just automatically let both in? Heck no. These are teens we’re talking about. And nothing screams betrayal to the teens like getting engaged to someone who isn’t famous. In case you didn’t think they noticed, Charlie, you were wrong. THE TEENS NOTICED. AND NOW THEY HATE YOU! THEY HATE YOU FOREVER!

As for Michelle Phan, she didn’t win anything, a sign that perhaps the teens feel their voices have already been heard vis-à-vis Michelle Phan.

All 89 categories can be seen here, and I suggest you read the list thoroughly. Because the teens have spoken. Eighty-nine times. And that number is prime. Which, trust me, isn’t a coincidence. Trust me!

This Isn't Enough 'Better Call Saul' to Last Us Till February, But It's a Start