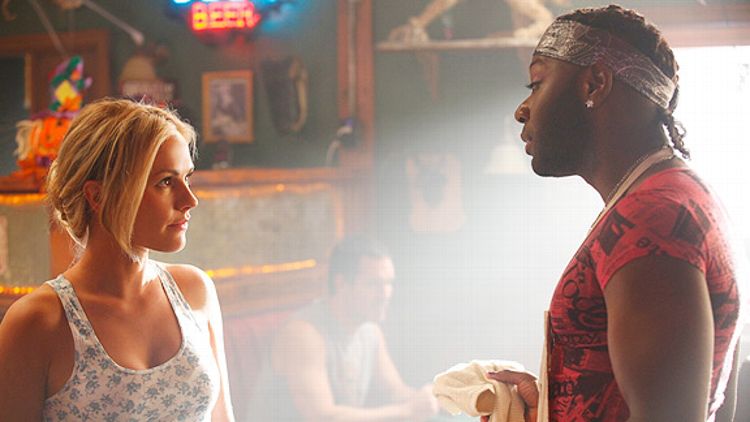 So Jessica finally gets to the door during the witch incantation that makes all the vampires go lemming themselves into the sun, but Jason Stackhouse jumps to save her just in time and the industrial mansion fans from Meatloaf’s “I Would Do Anything For Love” come on as his chivalrous instinct gets thwomped by her vampire reflexes. Jessica ends up on top of Jason, where he has recently guiltily fantasized about her being. She apologizes for almost killing him by kissing him, which makes him stammer but then kiss back.

Bill is waiting for Jessica to finish dry-humping his ex-girlfriend’s brother in the hallway by the staircase (subtheme of this season: sex in front of indoor stairs. One more for a hat trick.) Jason silvers Jessica back down and is forced to make extended eye contact with her after having shown his boner cards. Bill and Jess agree not to snitch on him for killing the guard, and he bolts. Damn Jason has been a cop all of like five minutes and he is already crooked.

The werewolf leader, with his Suga Free hair and Suga Free like approach to relations between the sexes, is lecturing the other shifters and advising them to buy more leather and denim and flannel. (The werewolves live in Brooklyn?) Sam shows up at Luna’s house to beg forgiveness for his brother raping her. Although technically then he tries to makes her feel bad for his brother? Who raped her? But then her cute daughter Emma shows up with Barbies and the fact that Sam is a capable present father figure for her child trumps all of last week’s raping.

Sookie pulls Eric’s neckchains off and then offers him the opportunity to drink her blood. This relationship is going really … fast. Sookie makes some weird faces and then some weird kind of human-vamp sex act. Jessica has an elaborate fantasy where she dumps Hoyt, makes him cry, murders him, and then hops in Jason Stackhouse’s truck with her fangs and her cardigan. She wakes in her cell with a human downer offering herself in a robe.

Sherriff Sobotka and Jason Stackhouse investigate the former Mrs. Beulah Carter, who is now some vampire fruit leather on the sidewalk. Sobotka is addicted to V, which apparently curbs his testosterone rage problems. Bill is so smarmy now that he is a politician! He speaks on vampire rhetoric. So now glamouring is like lying for reasons of self-interest? Smartish, True Blood.

Eric and Sookie have the grossest romance novel fairy blood sex in the history of fictional intercourse. Trying to depict the sex between two characters that have had tension/history for a few seasons is a fairly impossible task. Fan expectations are so high that it’s bound to be disappointing, unless it surprises in some way. The Friends episode where Ross and Rachel finally did it in the Natural History Museum diorama was an example of getting it right, but that is because it combined the sex with the idea of having it in a Natural History Museum diorama.

Sookie and Eric touch tongues in some lace curtains, but then it turns out they’re in the shower! But then the shower drizzles snow on them. They get to screw on a bed outside in some set-decorated fairy tale woods! In some blue gel lights! In Narnia! And Eric says “Can we make love in it?” which I believe translates to “kill yourself, audience” in Norse. Eric Northman and all the other vampires on this show are intended to be superhot funny jerks that like rough sex, not this crap. Oh I just got that Bill and Eric switched personality roles. Duh.

Marnie is Antonia, which means she is Marnie with a silly theatrical Spanish accent. She promises to empower Tara, but she means to kill vampires. Bill calls to request a vampire-witch peace-keeping meeting, which she grants him. Tommy is sneaking around and stealing from people. Debbie and Alcide are all PDA at the werewolf pack trash-fire, and Debbie begs him again to stay away from Sookie.

Jessica comes home and breaks up with Hoyt for real, and it sucks. Lafayette gets possessed by the Creole nanny ghost. Eric and Sookie show up as a couple to make Bill feel bad. Sookie pledges herself to be Florence Nightengale for vampires. Sam’s family dinner with Luna and Emma is interrupted by the appearance of were-Suga Free, who is here to deliver some serious pimping.

Jessica goes to Jason’s place where he refuses to sexually betray his best friend. As with all fantasy narratives, nothing goes according to Jessica’s mindplans. Jason is watching Cheaters on TV (nice touch) and expels Jessica from the house. Ghost Creole nanny Lafayette kidnaps Terry and Arlene’s baby.

Bill faces Antonia’s witch flock in the graveyard with his vampire army. Sister against sister in a civil war. And then shit gets real! Laser beams and fog machines, it’s a disco graveyard, which means Pam shows up with her new old face and studs. Bill forbids her from killing Tara. Sookie Iron Mans somebody with her fairy palm, then gets hit and falls. This is some goofy Thriller business.

Dr. Dre Now Has 309 Million Reasons Not to Finish Detox