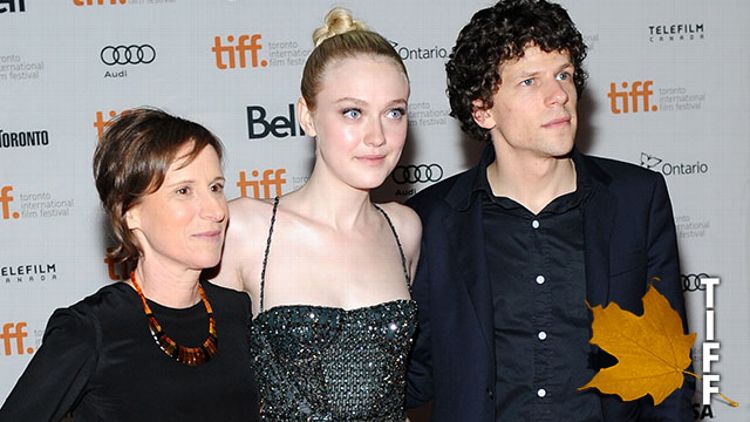 By now you might have heard the big news out of Toronto yesterday. A blogger called 9-1-1 to report someone using a phone during a new Ti West horror movie. That was not big news in Toronto. It never came up in any conversation. But there’s time. (For the record, when a moviegoer uses a phone near me, I lean over and put my hand over the screen.) The big movie news was supposed to be the unveiling of an adaptation of Tracy Letts’s play August: Osage County. But the press and industry queue had started to fill up two hours before the film’s screening time. So Meryl Streep vs. Julia Roberts will have to wait until Christmas Day.

While people were positioning themselves for that, I got to see Jake Gyllenhaal play double roles as both a professor and an actor in something called Enemy, directed by Denis Villeneuve. It’s a mess based on José Saramago’s novel The Double, and I saw it by accident. Errol Morris has a new documentary here about Donald Rumsfeld, and I’m embarrassed to say I missed it because I thought his movie was called Enemy. Doesn’t that just sound like what Morris might have called a movie about Rumsfeld? Or is that me being presumptuous? Either way, the actual title is, of course, The Unknown Known. But that’s what this Gyllenhaal movie could have been called!

Anyway, Villeneuve remains a frustrating movie proposition. Another of his movies, Prisoners with Gyllenhaal and Hugh Jackman, opens next week. Enemy has creepy atmosphere, a wonderful performance by Sarah Gadon as the pregnant wife of one of the Gyllenhaals, and a last shot that made me jump out of my seat. The problem is that the setup for the encounter between the doubles lacks the mystery and wonder you need to care. Otherwise, it’s a good actor acting into a mirror, and that is not quite enough.

I also got to see Fernando Eimbcke’s Club Sandwich, a Mexican minimalist vacation comedy in which a hipster mother (María Renée Prudencio) and her teenage son (Lucio Giménez Cacho) laze about a mostly empty resort. Eimbcke has an easy way with situational humor. He creates just enough intimacy between these two for us to worry that something incestuous might set in. He then introduces another teenager, a girl (Danae Reynaud), and things get sexy. This doesn’t have the quiet magic of Eimbcke’s Duck Season or Lake Tahoe. But it’s funny and strange enough not to forget once you’ve left the theater. It also makes metaphorical use of that title. A club sandwich is something you eat. Once in a while, it’s also something you are.

About 40 minutes later I watched Jesse Eisenberg, Dakota Fanning, and Peter Sarsgaard in a club sandwich of their own. This came with a pickle. They play radical environmentalists from Oregon in Kelly Reichardt’s Night Moves, which is not to be mistaken with the 1975 Gene Hackman detective thriller or Bob Seger’s album from 1976. The pickle in Reichardt’s movie occurs after these three blow up a hydroelectric dam, and it’s entirely moral. Something happens in the bombing, and Reichardt and her regular writing partner, Jonathan Raymond, turn the stress of the mishap into a low-pulse thriller.

Reichardt’s movies include Old Joy, Wendy and Lucy, and Meek’s Cutoff. She isn’t a genre director. She’s a realist and an observer of people in situations of her own devising. This is the first film in which she contemplates scratching a commercial itch. And I’m excited to see where she takes that experiment. In the meantime, this movie — with its cold-blooded climax — is like a 1960s French thriller in Red Wings and a Carhartt jacket. As for Eisenberg, he can make sense in any modern setting; here it’s a midsize organic farm. (He’s also playing doppelgängers in a comedy here called The Double, which is more Dostoevsky than José Saramago.) Reichardt is also interested in the impurities and naïveté of environmental-movement personae. To that end, the movie is a keen, chilling snapshot of evil. Don’t let the “organically grown” label fool you. That cute guy at the farmers market might want to kill you after all.