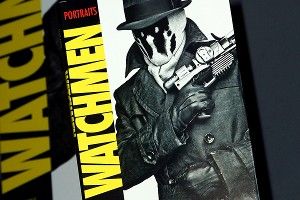 Yesterday — in a press release that accomplished in seven paragraphs what could have been taken care of with a list of titles and street dates and the words Tell your god to ready for blood — DC Comics announced plans to revisit the Watchmen universe in seven new miniseries that will act as prequels to Alan Moore and Dave Gibbons’ revered, massively influential work of superhero eschatology. Gibbons, the artist of the original series, gave his blessing in the form of a measured statement wishing all the best to the A-list talent DC’s talked into throwing their bodies on this grenade; writer Moore grumbled something about the company’s continuing dependence on ideas he had 25 years ago and then went off somewhere to burst into flames. Noted reactor-to-things Adolf Hitler, who was not exactly enthusiastic back when chatter about a sequel to Watchmen ramped up in 2010, had yet to weigh in at press time, but comics fans on the Internet were — well, look, nearly everybody saw this coming, so the reaction was less of a der-Fuhrer-pounds-the-table meltdown and more of a deep collective sigh. Expecting a major publisher not to do stuff like this because cool people will think it’s gauche is as bad a bet as airport sushi.

Aside from “After much soul-searching and careful scrutiny of everybody’s sarcastic blog posts, we have decided to cancel Before Watchmen,” there’s literally nothing anyone involved with this project could have said about it that wouldn’t have qualified as trolling. Darwyn Cooke, who’s writing two of the seven prequel books, told Entertainment Weekly, “I’d consider [Watchmen] a masterpiece if it had been able to have found what I would refer to as a hopeful note,” and if you’re familiar at all with Watchmen, you know that’s kind of like saying you’d consider Moby Dick a masterpiece if it weren’t so “boat-y” — but I’m not going there, OK? I refuse to be trolled by you, Darwyn Cooke! Yes, prequels are for cowards, although DC co-bigwigs Dan DiDio and Jim Lee were brave enough to invoke their “responsibility as publishers” in the above-mentioned press release, and if I had a set of brass balls as big as the ones it took to say that, I’d quit writing and join whatever circus would pay me the most to travel the country showing them off to rubes. Yes, in the wake of last year’s equally controversial New-52 initiative, DC’s clearly doubling down on the all-important I-just-want-to-see-how-bad-it-is demographic. Yes, like every other Watchmen nerd on the planet I’m weirdly eager to see how this act of cultural necrophilia actually plays on the page.

Some historical context: Pretty much every iconic, transmedia-exploitable superhero comic introduced prior to the creators-rights struggles of the late ‘70s — and most of the ones introduced after that, although Todd MacFarlane does personally cake up every time somebody buys the latest Spawn — was created as a work made for hire, so whoever owns the company that published the original comics owns the intellectual property therein. The people who wrote and drew those comics signed contracts back when the idea that their work would stay in print for decades or inspire multimillion-dollar movie franchises would have seemed only slightly less farfetched than the Hulk’s origin story, and the courts have affirmed the validity of those contracts time and again. Marvel Entertainment makes a lot of comics (and the occasional massively lucrative summer-tentpole movie) based on characters Jack Kirby created or cocreated and doesn’t pay Kirby’s estate for the privilege because legally it doesn’t have to. Superman creators Jerry Siegel and Joe Shuster and their heirs have fought what I apologize in advance for calling a neverending battle over the revenue generated by the Man of Steel, even though Siegel and Shuster sold the character to National Comics Publications for beads and trinkets back in 1938. Anyone planning to boycott Before Watchmen on principle because Alan Moore objects to how DC’s handled his work might want to consider how that same principle applies to Superman and anything that builds on Kirby’s back catalog; Moore’s situation isn’t unique just because he’s still alive and available for withering comment.

The one thing people who hate the idea of prequelizing Watchmen and the open-hearted placers-of-trust-in-the-makers-of-things who’ve suggested it might not be a travesty seem to be able to agree on is that whatever happens, it can’t really “ruin” Watchmen, just like George Lucas hasn’t actually ruined all the childhoods he’s accused of having ruined, because ILM has yet to invent time travel. Fair enough. But is it weird if I kinda hope these prequels do diminish the towering legacy of their source material just a little bit? The way purists reacted to Zack Snyder’s Watchmen movie, you’d have thought the Vatican had let Christian Audigier splatter tigers and skulls all over the ceiling of the Sistine Chapel — which is weird, because whatever you think of the movie’s tone or its ideology or its hamfisted use of “The Times They Are A-Changin’” and Leonard Cohen’s “Hallelujah,” the thing that really undid it was its slavish fealty to the original text. A lot of things that worked on the page in 1986 seemed sort of ridiculous when spoken by live humans on a movie screen; it was Moore, not Snyder, who put the line “What’s happened to the American dream?” in a character’s mouth unironically, and it was Moore who wrote all those Rorschach monologues where he talks like a 15-year-old boy who’s seen Taxi Driver too many times.

Watchmen is a staggering piece of work; every time I pull it off the shelf — usually when I’m trying to fact check some detail while writing an iconoclastic takedown of its legacy — I end up getting sucked back in, 12 years old and mindblown again. It belongs in the pantheon based on Dave Gibbons’ artwork alone. It’s the Easy Rider of superhero comics, the Rite of Spring of superhero comics, the Birth of the Cool of superhero comics. It manages to be both inevitably overrated and impossible to overrate, like the Beatles or Citizen Kane. But it’s not exactly a barrel of laughs. It’s kind of a barrel of tears and razors and Rubik’s Cubes. It’s Citizen Kane, but it’s also Xanadu, all shadows and puzzles and bad vibes. It’s Easy Rider in the sense that it demonstrated that a youthsploitation medium could produce art that punched its weight alongside anything else, but it’s also Easy Rider in the sense that it has a super-buzzkill ending and is kind of nailed to its historical moment (which is why Snyder’s insistence on keeping all the Nixon/Reagan stuff felt so nonsensical in 2007.) And it’s fun, in spite of all that, but a lot of the fun is complicated fun, rarefied fun, specialist fun. Academic fun, too — all those symbols, symmetries, callbacks, ironic juxtapositions, and citations from Nietzsche/Blake/Shelley/Jung gave geeks accustomed to subjecting far less ambitious works to scholarly close-reading a chance to use that intellectual toolbox on something actually designed to reward it.

It’s still a book about aging superheroes choking on their own curdled dreams, a book that indicts the idea of the superhero and finds it guilty of being an outmoded Cold War power/security fantasy that is possibly, y’know, for pervs. It actually makes that case pretty convincingly, with fire and eloquence. But there was always something blinkered and quixotic and weird — and maybe even subconsciously self-loathing — about the way superhero-comics fans insisted, for years, on making this dark, rape-y, openly conflicted book their ambassador to the wider world. And you could argue that it was the wider world that made that decision — there, in 2005, on Time Magazine’s index of the 100 best English-language novels since 1923, sat Watchmen, right between Under the Volcano and White Noise on a list that included no other graphic fiction — and cape-comics fans just went along with it, just happy to be invited to the party at all. Either way, though: Watchmen became the superhero comic most often shoved in the faces of nonbelievers as the pinnacle of the form, and I can’t help but think that over the years it probably did as much to dissuade potential comics readers (women, for example, or people who just can’t get excited about superheroes but might dig spies or vampires or gangsters or talking animals) from investigating the form any further. Besides: I’m philosophically opposed to any medium having a Great Work that squats imperiously atop its canon, assuring people that if they’ve read one they’ve read ‘em all. (The only other book that comes close to that emblematic status is Art Spiegelman’s Maus, but that one emerged from a tradition that parted ways with the superhero mainstream long before Watchmen came out—and anyway, it’s also, y’know, pretty dark.)

The conversation around the Watchmen movie didn’t generate much honest reassessment of the book’s reputation — HOLLYWOOD IN BLOWING IT YET AGAIN NON-SHOCKER was just too easy a headline, and Snyder (suspiciously bro-like, despite his art-school background) too tempting a sacrificial goat. But maybe the Star Wars example is instructive here. When George Lucas went back and took a digital Beadazzler to Episodes IV through VI, only purists complained. But when the prequels came out, they prompted a lot of people who’d grown up keeping holy the Trilogy, refusing to see it with anything except an 8-year-old’s eyes, to go back and take a long hard look at Star Wars in general, and to think about why they’d defended these deeply-flawed movies for so long, and about whether letting go of the whole saga and leaving it to modern-day 8-year-olds instead of clinging to an entirely illusory sense of ownership might not be such a bad idea. Because only George Lucas owns Star Wars. Only DC Comics owns Watchmen. Corporations are not people. Loving something doesn’t mean it belongs to you. And if there’s a chance that a bunch of bad (or, to sound a hopeful note, merely gratuitous) brand-extensions can teach that lesson, then bring on Li’l Rorschach.