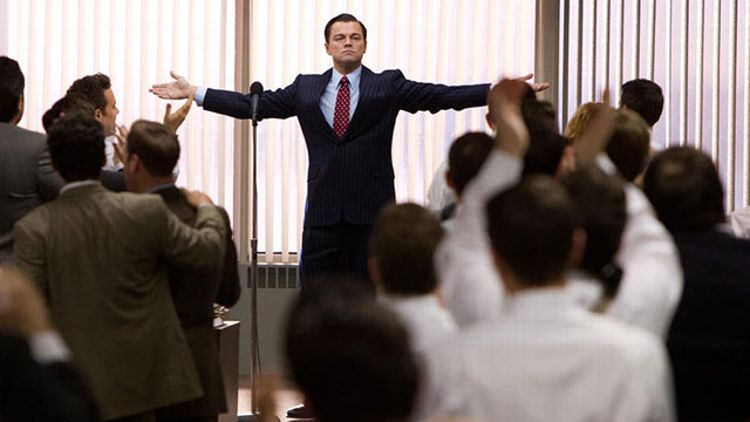 Martin Scorsese’s The Wolf of Wall Street will be the longest film of the 71-year-old auteur’s career and of the 2013 holiday season, clocking in one minute shy of three hours. If running times don’t count as scandalous, though, here’s what might: Scorsese flew to Marrakesh, Morocco, last week to judge a nine-day film festival immediately after handing his final cut to Paramount. The New York Times speaks of two “sneak-peek guild screenings” that happened over the weekend, then calls Wolf the potential “weirdest” Oscar movie of the year. Oh, that’s right: Premiering on Christmas means Scorsese and Leonardo DiCaprio are in the Oscar race together again for the first time since The Departed won four statues in 2007, including Best Picture and Best Director.

The Times goes on to preheat a little Scorsese vs. Scorsese competition, asking if Wolf, about “scammers scamming scammers,” can “do for crooked stock traders what Mr. Scorsese’s Goodfellas did for the mob.” What about all the reasons Wolf is rated R — “strong sexual content, graphic nudity, drug use and language throughout, and for some violence.” Drugs and Jonah Hill swearing inventively … in every single scene. Just last week, The Hollywood Reporter noted that certain sexytime scenes were snipped to duck an NC-17 rating. And nonetheless, “might [Wolf] find Paramount executives on the next plane to Morocco, looking for a filmmaker who dropped a problem in their laps?” That one sounds overly dramatic, Mr. Times — but Paramount is in last place among the major studios in 2013, standing at $823 million at the domestic box office. Warner Bros., in first place, has earned twice that.

“There were no formal research screenings, according to a person who was briefed on the proceedings and spoke on the condition of anonymity because of confidentiality strictures,” the Times adds to the pile. We’ll see if that mattered soon enough. Lastly, we’ve got to worry about whether film writers get to screen this one before the holidays, and how Leo and Marty will do against the zillion other big releases coming for Christmas. Place your bets. (Mine: Wolf slaughters The Secret Life of Walter Mitty, 47 Ronin, Grudge Match, and Inside Llewyn Davis; Wolf contends closely with American Hustle and Saving Mr. Banks; Wolf dies at the hands of The Hobbit: The Desolation of Smaug, Ron Burgundy, and maybe Walking With Dinosaurs.)

Afternoon Links: Lindsay Lohan Is Ready for Her Share of the GTA V Money Now