The Week in Gossip: The Five Stages of Accepting Renée Zellweger’s Face 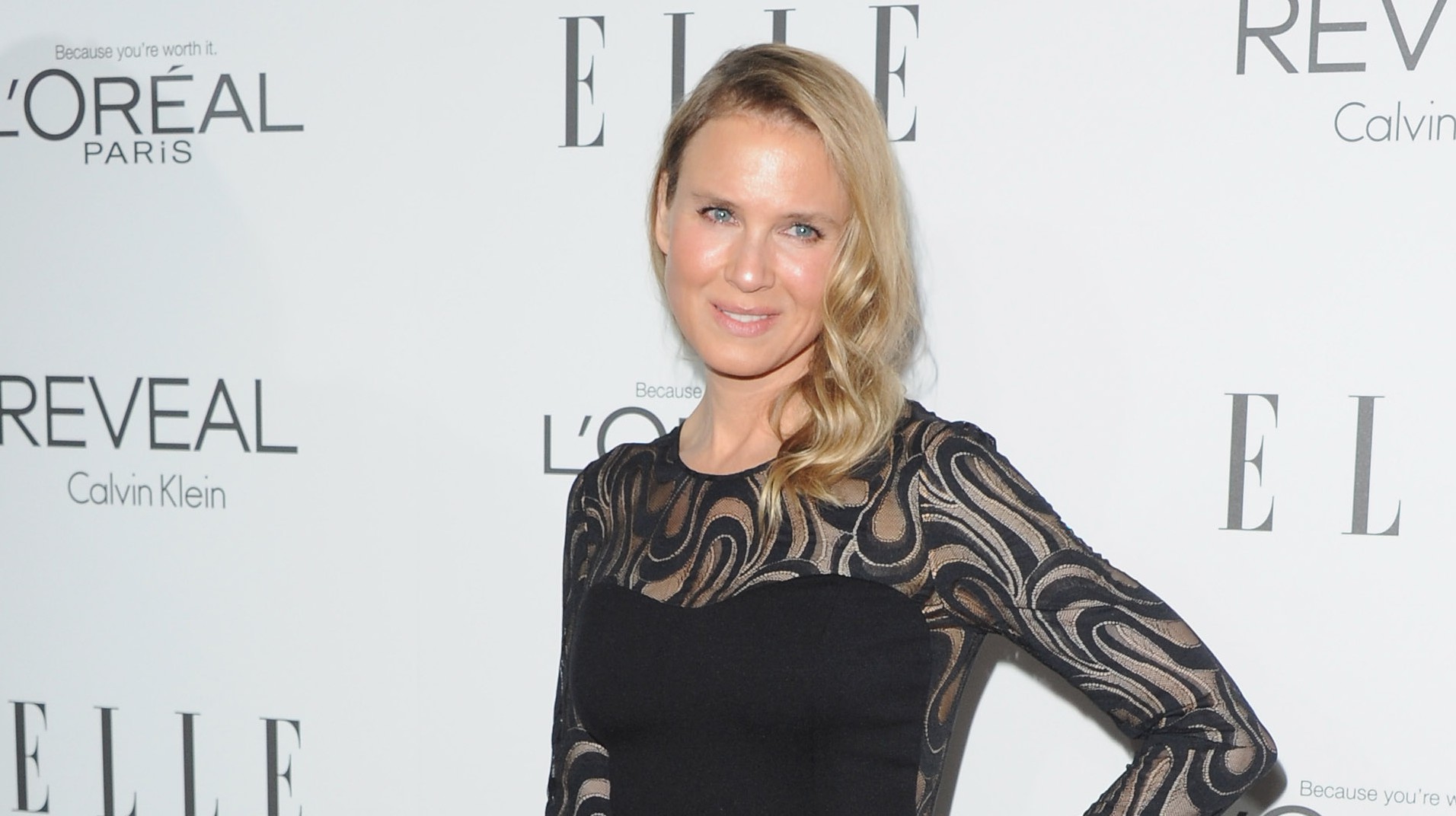 On Monday, Renée Zellweger attended the 21st Annual Elle Women in Hollywood Awards. She did not look like the woman who was had at hello or the woman on a sugar high or the woman who kept a diary or even the woman in jail. She looked like an entirely new woman.

I think we, the Internet, have covered the five stages of grief regarding Renée’s new face. I’m assuming the first stage, denial, occurred on site when someone working at the event didn’t recognize Zellweger as she made her way down the red carpet. “Wait, who is that?” someone must have asked.

Next, anger surfaced as a two-headed monster. There were the bloggers and critics and commenters whose shock manifested as ridicule or acerbic commentary about how unrecognizable this public figure is now. In turn, that commentary was met with an outcry from another faction, Group 2, who felt Group 1 failed to acknowledge the larger context in which this obvious plastic surgery should be considered.

Twitter functioned as the platform for bargaining, or rather, negotiating — as Group 1 and Group 2 subtweeted, at-replied, and argued to to keep their points alive and their voices heard.

Depression is supposed to be Stage 4, but in this case, some people skipped straight to it: people like me. I’m not quite sure what my stance is on plastic surgery. If you dislike your face and you’re rich, shouldn’t you be able to change it? Should Hollywood and society encourage women (and men, for that matter) to embrace the anatomy with which they were born? I think the answer is yes to both of these questions. But the inundation of opinion, some of which was delivered with the Internet equivalent of shrieking, has left me confused. Whose side do we want to be on?

Ultimately, I’d like to be on Renée Zellweger’s side. She shut everyone up with this response:

I’m glad folks think I look different! I’m living a different, happy, more fulfilling life, and I’m thrilled that perhaps it shows. It seems the folks who come digging around for some nefarious truth which doesn’t exist won’t get off my porch until I answer the door. My friends say that I look peaceful. I am healthy. For a long time I wasn’t doing such a good job with that. I took on a schedule that is not realistically sustainable and didn’t allow for taking care of myself. Rather than stopping to recalibrate, I kept running until I was depleted and made bad choices about how to conceal the exhaustion. I was aware of the chaos and finally chose different things.

Zellweger has led us triumphantly into Stage 5: acceptance. She sounds a little kooky, yet she may be the calmest voice we’ve heard from. Even if you remain undecided on your precise plastic surgery stance, supporting happiness doesn’t seem so bad. She also revealed that she is dating guitarist Doyle Bramhall, who is well known among people who know about music. Crazy Days and Nights is suggesting that she may have some deep-seated stage fright issues that have derailed her career, but perhaps the new face is the first step toward reclaiming her A-list status. Though, if this week’s uproar is any indication, everyone still knows her name. Let’s say a fond farewell to her old face and move forward with the new.

Have you been wondering what’s going on with the youngest of Robert Kardashian’s daughters? The weekly tabloids have been satiating interested parties, leading me to believe that the pre–Kourtney & Khloe Take the Hamptons hype machine is in overdrive. In Touch contributed to the “Who is Khloe’s real father?” canon by offering a new candidate: Lionel Richie. He has since refuted this, and so the Kardashian publicity train rolls on. They deliver this week’s story line via Us Weekly, returning to a well as dry as the state of California. Us reports that Khloe remains legally wed to her estranged husband and alleged substance abuser Lamar Odom because she can’t locate him. Well, has she tried Google? I can’t accept this story until I know how much effort Khloe and her team have put into the matter.

If you know anything about Ariana Grande, you either: (a) are a loyal Grantland reader who has followed her fight with Jennette McCurdy, (b) have a child who watched Sam and Cat, or (c) are vaguely aware of the diminutive pop singer of ever-increasing ill repute. Whispers about her diva behavior have grown louder in recent weeks, compounded by the fact that her brother appeared on the latest Big Brother, where he was not well liked.

But a story surfaced this week that may show a different side of the maligned singer. She’s a follower of Kabbalah, the mystic offshoot of Judaism made famous by followers like Madonna and Ashton Kutcher. Grande was raised Catholic, but turned away from the church because of its stance on gays and SpongeBob: “‘[The church] said Spongebob Squarepants is gay and he’s a sinner and he should burn in hell. And Harry Potter was a sin. And working women. I was like ‘Enough! First the gays, then Spongebob and now Harry Potter? Get out my house!’” The specific teachings she has referenced are as such: “You have to watch your intentions, make sure you’re not giving in to your ego. You have to numb your reactive state. You have the power to change your reality.” Perhaps she’s not spending enough time on Kabbalah since her ego has, reportedly, overtaken her id.

Bar Fight of the Week: Blake Griffin in Vegas

What high highs and low lows for NBA player Blake Griffin this week. Adult Swim and Brand Jordan announced a new sketch comedy marketing campaign starring Griffin with his teammate Chris Paul. Blake has already proven in his Kia commercials and at the ESPYS that he’s got that comedic timing. I’m sure it’ll be amusing, at least. But glory was short for him as TMZ reported that Griffin was under investigation by the Las Vegas police for alleged assault. He, allegedly, got into a fight at Tao nightclub in the Venetian with a stranger after said stranger tried to take a picture of Blake. Things got Biebery when Blake allegedly tried to grab the phone. Blake’s coach Doc Rivers is standing by him, though: “I trust Blake 100%. He’s a great kid. We’ll figure it out and get through it.” The Clippers have seen bigger problems.

This is a surprising one. Following a summer of controversy in which he was accused of sexual assault, X-Men director Bryan Singer is expecting a child! The mother is actress Michelle Clunie, and she is not a surrogate: She’ll be listed on the child’s birth certificate. Singer is planning to buy a house for her on his street in West Hollywood so they can co-parent together. Apparently Clunie and Singer have been best friends for 25 years, and always intended on embarking on this arrangement together. Congratulations to them. Dreams come true, especially for super-rich and famous people.

Inheritor of the Week: Melissa Rivers

Well, it turns out that Joan River was rich. Very, very rich. Her daughter Melissa will inherit $75 million in cash, plus Joan’s $35 million New York apartment. Melissa’s son has his own heretofore undisclosed inheritance. It’s possible that Melissa could see another cash infusion, because she may sue the facility where Joan’s surgery went awry as a means to find out exactly what happened. Melissa declined the autopsy, and now may file a lawsuit to force doctors and other staff members to testify.

My Trip to Fox’s ‘Utopia,’ Just Another Struggling California Commune