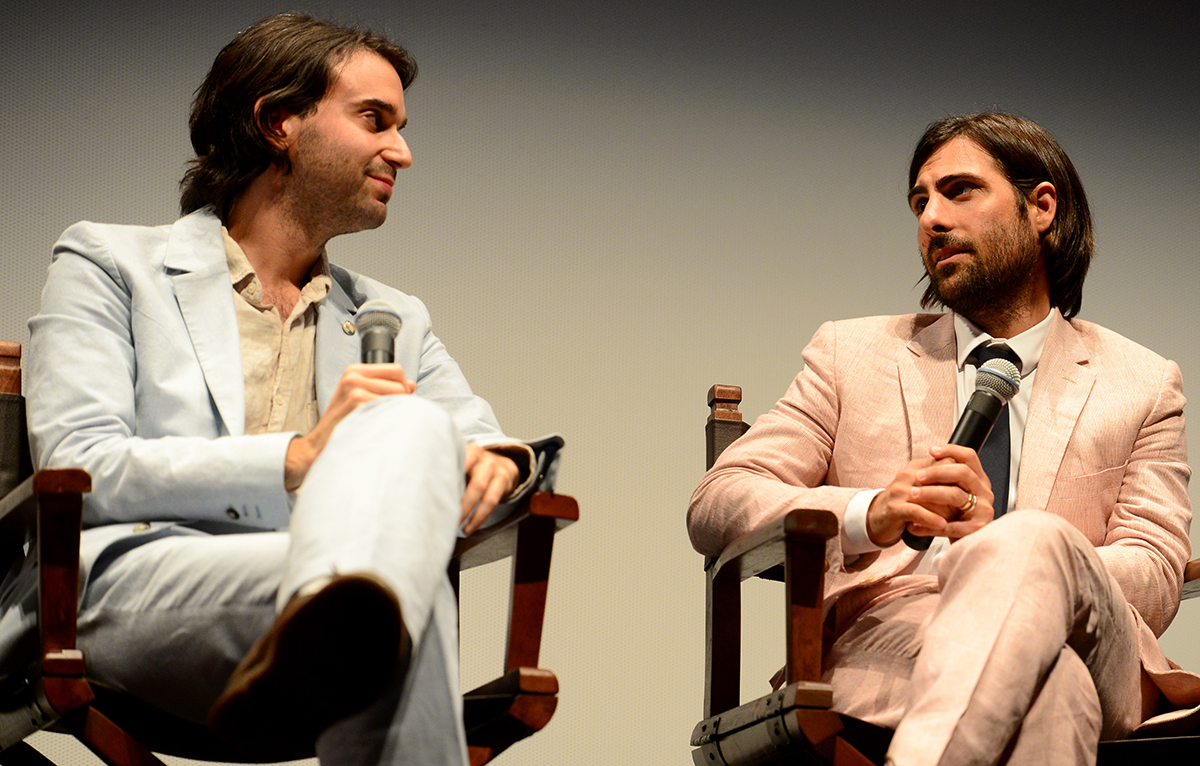 Alex Ross Perry’s latest film, Listen Up Philip, opens with the titular character, played by Jason Schwartzman, settling scores with former friends and ex-lovers he believes have wronged him. It’s like the baptism sequence at the end of The Godfather, only with less blood and more self-destructive spite. It is not easy to watch: Around the time Philip denounces his disabled ex-roommate (who in turn calls Philip an “insufferable piece of shit”), my flight instinct kicked in hard.1 Could I really spend another 100 minutes with this SOB?

Fortunately, I had previous experience with Perry films and knew this would pass. A similar feeling came over me at the start of 2011’s brother-sister road-trip saga The Color Wheel, which I wound up loving. In both films, the director sets you up to expect a movie you’ve already seen many times and dread seeing again. Then he proceeds to deftly maneuver around those expectations and toward an unexpectedly emotional destination.

With its loathsome lead, archly literary voice-over narration, and brownstone-heavy NYC setting, Listen Up Philip appears at first to be yet another novelistic character study about a self-involved man — in this case, a writer who grows close to another, older, self-involved writer, Ike Zimmerman (Jonathan Pryce), to the chagrin of a long-suffering girlfriend, Ashley (Elisabeth Moss). I assumed I was watching Greenberg meets Wonder Boys set in Woody Allen’s nostalgic version of the Big Apple. Then Perry changes course: Philip disappears for a stretch, and suddenly Listen Up Philip becomes a movie about Ashley decompressing from a bad relationship. Then Perry changes course again to zero in on the crumbling relationship between Pryce’s Philip Roth–like literary lion and his daughter, Melanie (Krysten Ritter). When Philip comes back into focus, he is part of an ecosystem of characters who are in the process of pulling away from one another.

“In most of these movies, when a character becomes successful and then they move on from their relationship, that’s the end of that. What I’ve never seen is what happened to that girlfriend,” Perry said when reached by phone last week. “Most movies only present characters as functionaries of a central protagonist, and what I wanted to try to do was play around with that, just to keep myself entertained and not make a movie I’ve seen before.” 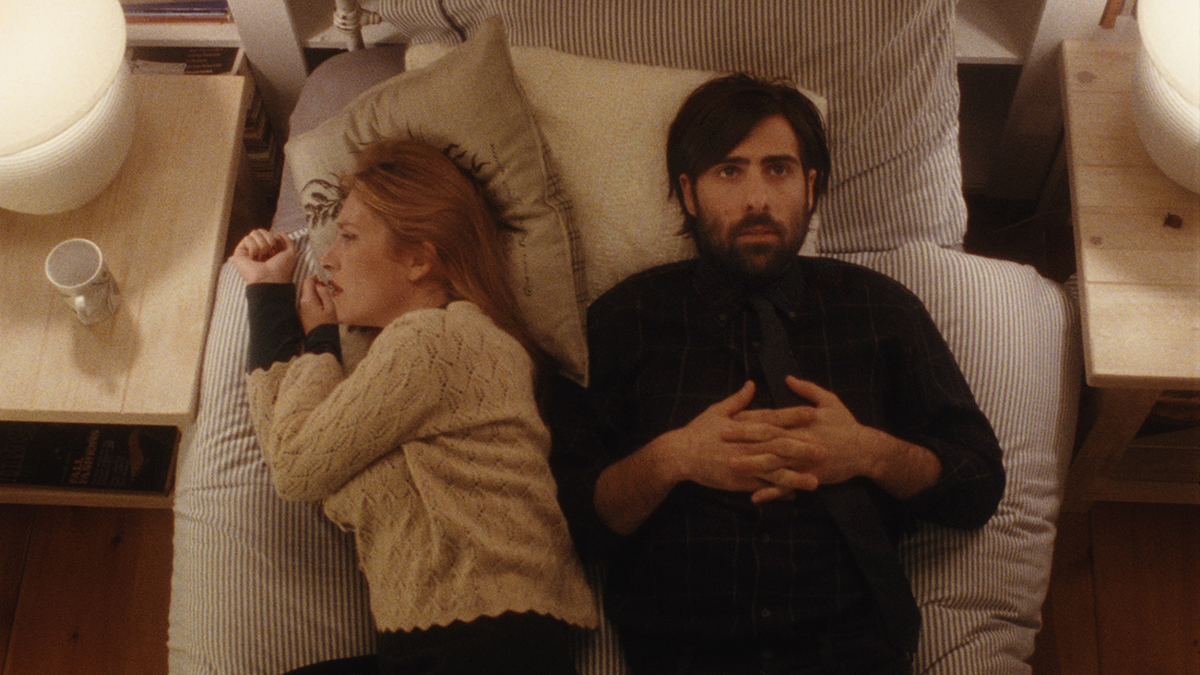 Perry sees a lot of movies — he estimates about 200 in theaters per year, plus hundreds more at home. Perry also makes a lot of movies: He’s just turned 30, and he already has three features to his name, plus a TV project he finished for HBO in 2013 that the network opted not to air, and a new film called Queen of Earth, starring Moss and Inherent Vice’s Katherine Waterston, which he shot last month and was at work editing when he stopped to chat.

If you want to annoy Perry, call him a “cinephile.” It makes him reflexively bristle. While he did attend film school at NYU, he credits working in a video store for two years as the true foundation of his education in the craft.

“It’s simple: Working in a video store with a bunch of eccentric film nerds who I really connected with taught me to like what you like,” he said. “You go to the video store, and all of a sudden, there’s no difference between the highbrow art cinema and the scummiest, grind-house exploitation films. If it’s good and you like it, and you can explain why you like it, then it’s a great movie. Working there taught me to be confident saying things like, ‘Sylvester Stallone is an incredible filmmaker.’ You could never say that in the halls of NYU.”

In spite of his budding reputation as the new avatar of indie New York cinema — he shoots talky comedic dramas in 16mm, inviting easy comparisons to John Cassavetes and Noah Baumbach — Perry is a populist at heart. Movies for him, he says, are first and foremost about entertainment, not edification. (“I never say a movie is ‘fascinating,’” he insisted.) The presumption that it is often otherwise, for other directors, might strike some as a straw-man argument. But for Perry, his conviction has been a guiding philosophy as he’s moved closer to the mainstream. Just as The Color Wheel represented a quantum leap past his no-budget 2009 directorial debut, Impolex, in terms of its reception and reach, Listen Up Philip has by far garnered the most extensive and enthusiastic coverage of Perry’s career, which bodes well for the film finding an audience as it opens outside of New York in various cities on Friday and in the coming weeks. (It’s also currently available on VOD.) 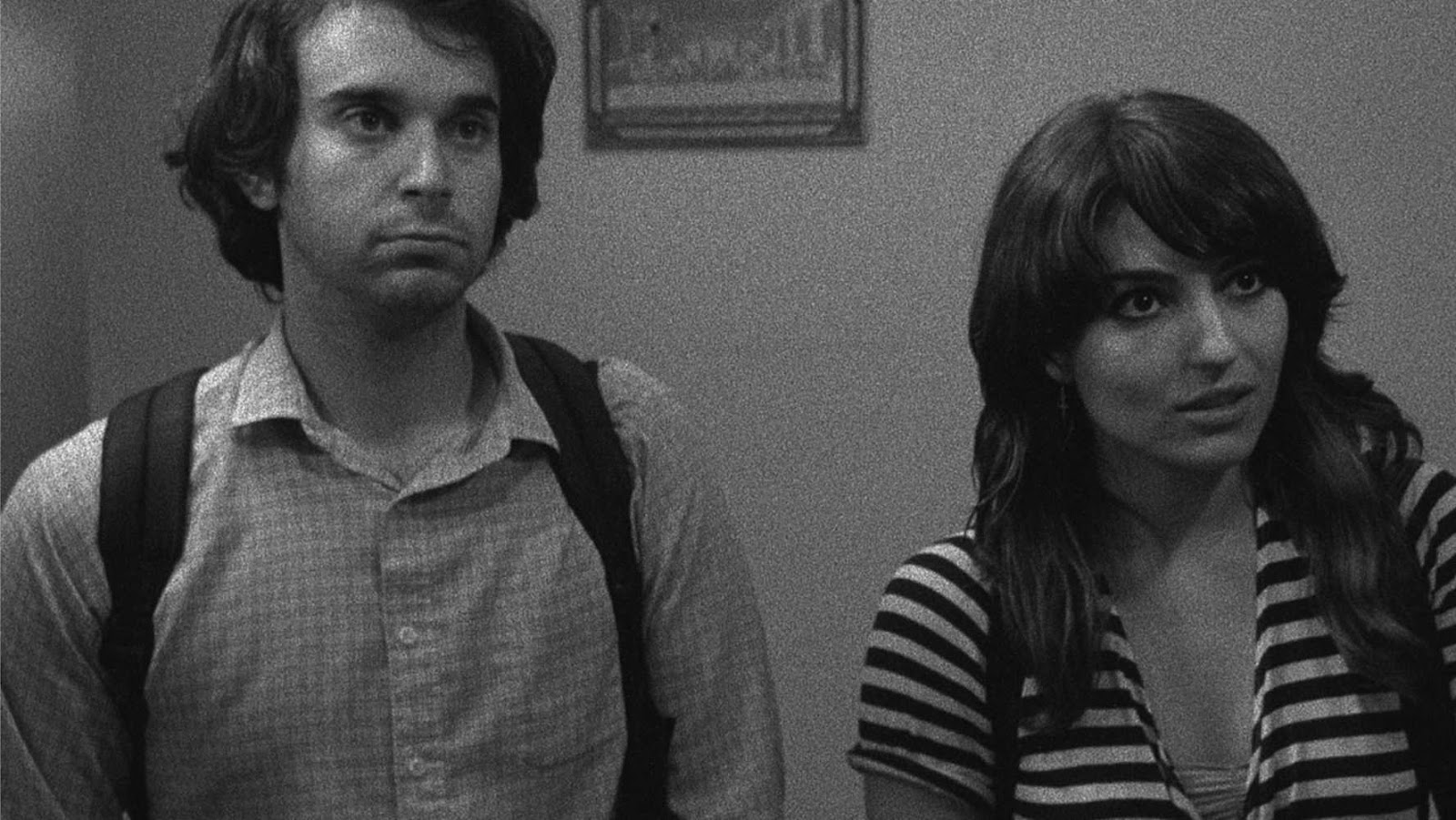 “Jason Schwartzman walking around being insulting and saying hilarious quips is a mainstream sensibility. It’s so mainstream that they made a whole TV show for three years with him doing that sort of thing. I love that sensibility,” Perry said. “If I had played that role, he would be a completely irredeemable monster, which is why I never considered doing that.”

Perry was alluding to The Color Wheel, which he costarred in with the film’s cowriter, Carlen Altman, affecting a nasally, petulant grumble that contrasted with Altman’s insulting brassiness. It would be an overstatement to call Perry a monster in that movie, but he’s definitely grating. Perry is at his most hateable in his first scene, when he’s trying to cajole his girlfriend into having sex by referencing his “massive black-man-sized erection.” Altman shows up not long after, delivering her lines between massive eye rolls. At that point you expect The Color Wheel to unfold like an indie-rock redux of Clerks. (As a comedy duo, Perry and Altman look uncannily like a mumblecore Fiery Furnaces.) In reality, Perry is like Kevin Smith if Smith were more into Ingmar Bergman than George Lucas. As The Color Wheel develops, Perry slowly erases the comedy to reveal pitch-black psychological dysfunction — this handiwork is imperceptible until the film’s final moments, when the troubling subtext to Perry and Altman’s relationship is finally laid bare.

I was curious to see how Impolex, an unconventional World War II picture, related to his other films. Perry describes Impolex as a “fever dream” inspired by reading Gravity’s Rainbow, which prompted him to quit his job and “make a film inspired by what that novel made me feel.” If Listen Up Philip is a spiritual Roth adaptation, Impolex is similarly indebted to Thomas Pynchon.2

Impolex played fitfully in select New York art houses two years after it was finished, and streamed for a free on a website run by a friend of Perry’s for just one week earlier this year. Otherwise, it is currently unavailable on DVD or anywhere online legally. Perry seemed perversely amused by this, in a way that struck me as oddly familiar.

“I’m pretty impressed with myself that that movie is five years old and I’ve never really had a single opportunity to put it out anywhere,” he said. “Five years ago, everybody was passing it over, and talking about and writing about other films. If those films were not available today, not a single person would be saying, ‘Man, I really want to track that down.’ But they were all given a chance, and that movie wasn’t, so for now, the only access people have is through torrent sites. You can track it down.”

At that point, I quickly realized who Perry reminded me of: Philip, particularly the scene in Listen Up Philip3 in which he shoots down a photographer’s assistant who rejected him when he was unknown, only to demonstrate romantic interest now that the author has become semi-famous. “I’m not a groupie or anything,” she says. “If you were,” he replies, “you likely would have read both my books.”

“Everyone is wrong in assuming that the only possible correlation there can be between [me] and a character would be the character that is the closest to my own age and the one with whom I share a gender,” he countered when I suggested the comparison. “There’s an equal part of me in Ashley, who works and puts up with all the things you have to do in order to do what you want. There’s no more of me in any one character. I just let the sides [of myself] that I was struggling with at the time that the film was being written play out against each other. It was a way to figure out some things.” 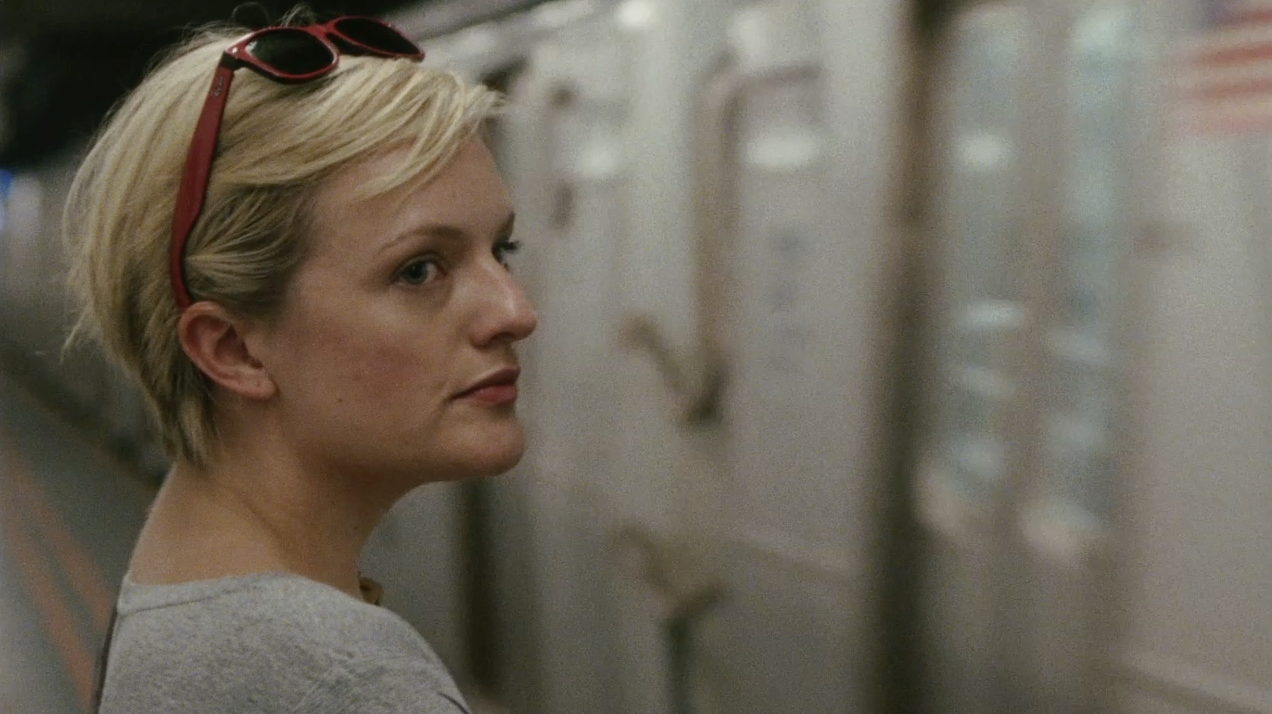 But still: Even if Perry isn’t Philip, he sure does talk like Philip. When I asked if Queen of Earth was a thriller — it’s been described as such online — Perry instantly reverted to the deadpan sardonicism that’s become a hallmark of his movies.

Perry can’t bring himself to joke about The Traditions, the scuttled cable TV series made up of seven 15-minute mini episodes that Perry made for HBO in 2013. He said his inspiration was Richard Yates, though the setup also echoes Gone Girl: “It was a small story about a married couple that moves to the Midwest when the husband gets a job that requires him to relocate,” Perry said. “It focused largely on the difficulties of this couple’s adjustment to the early days of their marriage, and trying to adjust to the husband meeting new people at work, and the wife never getting to meet anybody.”

Mere “hours” after Perry turned in The Traditions, “somebody looked at a spreadsheet of the quarterly budget and said, ‘Hey, maybe we shouldn’t do these little tiny projects right now, and then that was that,’” he said. “I’ve made four things if you count that, and only two of them are even remotely available. I think that’s a pretty incredible ratio in this day and age.”

Perhaps Perry’s problem, as his critics allege, is that his characters aren’t likable enough, which for some weird reason reflects poorly on Perry in some sectors. (“Alex Ross Perry is not an asshole,” reads one recent headline.) Perry, unsurprisingly, rejects this thesis. He’s not changing tracks on his next movie, anyway.

The Week in Gossip: The Five Stages of Accepting Renée Zellweger’s Face