The Week in Gossip: Every Dubious Rumor That Could Possibly Explain the Solange-Jay Z Elevator Fight 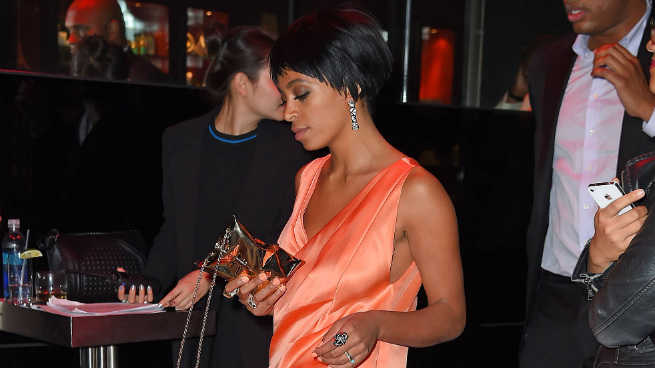 If you are a conscious member of society, you likely already know that Shawn “Jay Z” Carter and Solange “Beyoncé’s sister” Knowles got into an altercation on the evening of May 6. TMZ obtained footage of Solange attacking Jay Z in an elevator at the Standard in New York following the Metropolitan Museum of Art’s annual fashion gala. In the grainy tape, you can clearly see Solange hit her brother-in-law until a bodyguard holds her back. Then, she kicks at him while her arms are restrained, and all the while Beyoncé looks on, stirring to pick up the end of her dress, but otherwise unmoved. This video has rocked the entire Internet, if not the entire world, uncorking a torrent of subsequent reports.

It’s been just three days since the video surfaced, but there are enough ancillary stories to last weeks. First: the provenance of the video. Business Insider reports that TMZ paid $250,000 for the footage, which a currently unknown Standard employee recorded from security monitors on his or her cell phone. (However, a TMZ rep calls that story “hilariously inaccurate.”) Next: What is Solange so mad about? This is where speculation takes over. The Daily News says it began when Jay snapped at Solange because her civilian friends used his name to get into the Standard Party. Us marks an alleged confrontation with designer Rachel Roy as the beginning of Solange’s belligerence. Most media reports seem to agree that the confrontation escalated in the elevator because Jay planned to attend Rihanna’s after-party instead of going home with his wife. With so few people in the elevator, any information about the words exchanged is second-hand at best. But, of course, this has revived whispers about Jay Z’s rumored affairs.

The most frequently referenced potential mistresses are Rihanna and Rita Ora. Rita Ora is a singer better known for previous relationships with Calvin Harris and Rob Kardashian than her music, though “How We Do” is rather catchy. The rumors about a supposed affair with Jay are not new, in part because she is signed to his Roc Nation record label. When asked if they ever had a thing in a recent radio interview in the U.K., she replied, “Don’t you dare disrespect Beyoncé like that.” Ora’s response deftly encompasses two conversation-ending tropes that we all must abide: (1) It’s wrong to have an affair with a married man, and (2) never question the supremacy of Beyoncé, a sovereign with a kingdom so large it has no boundaries.

The Jay Z and Rihanna rumors have deeper roots. Ever since she signed with Def Jam in the previous decade, she has been linked to the record label’s elder statesman (though he has since moved over to Roc Nation). Their relationship has had highs (“Umbrella,” “Run This Town”) and lows (Jay does not approve of any dalliances with Chris Brown), and it took a curious turn just the day before the elevator incident. On May 5, Rihanna signed with Roc Nation. The label already managed Rihanna, but now she is signed there, too. Complex makes a good point: Where were the press releases announcing this major celebrity news? It’s suspicious. Rihanna has moved one step closer to Jay, professionally, and if there is any force that could check the hegemony of Queen Bey, it’s Ri. The younger is as ubiquitous, but while Beyoncé’s persona is all about perfection, Rihanna has flourished by embracing a raw and unfinished vibe. They share a reticence to engage with the press, allowing social media and their musical choices to do the talking.

Beyoncé’s reaction over the past few days has manifested mostly through her Instagram account. On Tuesday she posted a cryptic Bible verse about choosing friends wisely. She took that down, though a screenshot is up on Gawker. Yesterday she posted several photos with her sister, looking impossibly happy in all of them. Solange also took to her Instagram account — to delete all recent photos with her big sister. Beyoncé has spent the last few years cultivating an image that is primarily messaged through staged photos and videos shared via Instagram, Tumblr, and an HBO documentary over which she had complete creative control. So it’s hardly surprising that she’d retreat to these forums for damage control.

While Beyoncé and Jay Z have made no formal announcement (and I doubt they will; formal statements are not their style), a Solange-is-crazy narrative is coalescing. An anonymous source told Us that “Solange has flipped her lid like that before.” This implies that Beyoncé didn’t react because the behavior wasn’t shocking or unexpected. Another “source” tells “Page Six” that Solange was “crazy drunk and out of it,” which is the much more straightforward and obvious explanation. No further elaboration needed! Yet “Page Six” also says that Solange has been struggling emotionally since she was dropped from Roc Nation.

The Cracks in the Foundation

The most shocking aspect of the elevator footage is how it shatters the carefully created images of Jay Z and Beyoncé that they work tirelessly to maintain. The video is testament to the fact that they may not be the pacific, content couple they pretend to be every time they sit courtside at a Brooklyn Nets game. These facts are revelatory only if you’ve happily bought what they’ve been pushing for years. But the evidence has been lurking for a while.

Blind Gossip posted an item last year suggesting that Beyoncé, too, has a temper. The couple allegedly had a blowout fight backstage at the 2013 Super Bowl, during which Michelle Williams and Kelly Rowland did not flinch. From there, the rumors about the couple only get darker. Back in September, the death of their former bodyguard Norman Oosterbroek prompted Enty from Crazy Days and Nights to expound on the termination of the bodyguard’s employment with the Carter-Knowles family. You can read about it there. Yikes.

Perhaps the strangest rumor about Beyoncé is that, though she made a big show of announcing her pregnancy, she actually used a surrogate to carry Blue Ivy. The rumor was born from her appearance on an Australian chat show in which it appears her pregnant belly folds in on itself. It’s difficult to find video of it, but Wendy Williams offers a great breakdown here.

Again, these rumors are only salacious because the duo, and Beyoncé in particular, go to great lengths to cover up their true selves. And now, unfortunately for them, more reports of recent discord are surfacing in the wake of Monday’s scandal. Apparently they had an awkward, tense dinner last weekend, though that’s not particularly strange. The most compelling story to suggest a less-than-happy marriage is that photos of the two at Nets-Heat Game 3 reveal that Beyoncé removed her “IV” finger tattoo. The number symbolized their wedding date and their birthdays, and it was on her left ring finger.

After so many successful years of positive messaging, this video footage hardly seems like the incident that will bring down an empire — especially since Solange already seems to be sacrificed to the media. But if they ever divorce or if they ever lose control of the royal couple narrative, this may be the turning point.

New Couple of the Week: Olivia Munn and Aaron Rodgers

So these two are dating now. Unless she’s planning to move to Wisconsin, or Chicago, even, I don’t see this one lasting.

Get a grip, Alec Baldwin. He was stopped by the NYPD for riding his bike against traffic, and then blew up at the cops. Perhaps he and Solange can seek anger counseling together.

Happy Ending of the Week: Rodney Stuckey and His Bachelor Bride

Rodney Stuckey of the Detroit Pistons and Cassandra Ferguson of Juan Pablo’s Bachelor season are engaged. The two have a son together. To quote her Instagram, “Who wants that perfect love story anyway?” That’s an inspirational beginning to their marriage.

Sad Attention Grab of the Week: Pele’s Love for One Direction

One Direction, milking their final months of international relevancy, are in the middle of a global stadium tour. On a recent tour stop in São Paulo, Brazil, Pele recorded a brief video message to the band that played on the big screen during their show. According to the Mirror, “He’s an enthusiastic amateur musician and excited about the prospect of playing guitar with Niall [the blond Irishman who will be haunted by the voluminous number of photos of him wearing braces].” Can’t Pele aim a little higher? What about, say, Keith Richards? Just a suggestion.

George Clooney Update of the Week: Engagement Celebration in Malibu

Amal Alamuddin spent Mother’s Day with her husband-to-be and friends at Café Habana in Malibu, California. They drank tequila and wine, and that restaurant has this semi-noteworthy corn on the cob. They probably ate that.

Straight to Video: Will 'Godzilla' Live Up to the Hype?

The Squirrel and the Fox: Jesse Eisenberg and the Cult of the Powerfully Nerdy Movie Star