The Walking Dead, Season 3 Finale: A Shoot-out, a Sad Good-bye, and a Gubernatorial Rampage 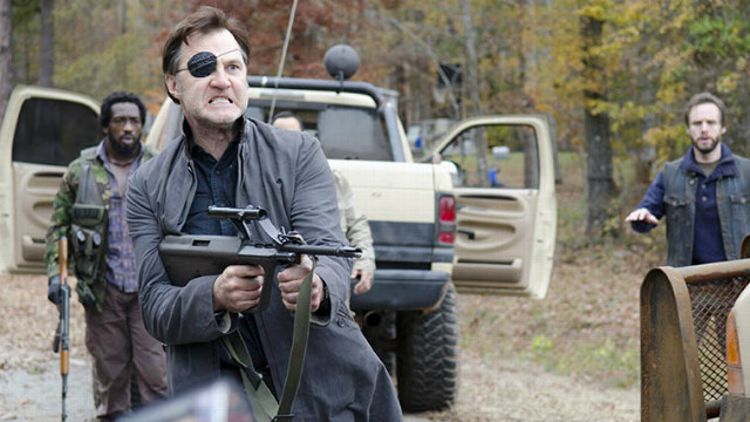 What, you really thought I was gone? Hasn’t this interminable show taught you anything? People, please! It’s Walking Dead 101: Even if someone has died of boredom, a second kill-shot is always necessary. So come on. Time to lock and load.

I last wrote about The Walking Dead seven weeks ago, when the show returned as it often does from its midwinter hiatus: thrashing and stumbling, making a lot of noise but very little sense. Since then, I’ve never once regretted my decision to turn my back on rural Georgia. Sure, reality has its problems, but now that bath salts have given way to molly, at least face-eating isn’t among them. I enjoy living in a world ruled by logic, not country-fried gospel handed down from the prophets John and George. I prefer being surrounded by clean people and mud-streaked Hyundais, not the other way around.

So, what to say now that I’ve been tossed back among the biters? I could approach this final turn at the podium like the Governor’s troops at the prison, unloading a macho fusillade of bullets and bluster at an empty target. After all: There were so many things in “Welcome to the Catacombs” deserving of our spleen, if not poor Milton’s lacerated liver. The hour, written by departing showrunner Glen Mazzara and directed by the show’s most effective shooter, Ernest Dickerson, opened with yet another oddly on-the-nose callback to Lost: a close-up of the Governor’s one remaining eyeball. Unfortunately, everything I saw after that only reminded me of that far superior show’s worst tendencies: the ham-handed way it would occasionally cram character beats into tonally inappropriate action scenes, the endlessly reductive subdividing of characters into “our” people vs. “their” people, the season-long hyping of theoretically awesome conflicts that fizzled away in practice.

The inevitable war between Woodbury and the prison was, in the end, a washout. The Governor’s goons arrived like lions, wasting ammo and snarling, only to turn tail like lambs when confronted with things that go bang in the dark. I suppose Glenn and Maggie could blame the bulky body armor for their sudden inability to shoot straight, but I think the fault lies with a writing staff still weirdly worried about the murky morality of its heroes. That the lovebirds missed every one of their targets allowed them to keep their hands clean (if not their hair) and provided the Governor an even sillier set piece for his full-blown case of VD. That’s Villain Disease, by the way — Andrea may wear naughty, apocalypse-inappropriate underwear, but I’d never accuse her of hiding anything other than a wrench down there — and the Governor’s got it bad. It’s the sort of thing that can have you beat up your best friend, sentence your ex to die in an overly elaborate setup (if he wanted Andrea dead, why not just kill her? While it got the desired result eventually, leaving her alone with Milton was like attaching a laser to a freaking shark), and mow down your trigger-shy followers just for giving you some well-deserved side-eye. It can also have you drive off into the woods for some “me time” with your bros rather than reclaim the secure town you’ve spent months defending, thus allowing your enemies to waltz in with fewer people than are required to play a game of bridge. Rest in peace, Andrea, but your final life lesson didn’t even resonate: The safety was off on this entire episode, but the whole thing misfired anyway.

To be honest, pulling apart the stringy corpse of this DOA finale isn’t nearly as interesting to me as dissecting the season as a whole. The Shield veteran Glen Mazzara arrived last fall like Michonne, a hooded savior who kept the chatter to a minimum and the beheadings high. Even after the stalling and speechifying of the past few weeks, there’s still no way Season 3 wasn’t a massive improvement on the farm-bound horse puckey Frank Darabont served us a year ago. The decisions Mazzara made early on seemed to make sense creatively; his was a more ruthless zombie show, one that went about its brutal business with box-ticking rigor and occasionally even flashed a sick self-awareness. The cornpone Hershel wasn’t working? Let’s reinvent him as a one-legged, ponytail-rocking Obi Wan. (This isn’t snark; Scott Wilson’s fevered sincerity this season has made him one of my favorite survivors.) Darabont’s devotion to a brittle, bitter take on Lori Grimes made her more loathed by the audience than the plague that ended the world? Fine, Mazzara seemed to say. Let’s give them what they think they want from the platelet-rich comforts of their couch, really force them to consider the horror of a woman having one baby cut out of her while another puts a bullet in her brain.

Behind the scenes, the shifting of the show into a more vicious vision of Lost was also reasonable. Mazzara, used to writing antagonists with brains in their heads, not in their mouths, used the comic’s crazed Governor as a necessary counterweight to the endless stream of shuffling, decomposing extras. Traditional drama needs conflict, and it can’t just be man vs. nature (or nurture, or whatever it was that caused the zombies; I guess I don’t care because The Walking Dead certainly doesn’t seem to). It’s why Bruce Willis has to face William Fichtner’s pistol in Armageddon, not just an uncharismatic asteroid. There’s something undeniably intriguing about a world in which the living are more fearsome than the reanimated dead; drawing bright lines between the different types of survivors could help firm up a set of characters that had grown uncomfortably mushy in isolation.

But as Milton learned last night, the optimism of lab experiments is all too often dashed by cruel reality. (Props to Dallas Roberts, by the way, for giving his all to such a zero. Between this and Rubicon, Roberts has proved to be an expert at using his sad intensity to elevate material unworthy of his talents.) Mazzara’s best-laid plans were undermined by several missteps, most notably the poor design and worse depiction of his chosen foil, the Governor. Again, I understand why he decided to take us through the downward arc of Woodbury’s savior, morphing him from Philip, the humble aquarium collector, to a buddy-stabbing, blood-spattered monster. But The Walking Dead, as currently constructed, just isn’t built to support the nuances of such a drastic, slow-building transformation. (It’s much better at having people slump over dead, then pop back up moments later, grasping and growling.) And it certainly wasn’t helped by the wackadoodle posturings of David Morrissey, who, in lieu of any real emotion to play, clearly decided instead to chew through the scenery as if it were Merle’s fingers.

Mazzara was able to pull off a few minor miracles: Carl is no longer dead weight, though his new habit of looking at things (photos, sheriff’s badges, the ground) is only a marginal improvement over everybody always having to look for him. Daryl remains the heart and emo hair of the show, and though Tyreese and his sister (?) add little in the way of personality, it’s nice to see that even survivalist militias in the deep South can be fully integrated eventually. In “Clear,” Mazzara — and future showrunner Scott Gimple — even provided the closest thing The Walking Dead will ever give us to a bottle episode, at least until Hershel falls back off the wagon. It was also the unquestioned high-water mark of the series to date, proof not only that good actors can improve nearly anything (how much better would the show be if the group were built around Lennie James’s wounded, ferocious Morgan instead of Andrew Lincoln’s raspy, wooden Rick?), but that there remain a raft of fascinatingly creepy little stories to tell about this ruined world. It was a glimpse of what The Walking Dead could have been on a more demanding network or in surer hands — an emotionally rich emergency room, not a puffed-up shooting gallery.

I have no knowledge of what really went on with this latest executive decapitation — for those counting, it’ll be three showrunners in four years, not usually the sign of a healthy show — but I have to think what ultimately undid Glen Mazarra’s reign at the top of The Walking Dead was The Walking Dead itself. From conception to execution — and up to and including last night’s multiple executions — the series has always been a cleverly designed cul-de-sac, its dead ends camouflaged by violence, makeup, and reams of entertainingly grody dead people. No matter who’s in charge, the show demonstrates no curiosity about how one world ended or how another might begin. It was bold for AMC to green-light a series that brags about its lack of hope, but also creatively suicidal. (It was also, I am compelled to say, wildly profitable. It’s a credit to all involved that the one thing The Walking Dead does right — kill zombies — is the one thing 10 million people are dying to watch on a weekly basis.) Unlike the end of Season 2, Mazzara didn’t leave much for his successor to work with: Not only did we end where we began, but the team is now burdened with an entire cell block full of the weak, elderly, and infirm. There’s no obvious place for them to go but, then again, that’s sort of the central conceit of The Walking Dead in the first place.

For a moment, I thought it strange that Rick didn’t lead his people to Woodbury at the end of what even devotees have to acknowledge was a frustrating final hour. (Not even the overdue death of Andrea gave me any satisfaction. Her foot-fetish fumbling with the pliers was just one more mistake in an annoying lifetime full of them.) After all, it’s a perfectly nice town with running water, secure borders, and a pre-installed Thunderdome for any late-night cage-fighting needs. But then I realized Mazzara’s final decision may have been the most poetic — and confessional — of all. There could be no better metaphor for the stunted success of The Walking Dead than the sight of Rick frog-marching everyone — heroes, anonymous extras, and audience included — right back into the safe confines of a prison.