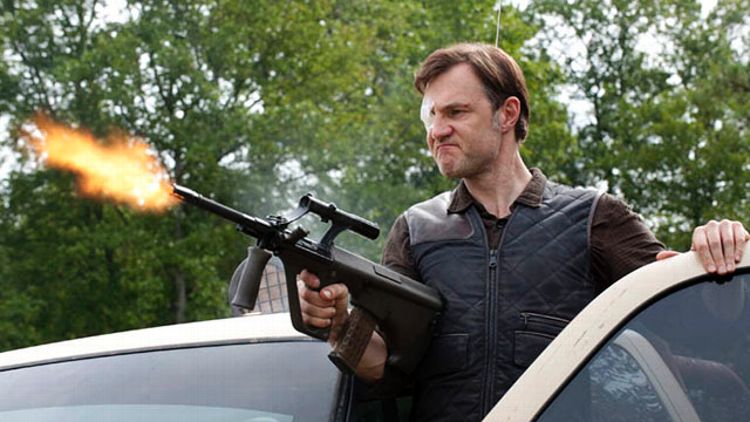 Last week, Grantland contributor and longtime The Walking Dead recapper Andy Greenwald finally lopped off the head of his tenure as Senior Zombie Correspondent in order to better focus his energies on television shows with “plot development” and “three-dimensional characters.” While we wholeheartedly support Andy’s decision, we here at the Hollywood Prospectus decided we could not let a single skull crunch go undocumented, and will be featuring a rotating series of recappers to chronicle the rest of this season of The Walking Dead. First up: David Jacoby.

Take your brain out. To appreciate the televised zombie apocalypse, you must first make a zombie of yourself. You can’t be like Andy Greenwald; you can’t think about story development, character, continuity, performances, showrunners, sets, logic … you can’t think at all. This show isn’t about thought, this show is about bullet holes in zombie faces, samurai swords in zombie skulls, gore, violence, and general badassery. Last night’s The Walking Dead was not unlike last night’s All-Star Game; there was no discernible strategy at play, there were long lulls between short bursts of captivating action, and there was no soul — but both televised events were thoroughly entertaining. Let’s recap this shit.

You see, the zombie apocalypse is stressful. You have to kill your best friend, your son has to kill your wife, and on top of all that, you aren’t eating well. The latter should not be overlooked. So when we start the episode with Rick chasing down his dead wife’s ghost, we are supposed to read it as, “Oh, look at Rick, he’s gone all crazy,” but I see it more as, “Rick really needs a sandwich and a nap.” Besides, of course he is chasing her down, she looks good. In The Walking Dead, when you die and turn into a zombie your skin turns gray and rots and you lose all equilibrium and foot speed. In The Walking Dead, when you die and turn into a ghost, you lose 10 pounds, you get a perfectly tailored silk dress, and your skin glows like Beyoncé’s. But while Rick is out by the gully getting handsy with his dead wife, the rest of the crew is at a staff meeting getting all, “We need to protect ourselves against the Governor, who is coming to kill us.” Oh yeah, the Governor is totally coming to kill them.

The Governor is up in his little Woodbury apartment not killing any zombies but clearly plotting to kill the Prison People. He also rolls up on his boy Milton, the brains of the Woodbury operation, and interrupts Milton’s meditative chillwave jam session to reaffirm Milton’s commitment to the Woodbury crew and notify Milton that he is about to roll out on the prison. Were I the Governor, I would use a different management technique. Isn’t Milton supposed to be working on a cure for this zombie plague? I would definitely be a little less “R U still down?” and a little more “Sorry to bother your meditation break, but the entire human species is depending on you here, Milty; when I come in this room I want you mixing chemicals and writing shit I don’t understand on a chalkboard. I don’t want you listening to cassingles on your boombox, comprende?” But maybe that’s just me. When Andrea goes looking for Gov Dukes later, she is informed that he is “on a run.” Nice. We know that he is headed to the prison, which means there is going to be a battle scene, which means there is going to be some good ol’ The Walking Dead gore, which means this is going to be a good episode. Only problem is that we haven’t seen any zombie kills yet. Enter Merle and Daryl.

Merle and Daryl are out on a nature walk. It’s unclear exactly where they are coming from, or going to, when they hear a baby crying. After tracking the sound, they find a Latino family under attack by a zombie pack. Daryl, ever the softie, breaks out the crossbow and pitches in. Merle, reluctant and racist, finally succumbs and pitches in with a few bullets to zombie brains. The highlight comes when Daryl drags a zombie from the front seat of a hatchback to the trunk and closes the door on its head. The resulting blood splatter, sound design, and brain goop was so perfect that the editor decided to stay on the shot of the decapitated dead zombie at least 20 frames longer than was intended. THIS IS WHY THIS SHOW IS GREAT. Other shows on TV will have better performances, better story, better-looking people, better everything, but The Walking Dead is FAR AND AWAY THE BEST SHOW ON TV FOR WATCHING PEOPLE’S BRAINS GET SQUISHED INTO CAR DOORS. It’s not even close. As this scene comes to a close, you are left satisfied, your zombie bloodlust briefly quelled. You think to yourself, maybe this will end up being one of those episodes that only has one zombie kill scene, but that brain explosion was so good I don’t even mind. But if you think that to yourself, you’re wrong. As the great poet Redman said, time for action.

There is nothing better than a mid-sentence bullet to the face. Just as dude-who-they-found-in-the-prison-whose-name-I-don’t-know was saying, “And I remember this one time … ” he takes a bullet to the forehead. It was perfect. It only took a millisecond to recognize that Gov Dukes was out there with a couple cronies and a lot of automatic weapons looking to wipe out the Prison People. What ensued was a remarkable display of near-misses and nonchalant use of heavy artillery. Rick did the T.J. Hooker dive-and-roll-for-cover thing, Herschel somehow used a few reeds of grass as cover against machine gun fire, and the Governor, well … his gunfight technique was legendary. Not only did Gov Dukes refuse to use the pickup truck THAT WAS RIGHT NEXT TO HIM as cover, he took at least four steps away from it just because he is a G. Use two hands while firing a machine gun? Why bother? Aim? That’s for sissies. After a solid two or three minutes of bullets putting holes in everything around every participant in this firefight but none in the actual participants of the firefight, the whole thing ended the same way that a pickup football game on your block ends: a car came. Instead of, you know, staying and killing the people he came to kill, the Gov and his cronies called it a day and rolled back to Woodbury like their mother called them inside for dinner. It made no sense, but I barely noticed because my brain was in a fish tank on the mantle.