‘The Walking Dead’ Recap: There’s No ‘I’ in Team, But There’s an ‘Us’ in Terminus 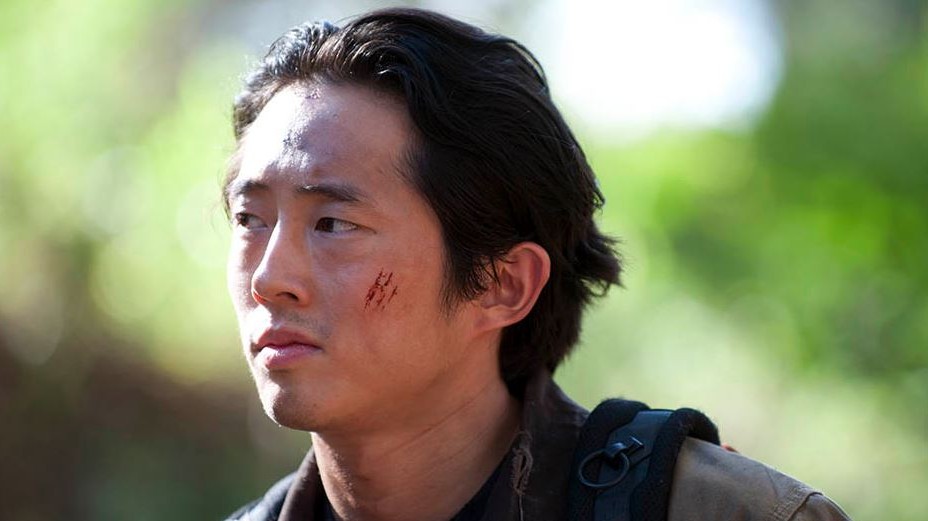 If you’re still showering off the moral sludge of last week’s Walking Dead — wherein survivalist schoolmarm Carol Old Yeller’ed her tween psychopath protégé Lizzie — this week’s episode felt like a comparative romp through Mister Rogers’ postapocalyptic neighborhood. The show ramped down to its more typical saunter, taking a breather before the inevitable nihilist bloodbath of the finale. Sure, someone got an arrow through the eye and there was a Great Wall of Walkers, but tonight, even the Anonymous Evil goons felt more like rambunctious rapscallions than humanity-drained marauders. It was as if TWD wanted to caress our shivering pysches after the double dose of child-icide in “The Grove.” Not only did we finally reach Terminus’s gentrified gates, we got some dollops of happiness as everyone stopped to smell the roses (or steal the strawberries in Daryl’s case). More importantly, this week asked the best question to be raised in The Walking Dead universe:

Diplodocus, duh. Eugene set the innocent schoolyard vibe early on as he geeked out with (and drooled over) lovely Tara while Sergeant Abraham and Rosita followed Glenn on his unwavering search for Maggie. Even if Tara didn’t bat for the other team, Eugene’s zombie dinosaurs/gamer banter wasn’t going to win her over anytime soon. Luckily, Glenn came across Maggie’s bloody street art, which told him to go to Terminus, and he had the whole group double-time it down the tracks. When Sergeant Abraham tried to slow him down for a breather, Glenn even forked over his beloved riot gear to Eugene so they’d all keep going till sundown, a deal almost as lopsided as the Dutch buying Manhattan for $24. But Glenn was hell-bent on reuniting with Maggie this episode — and so, apparently, was the writing staff.

Of course, an obligatory obstacle had to occur first, and it took the form of a dark, scary tunnel echoing with the gurgles of hungry walkers. Sergeant Abraham peaced-out at that, taking Rosita and Eugene with him while Glenn dragged Tara headlong to certain death because the zombie gore wasn’t even dry on Maggie’s latest love note. After an odd exchange in which Tara shakily justified her motivation for sticking with Glenn despite his Ahab-like intensity — sorry, but it was a little hard to buy her saying that Hershel’s death hit harder than her sister and niece’s — the pair came across the aforementioned Wall of Walkers buried by a partial cave-in, behind which were, you guessed it, even more Walkers! Undaunted, Glenn rigged up a nifty shadow puppet show to distract the zombies while they slipped by, but Tara got herself caught in some rubble, and Glenn, realizing he’d been a bit of a dick leading Tara to her doom in pursuit of his beloved, stuck by her side. Fortunately, by sheer force of obnoxiousness, Eugene had Rosita and Sergeant Abraham drive around to the other side of the tunnel in a minivan they’d scavenged, where they ran into Bob, Sasha, and Maggie, all of whom came rifles ablazin’ to the rescue. Thus, we got our long-awaited reunion, and even my stone-cold blogger heart softened as Maggie and Glenn embraced — although I still don’t understand why Maggie would force Glenn to burn his only photo of her.

Crazy, right? Blink and you’d miss it, but in tonight’s brief scene with Rick, Carl, and Michonne, Andy actually got to grin when Michonne lost a bet with Carl over who could balance on a rail track longest.  Of course, the real B-story was Daryl’s slow seduction by Joe and his gang of Anonymous Evil henchmen. Apparently, the key to surviving the apocalypse is to adopt playground ethics: Daryl learned that what kept Joe and his gang together was that they essentially abided by the ironclad law of “Dibs!” Of course, for that to really sink in, Daryl had to go toe-to-toe with the gang’s preexisting arrow aficionado, Len, who picked a fight over a rabbit that he and Daryl shot simultaneously. Joe resolved the fight Solomon-style by splitting the rabbit in half, but Len was determined to dick over Daryl. He tried to frame Daryl by planting his half of the rabbit in Daryl’s bag, but Joe saw through the lame ploy and had his erstwhile associate beaten to death — all the while coming across as the abusive paternal presence that’s been missing in Daryl’s life since Merle’s death. Daryl ate it up and started calling shotgun, too, as Joe led him on toward Terminus, explaining they were after a low-down guttersnipe who’d zombified their friend back at an abandoned house — i.e., Rick.

What could possibly be wrong with Terminus?

Maggie, Glenn, et al. made it to the finish line first, and Terminus turned out to be a cross between a loft-conversion and a community garden with a den mother named Mary who offered everyone short ribs. You don’t have to be a mullet-sporting Einstein to sniff something funky in the air, and Mary’s massive charcoal grill all but screams cannibalism. You don’t leave the front gate open in the zombie apocalypse unless random machine gun–toting strangers have more to fear from you than you do them. Considering how sunny tonight’s episode was, I’m tempted to bring back the Deathwatch for the finale. Robert Kirkman’s all but used an Internet bullhorn to let us know something wicked this way comes, and it could well be the end of Rick Grimes. The question is whether it’s death by BBQ or the Anonymous Evil beating of a lifetime.

This week was a little light on zombie kills, though honorable mention goes to the walker who flossed with barbed wire. But best walker kill actually goes to a walker: the dive-bomber who almost took out Eugene only to splatter itself on the ground like a blood-filled water balloon. Sometimes it’s those little pleasures that make you feel like a dinosaur-loving 12-year-old all over again.