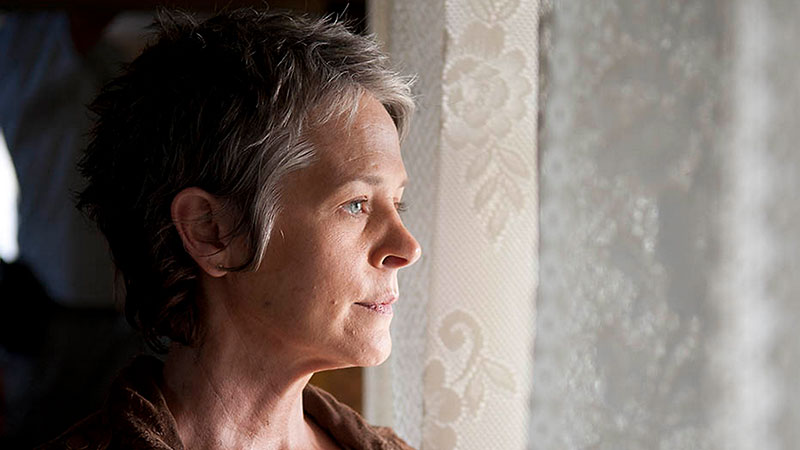 The Walking Dead is actually a lot like a zombie. It’s a half-rotted, ravenous shell driven solely by its insatiable appetite for flesh/ratings. Sometimes it lumbers so awkwardly that you’re tempted to run in lazy circles as it chases you around the yard/search for new and exciting GIFs as the latest plot-light hour unfolds on your TV. But let your guard down at the wrong moment, and the show will sink its teeth into you. While it might not compare to recent jaw-dropper episodes like Breaking Bad’s “Ozymandias” or Game of Thrones’ “The Rains of Castamere,” “The Grove” had me shouting plenty of disbelieving expletives at my flat-screen. At the very least, The Walking Dead set a new record for going from boring to bat-shit in the fewest episodes possible.

But like all the show’s most egregiously moonwalking victims, I should have seen it coming. Carol’s back, and whenever she’s around, it rains crazy. Preemptive human barbecues, kindergarten cutlery classes, you name it: Carol definitely knows how to stir the pot. Sunday, though, someone else was driving the whack-job bus: Carol’s star pupil and rising rabbit-corpse abstract expressionist Lizzie. It turns out Lizzie’s crazy-eyed impulse to choke baby Judith a few weeks ago was just the tip of the iceberg. This week, Lizzie finally went full Borden and swan-dove right off the deep end, which leads to our first question:

Does John Steinbeck Deserve a “Story by” Credit?

Given the Travels With Charley quote shoehorned into Hershel’s apogee episode earlier this fall, we already know showrunner Scott Gimple loves him some Steinbeck. Frankly, AMC should cut the Minstrel of Monterey a royalty check: Tonight’s episode was pretty much Of Mice and Men and Zombies. Only, even Steinbeck didn’t dare to break commercial screenwriting’s unspoken cardinal rule, let alone break it twice in cringe-inducing succession: The Walking Dead didn’t kill just one kid tonight, it killed two. Twitter promptly anointed “Lizzie, honey, look at the flowers” this week’s first new meme. 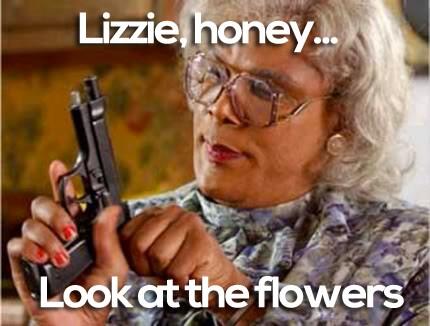 After a two-week detour past Daryl and Beth’s budding barely-legal romance, on Sunday the show turned back to Tyreese, Carol, Lizzie, Mika, and baby Judith making their way to Terminus. As the group sauntered down the tracks, though, Lizzie’s bizarre affinity for the walkers became progressively more problematic, even as she solidified her status as Carol’s substitute daughter. First, Lizzie interrupted Tyreese’s hammer-time fun after he’d spied a walker heading their way. (Carol was off giving Mika one of her patented “You’re weak” pep talks.) Next, Carol caught Lizzie playing ring-around-the-rosy with a walker on the lawn of the bucolic pecan farmhouse where the group had decided to rest; when Carol sank her knife into the dizzy zombie’s skull, Lizzie screamed like Carol had just dropped her puppy off at the pound. Finally, Lizzie confirmed what we’d all suspected — that she was the anonymous zombie feeder from the first half of the season — by sneaking out to bring the pet walker she’d spared from the wrath of Tyreese’s hammer some tasty, live rat McNuggets.

Considering the horrors unleashed by the zombie apocalypse, these peccadilloes seemed like a child’s regressive response to a world gone mad. Carol was far more concerned about Mika’s proto-veganism/inability to shoot a deer for dinner. But none of that prevented Tyreese and Carol from contemplating a more permanent stay on the pecan farm — though Tyreese’s unabated mourning over his girlfriend Karen’s toasty death would’ve necessitated quite a few awkward silences on Carol’s part. Still, Carol looked like she could stomach it. When the whole gang had to take out a slew of charbroiled walkers passing through the farm (presumably toasted by the symbolic flames of Daryl and Beth’s erstwhile hooch house), it felt like Lizzie was gradually getting over her fantasy that walkers were anything but mindless, flesh-guzzling monsters. Then, we hit WTF territory.

After another conversation during which Carol bit her tongue about frying Tyreese’s OkCupid squeeze, the show delved straight into the dark night of its soul. Everything looked so innocent from afar as Carol and Tyreese returned to the farm: baby Judith playing on a blanket in the grass, Lizzie standing gleefully over Mika’s prone body. Except, Mika was a little bit too still; Lizzie’s smile just five degrees too wide. And, oh yeah, there was a bowie knife in her blood-soaked hand … as she pulled her gun to keep Carol and Tyreese at bay. Lizzie explained with all the lucidity of a serial killer that she’d volunteered her sister (and was about to volunteer baby Judith) for a little foray into flatlining to demonstrate her finer points about the walkers’ ontological status. Lizzie had gutted her sister and floated irretrievably past the dark side of the moon.

The consummate pragmatist, Carol knew what she had to do. After a brief powwow with Tyreese, Carol led a tearful Lizzie out Lennie-style to “look at the flowers” and raised her gun as the show cut to Tyreese’s paralytic face. For a nightcap, Carol finally copped to killing Karen to prevent the Camus-inspired plague from infecting the whole prison, sliding her gun over to Tyreese as she spoke. But instead of going hammer time on a gaggle of zombies, or taking Carol up on the offer to fall on her sword, Tyreese did the most surprising thing of all: He forgave her. 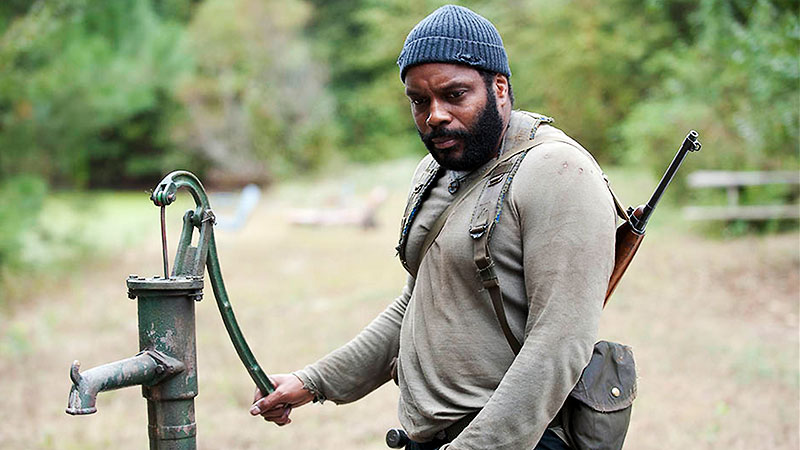 Is Carol the Best Character on the The Walking Dead?

One, Carol actually cares about surviving. Where others speechify and agonize *cough Rick Grimes cough* Carol just does. Yet no matter how many humans she throws on the barbie, Carol’s humanity never quite ashes up. We see the toll she carries for every gruesome act. The show’s and graphic novel’s ostensible theme is the levels to which people will sink when pure survival is the name of the game. Too often, however, the show explores this idea through pseudo-Shakespearean soliloquies. With Carol, the drama and tension comes from watching her will herself to do the unspeakable despite her humanity. That’s much more relatable than someone whining about how it’s a different world, especially because the zombie apocalypse isn’t fundamentally different — we all have to focus on survival; flesh-eating corpses just make it all a little more immediate for those in The Walking Dead universe. Watching a character actively navigate that obstacle course — with some rotting-flesh pyrotechnics here and there — makes for engaging viewing.

Two, Melissa McBride. With its habitual speech-mongering, The Walking Dead can easily get as gamy as stale Spam, but McBride never falters. For my money, the show’s lone undisputed success, from showrunner to showrunner, has been Carol’s elevation from wallpaper cliché to the one character I’ve consistently cared about, even if the survivalist den-mother shtick always makes viewers grin. Hell, it was worth sticking around for The Talking Dead this week to hear McBride speak intelligently about her approach to the episode. She long ago proved she isn’t just another anonymous journeyman actor there to provide corpse bait. Even as the cast has beefed up its roster of acting talent with Wire alums, McBride’s restraint has stood out for the punch she can pack into small gestures and silences.

This episode was McBride’s coup de grace. Carol’s arc reached a conclusion as she was forced to not only talk about the death of her daughter Sophia to Lizzie but also to relive it twofold. McBride played all the beats close to pitch perfect. Others can point out the resonances and layered meanings behind Carol’s tears as she buried Mika and shot Lizzie; all I know is, McBride’s performance kept me engaged. And she sold Carol’s suicidal confession to Tyreese so well that I ignored the nagging thought that a more plausible reaction would have been Tyreese flipping over the table and going ballistic.

It’s hard to say whether one eye-popping episode makes up for all the show’s meandering in the season’s second half. While the low-key road stories disarmed us all for this episode, it’s tough to believe that was intentional. If the next two episodes can hold a candle to “The Grove,” though, at least the show will go out with a bang this year. And again, it’s to McBride’s credit that Carol’s journey made us all forget about when we’d get to Terminus. Love it or hate it, this week’s The Walking Dead was anything but forgettable. Honestly, I have no idea how they’re going to top this other than having Michonne chop Carl up into soylent sushi in a fit of PTSD-Bobo-rage.

Technically, this should be a walker death. And enough roasted walkers got their heads blown off by the gang to fill the corpse quotient. But, despite the ethical vertigo I still feel from watching a grief-stricken mother off her psychopathic pseudo daughter, it’s impossible to talk about anything but Lizzie’s death in this space. And so I’ll leave it there, before my sense of decorum has to hang its head queasily over the toilet of my soul.

Filed Under: TV, TV Recaps, The Walking Dead, AMC, Rick Is The Worst, Zombie Kill of the Week, Ok!, We All Need Therapy, John Lopez