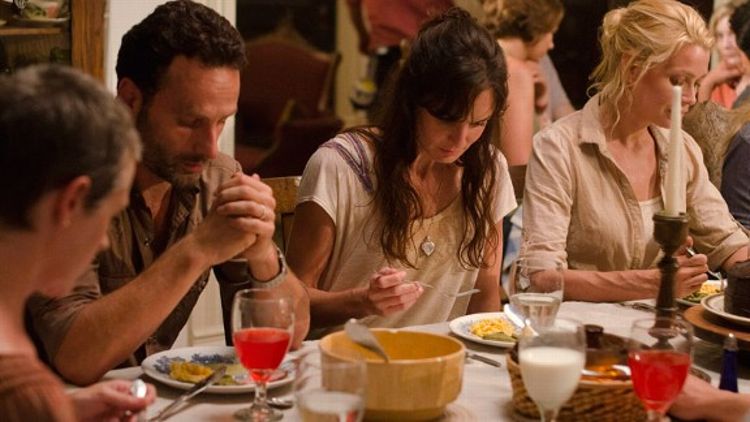 Remember when you had a that substitute teacher in junior high school who had no business in education, clearly just wanted to be in a garage with his over-the-hill folk band, and was all like, “Don’t call me Mr. Stevens. That’s my dad’s name. You guys should call me Drew”? That’s me this week with this The Walking Dead recap. Hollywood Prospectus’ senior Walking Dead correspondent Andy Greenwald is away on non-zombie-related duty. So close your textbooks and tear up the curriculum — there will be no quiz on what is covered today. All I care about on this show are explosions, hot chicks, and creative ways to kill zombies. This week, Walking Dead went three for three on my list, so let’s check in on our favorite zombie killers, one by one. Just don’t tell Mr. Greenwald that we didn’t breakdown the storylines, poke holes in the illogical actions of the characters, or do anything aside from celebrate dead zombies, badass dudes, and post-apocolyptic sexual encounters.

Character’s actual name: Daryl
What I normally call him: Boondock (Actor Norman Reedus was one of the leads in the gunfighttastic film Boondock Saints.)
What he did this episode: It seems like Daryl’s core function is to progressively become more and more badass. At the start of last night’s episode, he was his normal badass, crossbow-wielding, chopper-riding self, and went out to search for the missing little lass of the crew, Sophia. Of course he goes out by himself, because badasses don’t need search partners. Oh wait, going alone isn’t badass enough — he has to ride a horse because that will be more badass. While he’s out there, riding a horse through the forest, saving missing little girls, he shoots a squirrel with his crossbow and tucks the squirrel carcass into his back pocket for later. Never know when you are going to need a snack during the zombie apocalypse. Boondock’s only problem is that his horse isn’t as badass as he is. His horse sees a snake, freaks out, and throws Boondock over a cliff and into a waterfallish thing, which sends him into a river. And now, not only is Boondock horseless and a beat up from the fall, he’s impaled himself on an arrow. The arrow is sticking out of his stomach and through his back like he put one of those kitchy, “arrow through the head” headbands on his torso. It really completed his look, to be honest. Then Boondock got a little sleepy.

Boondock wakes up to see his brother, who was handcuffed to a roof in the first season, leaning over him. It is hard to tell for certain if this is his real brother, his brother’s ghost, or just an arrow-induced hallucination but it is very certain that his brother is a dick. Dude, I am lying here dying. Can you please not do the whole older-brother ball-busting thing? After getting hazed and being instructed to kill Rick by his dick of a ghost brother, he realizes there’s a zombie gnawing at his feet. Finally, a zombie! We are 20 minutes in at this point, Walking Dead. Don’t make me wait this long for a zombie-killing ever again, okay?

Boondock smashes the zombie’s face in with a stick a couple times and then finishes him with the old “stab through the skull and leave the stick there like a flag pole.” He doesn’t even get the chance to appreciate his work before another hungry zombie comes walking toward him. Boondock pulls the arrow out of his torso and shoots the zombie through the skull with it. One would think his badassness would level off after pulling an arrow out of himself and shooting a zombie in the face with it, right? Wrong. He then made a zombie-ear necklace, ate the dead squirrel raw, and walked all the way back to the house to the rest of the cast. Not badass enough yet? Fine — then he got shot in the face and lived. To be fair, he was just grazed by the bullet. But wouldn’t it be cool to be just a little shot in the face? The rest of your life people would say, “How did you get that scar?” And you would tell them, “I was shot in the face. I don’t want to talk about it.” Someone, shoot me in the face right now, please.

How many beers I would like to drink with him: Eight. Initially I wrote two dozen, but I think after seven I would start to get paranoid that he was going to start a fight with a stranger, keep me as a pet, or cut my ears off for his necklace.

Character’s actual name: Rick Grimes
What I normally call him: Rick (one of two characters whose names I actually know)
What he did this episode: Rick is all serious and stuff, which makes him a terrible hang. He spent this episode continuing his reign as the leader of the group that no one elected or asked for. He then organized the search party and was scolded by Hershel the veterinarian. At one point, Rick went with Shane on a walk through the forest looking for Sophia during which we learned that Rick didn’t get any girls in high school. This was not a suprising revelation.
How many beers I would like to drink with him: 0. He’s a square and a cop. Don’t get me wrong, there are cops out there that are great hangs. Rick is not one of them.

Character’s actual name: Lori Grimes
What I normally refer to her as: Wife Chick
What she did this episode: Wife Chick learned she was pregnant during the last episode and we can only assume the child is Shane’s and not her husband’s. At one point this episode, Rick comes back from the woods, where he was with Shane, and says to Wife Chick, “Me and Shane had a long talk.” Wife Chick is terrified that Shane spilled the beans about how the two of them were sleeping together when they thought Rick was dead. Here is some advice for Wife Chick: Walk up to Rick one day and say, “Rick, I have to tell you something: While you were dead and we were in the middle of the zombie apocalypse, I started screwing your best buddy, Shane. Look, I know it’s weird. But you were dead, man. Can we just move past it and focus on not being eaten by zombies?”
How many beers I would like to drink with her: Two. I feel like she cries when she drinks, so two would be just enough to get out before the water works.

Character’s actual name: Hershel
What I normally call him: The Vet (he is a veterinarian)
What he did this episode: Hershel is passive aggressive with Rick about his concern that Rick and the rest of the new folks will ruin his peaceful life on the farm in relative safety from the zombies. If I were Hershel, I would just say, “Hey Rick, since you brought your shot son here, you have lost a little girl, stolen my horse, killed my buddy, Otis, that little nerd is having sex with my hot cowgirl, and now you’ve all just accidently shot someone in the damn face. I think it is time to leave. Like, right now.”
How many beers I would like to drink with him: 0. He … talks … too … slow … I … would … rather … kill … myself.

Character’s actual name: Shane
What I normally call him: Shane (the other one whose name I know)
What he did this episode: Shane’s big thing this episode was trying to convince Rick to end the search for Sophia. Hard to take a “we should stop looking for that little girl we lost during the zombie apocalypse” stance and not seem like a jerk. Shane also told Wife Chick, “All I care about is you and Carl.” To which she responded, “My son and I are not your problem anymore.” Lets hope all of this love-triangle tension will manifest itself in another murderous rampage before this season is over.
How many beers I would like to drink with him: Two. I can’t drink more than two beers with a grown man who tucks his t-shirt into his jeans and wears his high-school football number on a necklace. Sorry, Shane.

Character’s actual name: Maggie
What I normally call her: Hot Cowgirl
What she did this episode: First, Hot Cowgirl declined Glenn’s offer for a sequel to their deserted pharmacy sex romp from last episode, then later sent him a note requesting one after all. Even during the zombie apocalypse, girls continue to send mixed signals.
How many beers I would like to drink with her: 3. Zombie apocalypse or not, it would be hard to explain to my wife having more than three beers with a hot cowgirl.

Character’s actual name: Glenn
What I normally call him: The Asian Dude (maybe not 100 percent politically correct)
What he did this episode: The Asian Dude learned that even when you are literally one of the last men on the planet you still have to put work in to get laid. Oh yeah, he also learned that Hershel is keeping a couple dozen zombies in the barn. I am 100 percent in the Asian Dude’s corner. I root for him to bed the Hot Cowgirl almost as much as I root for zombies to jump out and get gruesomely killed. If he killed a zombie with a sex toy during a nude scene with Hot Cowgirl, I would probably die from a happiness-induced stroke.
How many beers I would like to drink with him: 15. I know you think he is a square, but some squares can be great hangs. He would be really funny, ask a ton of questions, and talk to strangers. Before we knew it, the two of us would be shop-lifting those rolling cheeseburgers from 7-Eleven just for fun.

I love this show. This particular episode certainly could have used more zombie deaths. But Boondock losing his mind, eating squirrels, and making a zombie-ear necklace made up for it. I hope Greenwald comes back next week, because thinking while I watch Walking Dead is not something I ever want to do again. Class dismissed.