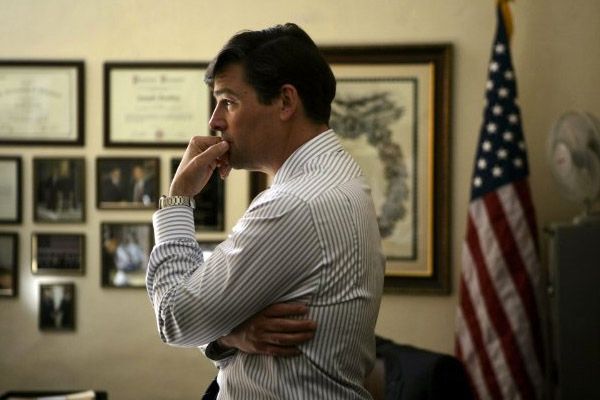 In Round 1, it was John McCain, during a speech on the Senate floor, blasting Zero Dark Thirty for what he said was its tacit support of enhanced interrogation methods. In Round 2, McCain got backup from his senator buddies Dianne Feinstein and Carl Levin, and together the three sent off a strongly worded letter doubling down on McCain’s argument: Enhanced interrogation did not contribute to the capture of Osama bin Laden, but Zero Dark Thirty will convince people it did, and therefore will propagate the continued use of torture. In Round 3, acting CIA director Michael Morell echoed the Big Three’s “boooo enhanced interrogation” stance, in a press release of his own knocking the film for inaccuracies. And now we come to Round 4 and the most ominous-sounding news yet: According to Reuters, the Senate Intelligence Committee “has begun a review of contacts between the makers of the film Zero Dark Thirty and CIA officials.” Uh-oh!

Well, actually, it’s not as serious as the term “Senate committee review” might suggest. All it means right now, according to the Reuters source, is that the committee will review “uncensored copies of CIA records regarding the film. The committee presently does not plan to contact the filmmakers directly.” They will be trying to figure out “whether the spy agency gave the filmmakers ‘inappropriate’ access to secret material … [and] whether CIA personnel are responsible for the portrayal of harsh interrogation practices, and in particular the suggestion that they were effective.” It’s public knowledge that the CIA cooperated with screenwriter Mark Boal and director Kathryn Bigelow. Now all the Senate Intelligence Committee wants to know is if there’s someone at the CIA who can be blamed for giving Boal and Bigelow the bright idea to make enhanced interrogation a crucial element of the film, or if they came up with that one all on their own.

It’s a pretty wild political turnaround for ZDR. Before its release, the big question was whether its portrayal of bin Laden’s capture would boost Obama’s reelection campaign, and whether that’s why the CIA was so quick to disclose information. Eventually, its release was bumped to after the election, and that hullabaloo died down. But now ZDR is being hounded not only by conservatives but also by liberals, shocked that the portrayal of the stirring manhunt ended up bolstering some of the disgraced Bush/Cheney-era interrogation techniques.

Grantland contributor Mark Harris, writing in New York Magazine, explained how the filmmakers ended up getting their access: “Boal … [pressed] his case that, among many newly hatched Bin Laden projects, theirs was the likeliest to reach the finish line. It worked. According to memos released at the request of the conservative group Judicial Watch, the CIA decided to cooperate because ‘Mark and Kathryn’s movie is going to be the first and the biggest. It’s got the most money behind it, and two Oscar winners onboard.’ The CIA recommended extending preferential treatment to Boal, noting that the project had ‘the full knowledge and support of Director Panetta.'”

So the CIA, coming off a huge win, wanted the best and brightest capturing their moment on the big screen. But Zero Dark Thirty ends just with the Abbottabad raid, the “unmitigiatedly awesome” part. It starts shortly after 9/11, focusing on the manifold efforts to find Abu Ahmed, a courier to OBL. And some of those manifold efforts include waterboarding and other gruesome approaches to get information out of detainees — certainly not the CIA’s brightest moments. So now the CIA is all like, Damn, son, how you gon’ play us like that! Or, in the actual words of Morell: “CIA interacted with the filmmakers through our Office of Public Affairs but, as is true with any entertainment project with which we interact, we do not control the final product.” Meanwhile, McCain and his pals are waging this campaign to get their version of the events out there. As they claim in their open letter:

The CIA did not first learn about the existence of the Usama Bin Laden courier from CIA detainees subjected to coercive interrogation techniques. Nor did the CIA discover the courier’s identity from detainees subjected to coercive techniques. No detainee reported on the courier’s full name or specific whereabouts, and no detainee identified the compound in which Usama Bin Laden was hidden.

It’s all up for debate. The movie does open with the words “based on firsthand accounts of actual events,” but that doesn’t mean Boal and Bigelow’s take has to sync with the official government reading. As Harris writes, “[Boal’s] clear that he wanted the film to move past the traditional definition of docudrama that has stretched from All the President’s Men to United 93 and into a genre he calls a ‘hybrid of the filmic and the journalistic’ — a piece of entertainment that doesn’t just re-create a story but advances it.”

And then again, as the McCain/Feinstein/Levin letter put it:

The film … has the potential to shape American public opinion in a disturbing and misleading manner. Recent public opinion polls suggest that a narrow majority of Americans believe that torture can be justified as an effective form of intelligence gathering. This is false. We know that cruel, inhuman, and degrading treatment of prisoners is an unreliable and highly ineffective means of gathering intelligence … You have a social and moral obligation to get the facts right.

It doesn’t seem like this committee investigation is after anything in particular. More likely, it’s just another part of the publicity campaign being spearheaded by McCain to discredit the factual elements of the movie ahead of its wide release (January 11). Boal and Bigelow made the movie they wanted to make, and it’s dark and messy and it does suggest — but does not unequivocally state — that enhanced interrogation led to information about bin Laden. McCain et al. see their place in the conversation as strict anti-torture advocates; the more they can publicly muddle the veracity of Zero Dark Thirty, the more they’re fulfilling their moral and social obligations.

I don’t know who’s right. I do know that I saw the movie last night and it slayed, and then when we were walking out of the very crowded and very dark theater, some dude yelled out “It’s Zero Dark Thirty in here!” and that got some laughs.