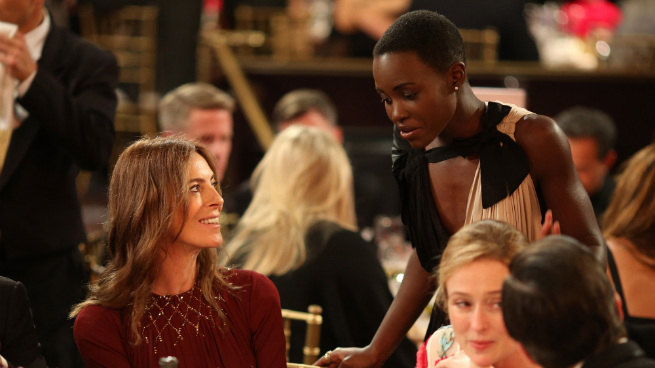 Despite the massive success of Gravity and The Hunger Games, it turns out the number of women with speaking, let alone starring, roles in big films remains depressingly low. Of the top movies of 2013, only 15 percent featured female leads, and women made up only 30 percent of the speaking roles. This is according to a study by Martha M. Lauzen, executive director of the Center for the Study of Women in Television and Film at San Diego State University. That means the numbers for women speaking and starring in film have not budged since 2002, the first year Lauzen conducted the study.

If 15 percent sounds dazzlingly low for our modern times, that’s because it is! And while Sandra Bullock and Jennifer Lawrence may be A-list actors who are able to open movies by themselves, the trickle-down effect for other women to star in big films is basically zilch. As Lauzen bluntly put it: “We think of Hollywood as a very progressive place and a bastion of liberal thought. But when you look at the numbers and the representation of women onscreen, that’s absolutely not the case. The film industry does not like change.” If the numbers for female characters are depressing, the numbers for minority female characters are even more staggeringly bleak: Of those female roles, 73 percent are played by white actors, 14 percent by black actors, 5 percent by Latina actors, and 2 percent by Asian actors. Lupita Nyong’o may have won an Oscar this year, but it remains to be seen whether that will translate into her being offered the kind of big starring and costarring roles her white peers would receive.

Why are there still so few women represented onscreen? Because there are still so few women behind the scenes, and not for lack of trying. Women make up 16 percent of producers, directors, and writers in Hollywood, a number that has remained consistent since 1998. While big movies and tentpole franchises are often doled out to young white male directors after indie successes, female filmmakers rarely receive the same kind of backing or mainstream support. Even many of the films “about” women tend to be directed by men, which makes it all the more depressing when people praise directors like Woody Allen for creating such great female characters. Who knows what kind of female characters we could have if there was more gender parity behind the lens, let alone in front of it?

While successes like Gravity demonstrate that audiences will show up for a great movie, regardless of the lead character’s gender, it can also be convenient for people to point to these exceptional examples as false indicators of progress. The numbers, however, do not lie. Fifteen percent is a ridiculously low figure for a group that makes up more than 50 percent of the human population. Despite self-congratulatory segments in Oscar telecasts, and the occasional mega success of a female ensemble movie like Bridesmaids, the industry seemingly has no interest in changing or becoming more progressive in any way. The conventional wisdom about film viewers is blatantly sexist and racist, assuming that female viewers are interested in seeing male protagonists but not the other way around — that viewers of all races will accept that the majority of narratives and stars must be white. Movies like Gravity, the Fast & the Furious franchise, and Best Man Holiday have demonstrated the flaws in this prehistoric logic, which has remained firmly in place for what feels like eons no matter how many cracks manifest in the ancient ice.

So, what will it take to move the film industry into the 21st century? I wish I knew. Powerful women behind the scenes like Amy Pascal and Lynda Obst have reiterated the importance of building a base of female power and support, but there are still so few powerful women behind the scenes that it can be difficult to get any real momentum going. Lee Daniels and Tyler Perry have demonstrated that the best method of breaking into Hollywood proper can be to go around it by building your own empire, which the powers that be will eventually be forced to acknowledge. But even Oscar wins by female directors like Kathryn Bigelow and black directors like Steve McQueen are a double-edged sword, and allow the industry to camouflage how bad things really are by using the wins as a form of tokenism. When you look at the nominees for Best Director, the majority are white men of a certain age, year after year after year. Even the silent-film era was more progressive about female directors, before the Hollywood system calcified into the heavily imbalanced colossus it is today.

The most important thing is to make sure the numbers are continually brought up and hammered on, so that talking about it eventually leads to measurable, consistent change beyond the handful of women who manage to succeed despite the crushing odds. If there’s one thing I know about women in Hollywood, it’s that we WON’T BE IGNORED.