The Top Eight Reactions From the 2012 Oscar Winners (and Losers) 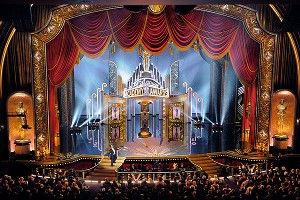 Hey, the Oscars were last night! Assuming that your crippling sense of television FOMO also forced you to sit through the entire telecast, you probably already know that The Artist was the night’s top dog — the little French silent black-and-white flick that could took home Best Picture, Best Director (Michel Hazanavicius), and Best Actor (Jean Dujardin). If you were more focused on, say, appreciating your party host’s painstakingly crafted movie-themed cupcakes than you were on the award for Best Sound Mixing, you can check out the full list of winners over here; you can also circle back with us here at Grantland for the full staff Oscars reaction later today. For now, though, let’s continue the competitive spirit of awards season for just one more morning. So, how did the Oscar nominees do in celebrating triumph or confronting defeat?

8. Meryl Streep’s Best Actress acceptance speech for The Iron Lady kicked off with the titan acknowledging that, 17 nominations in, some people might have gotten sick and tired of her winning everything. Later in the evening, Meryl was kind enough to coin a phrase for this phenomenon: Streep Fatigue. As in: “Frankly, I understand Streep Fatigue, and it shocks me that it didn’t override tonight.” Also: “The whole thing is strange if you’re a human being. If you’re not, it’s probably fine.” And: “I thought I was so old and jaded, but they call your name, and you just go into a, I don’t know, white light. I felt like a kid again. I was a kid the first time [I won an Oscar]. Two of [tonight’s] nominees were not even conceived.” Lastly: “I’m gonna start with a couple [of whiskeys], and then we’ll see if I can walk on those Ferragamos.” Tangentially related: Why don’t more rappers drop ‘Meryl Streep’? She is a universally recognized totem of power and success, and it seems like a lot of words rhyme with both parts of her name.

7. Christopher Plummer, who took down Best Supporting Actor for Beginners, made a callback in his lovely acceptance speech as well, in which he’d thanked his wife for saving him every day. Asked what, exactly, the hell he was talking about, the Plum Man replied, “What do you think it means? I thought it was abundantly clear. … I’ve been a naughty boy, I’ve been bad all my life. … She rescues me every day of my life. What could be clearer?” Like, dude liked to party, OK? But she pulled him out before shit got too real. Anyway, Oscar!

6. OK, so Jennifer Hudson didn’t actually win anything last night, nor was she nominated for anything, but her Twitter reaction to Octavia Spencer’s Best Supporting Actress win for The Help was a humblebrag delight: “”Yes!!!! Welcome to the family Octavia !! Congrats!!! Amazing!!” Unless Diddy resurrected his old ’90s crew “the Family” last night and drafted both Hudson and Spencer into it at the exact same time, I think Jennifer is trying to remind us of something.

5. Officially, Angelina Jolie and her jutted-out right leg won nothing. But, really, they won Twitter. The homage parody account straight crushed the scene last night, with such messages as “Look at this leg!!” “Don’t forget about the leg,” and, my personal favorite, “I’m a leg!!”

4. Some thought Jean Dujardin might have gone a little too Roberto Benigni when he copped Best Actor for The Artist, but this guy is way too psyched on his victory right now to even begin understanding the ramifications of that statement. Clearly, he won’t be thinking straight for a while. As he said last night, “I’m not an American actor, I’m a French actor. I will continue in France. If it’s possible I can make another silent film in America, I’d like to!” A silent film? In America? Oh, Jean Dujardin, you adorable misguided treasure.

3. According to the Hindustan Times, Iran state TV referred to the Iranian director Asghar Farhadi’s Best Foreign Film win for A Separation, which was competing against the Israeli movie Footnote, as a victory over the “Zionist regime.” Luckily, Asghar knew just how to elegantly avoid sparking international conflict. As THR reports, “Later, Farhadi’s English translator did not give a specific answer to the question, ‘Does it mean anything that Iran was nominated alongside Israel?'”

2. While I was watching, I was sure Glenn Close’s face upon hearing she’d lost Best Actress was a screwed-on frozen smile of hate. Running it back — it comes at the 22-second mark below — Close actually looks like she’s approximating something along the lines of genuine human appreciation. Now that’s what I call acting!

1. OK. This is the one. Not up for dispute. After the show, Woody Allen’s Midnight in Paris producer Letty Aronson (who is also his sister) said she was “pretty sure” Woody knew he won for Best Original Screenplay, but that “He was saying that the NBA All-Star Game was on at the same time [as the Oscars] so he might have to turn the channel. But I bet [wife] Soon Yi told him he won.”

The Walking Dead Recap: '18 Miles Out' From Boredom Acres Farms

Eastbound & Dubstep: A Roundup of Kenny Powers Dropping the Bass