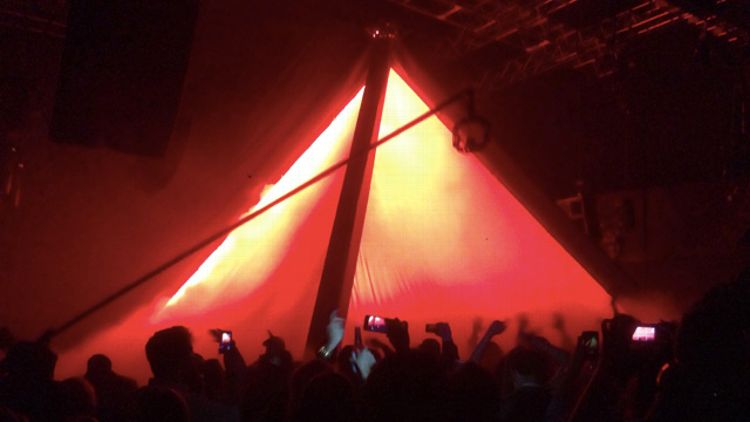 If my understanding is correct, the phenomenon known as “TV Upfronts” are the time for networks to show off their success — compared to the competitors — as well as highlight all the great things that the future holds for said channel. Is that right, resident expert?

While it was a good show, and every bit the spectacle that was expected (expectacle?), in retrospect it was an appropriate venue to highlight the full range of emotions, reactions, and realizations that a Kanye West fan goes through at a Kanye West show.

1. The belief that Kanye won’t show up:

Even with multiple forms of confirmation that Kanye was certainly performing, at the end of the day, Kanye does what Kanye wants. So, while a “Kanye’s hitting the stage at 10:30” alert is more comforting than “he’ll probably go on at 2 a.m., once we figure out where he is,” there’s no way to fully ignore the other thought: “Why the hell would Kanye show up to this Aqua Teen Hunger Force party?”

2. The realization that Kanye is actually present:

The lights went down and a 24-esque countdown clock began in the corner of the room. This is good.

3. The reality that you know every Kanye lyric:

4. The moment you hear a new Kanye song and desperately try to convince yourself that the song is good, even though you don’t really understand what you’re listening to and are praying it doesn’t make the final album cut, because he’s 5-for-5 on albums and you don’t want him to go 5-for-6 because then you’re going to blame it on Kim:

Kanye debuts a new song that seems to disrespect both couches and Kris Humphries with this lyric:

5. Remembering that the drop on “Can’t Tell Me Nothing” and the hand claps/chants on “Power” could start a revolution and/or a crime spree, both of which you want to be a part of:

6. Understanding that “Kanye” is inside of a giant pyramid and it might actually be a hologram Kanye, especially since there was that one point when he dissolved:

7. Ultimately not caring that Kanye might actually be Hologram Kanye, because his songs are being played very loudly, and they are jams that lend themselves to our greatest dance:

8. The internal monologue that occurs when he finally plays an 808s & Heartbreak song and you’re forced to acknowledge how wrong you were about not liking the album when it came out, mainly because you, too, were in a weird place in your life in 2008:

9. The moment another, even stranger new song comes on, making it harder to just shrug it off, and making it really, really easy to blame Kim for everything:

10. The realization that not only do you know every Kanye lyric, but so does everyone around you, which creates a fantastic concert atmosphere:

11. The time you roll your eyes at Kanye when he restarts a song because he wants the mostly white crowd to say the word “n—-,” all probably stemming from him having this skewed idea of himself as both post-race and a 2013 Marcus Garvey:

“All of the Lights”

12. The unavoidable jolt of excitement when Jay-Z MIGHT come out for a verse, but then he doesn’t, but neither does Big Sean, so you call it a draw:

13. The moment when you have to face the reality that one of your favorite artists ever might be one of the most horribly childish adults ever created:

So I don’t want no people runnin’ up on me with cameras, trying to like sell pictures and shit to magazines, asking me dumb-ass questions, throwin’ me off my focus and shit. Harassin’ you all muthafuckin’ day. I ain’t no muthafuckin’ celebrity.

It’s so funny. Somebody asked me, “When you do SNL, are you going to do a skit about the paparazzi and shit. And like humanize yourself?” I ain’t here to apologize to no muthafuckas, man. It ain’t about me humanizing myself. At one point did I become un-human where I had to turn myself back. Or maybe I was demonized, or maybe I was treated inhumane and not human in that type of situation. I ain’t no muthafuckin celebrity. I ain’t runnin’ for office. I ain’t kissin’ nobody’s muthafuckin’ babies. I drop your baby and you muthafuckin’ sue me and shit. I’m trying to make some music that inspires people to be the best that they can be. And I don’t want nobody else to ask anything of me! Don’t ask nothing else of me.

14. The moment when you want to stay silent for “Don’t Like,” because it mildly represents everything that’s wrong with Chicago’s violent South Side, but then you can’t help yourself, and are jumping up and down by the time Kanye brings up Suge Knight:

15. The moment you realize it’s definitely not a hologram Kanye because he forgot some of the words, which would be an odd (but sophisticated) feature to program into a hologram:

16. How hearing “All Falls Down” takes you back to 2004 and you remember old Kanye — College Dropout Kanye — the boyish, weirdly dressed, self-conscious, not very cool Kanye, and it makes you smile because you miss him:

17. The point when you’re screaming the lyrics to a song you usually wouldn’t be caught dead singing, because it’s almost like saying “Hey Ya” is your favorite Outkast song:

18. The realization that Kanye has been onstage for an hour and you can’t help but wonder how many millions of dollars Adult Swim paid him to do this long of a set, but love them for bankrupting themselves for our pleasure:

19. Not having the first issue with admitting “Runaway” fully absolves Kanye of all of his childish, diva antics and publicly acknowledging, because of this song, you will probably allow him to act a fool for the rest of his life, because he made this song, and it’s everything, why are my eyes watering, the end: