The Situation’s Next Conquest: Rehab 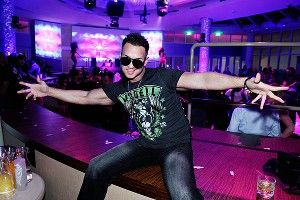 Jersey Shore still does huge ratings numbers, and MTV has already announced they’re bringing it back for a sixth season — but things are getting a little depressing over in Seaside. Exhibit A: according to TMZ, Mike “The Situation” Sorrentino is now seeking treatment for substance abuse. As they explain, “A rep for the Situation just contacted TMZ to say they are not confirming that Mike is in rehab … just that he ‘has spent the past several weeks at an undisclosed location for much needed rest and recuperation after his extensive production and appearance schedule.'”

Other TMZ sources say that “he was getting worse” as the season went on, and point to the season five episode where the cast went camping as proof of his issues. Apparently, if you’re paying attention, the dude was being “paranoid” and “can be seen acting jittery, sweating profusely and just plain acting bizarre.” (But, like, more paranoid, jittery, sweaty, and bizarre than usual?) Meanwhile, concerned parental watchdog groups continue to fear for the well-being of Snooki’s future baby. Has a certain real-life responsibility — to your own kidney and/or fetus and/or mental well-being — malaise crept into the Jersey cesspool? Let’s consult the grandest of reality TV experts, David Jacoby: “America’s feelings about this show pretty much mirror the cast’s feelings about the roof-deck hot tub. Both were super-exciting novelty items at first. Now, the novelty has worn off and they feel like neglected relics of parties past that pose a serious health risk and should be avoided at all costs. I have watched my last episode of Jersey Shore.” Anyway: feel better, Mike.

One Victory at a Time: Justified Season 3, Episode 10