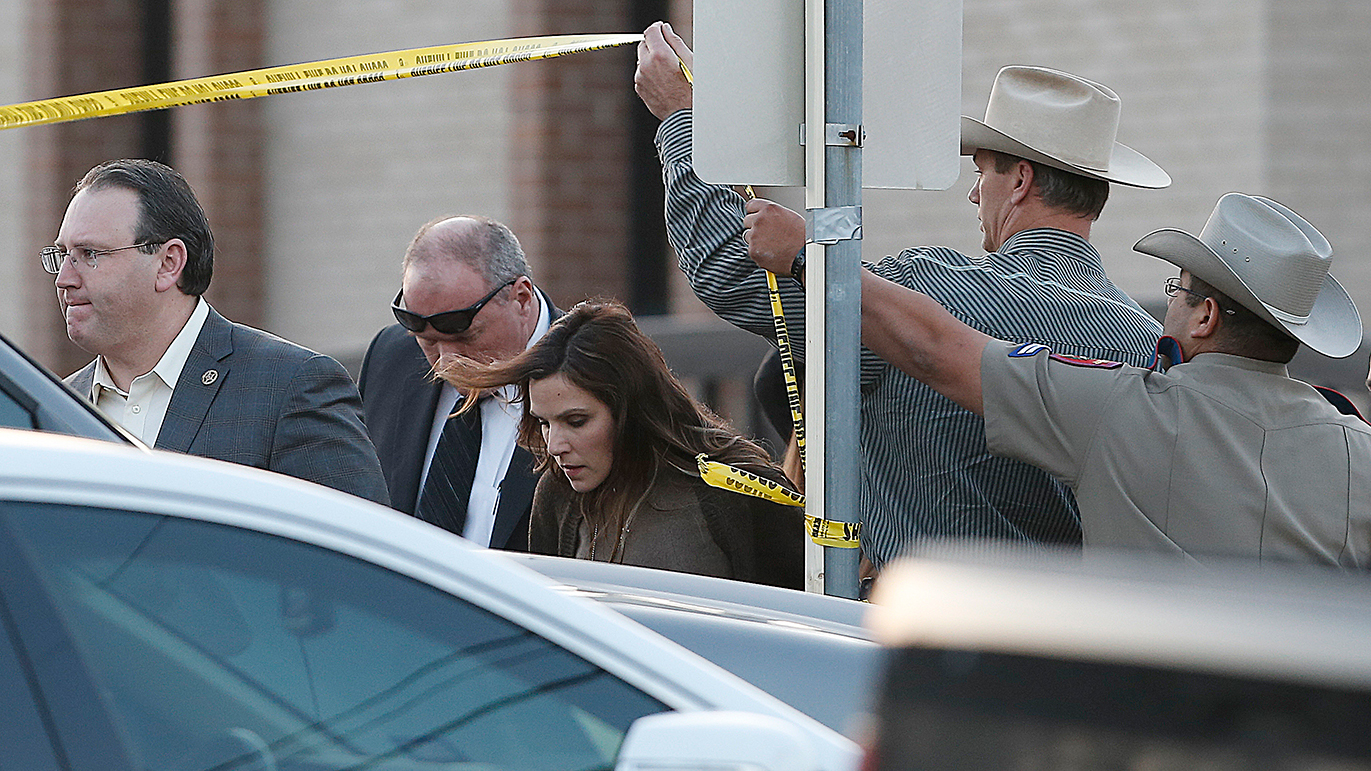 At this past Sunday’s Oscars — which took place two years after the death of Chris Kyle — American Sniper was both a signifier of commercial muscle and a punch line. At one point in the broadcast, host Neil Patrick Harris boasted of the movie’s $300 million box office haul by comparing it to Oprah (“because you’re rich”). He also brought up Kyle’s infamous kill count with a huge smile and a stupid joke: “Over 160 confirmed kills. Or, as Harvey Weinstein calls it, a slow morning.”

There was something that made Harris’s winking stage banter all the more surreal; the same thing that has hovered over American Sniper’s surprising commercial success: Over the last few weeks, in Stephenville, Texas, the trial of Eddie Ray Routh — the man who killed Chris Kyle — has been unfolding. According to the New York Times, “Legal experts said it appeared to be the first time a popular film portraying a murder victim as a hero was playing nationwide at the same time as the trial of the alleged killer.”

On Tuesday, after a weather delay, closing statements were heard. The jury deliberated for less than two and a half hours. Tuesday night, at 9:15 p.m. CT, they returned a verdict: Routh was guilty of murder. He will serve life in prison without parole.

On the opening day of the trial, Kyle’s widow, Taya, took the witness stand and spoke, through tears, of her loss. On Sunday, she walked the red carpet in a gown, her husband’s dog tags in hand.

“To say that your husband is an American hero is an understatement,” Al Roker told her. She nodded softly in agreement. 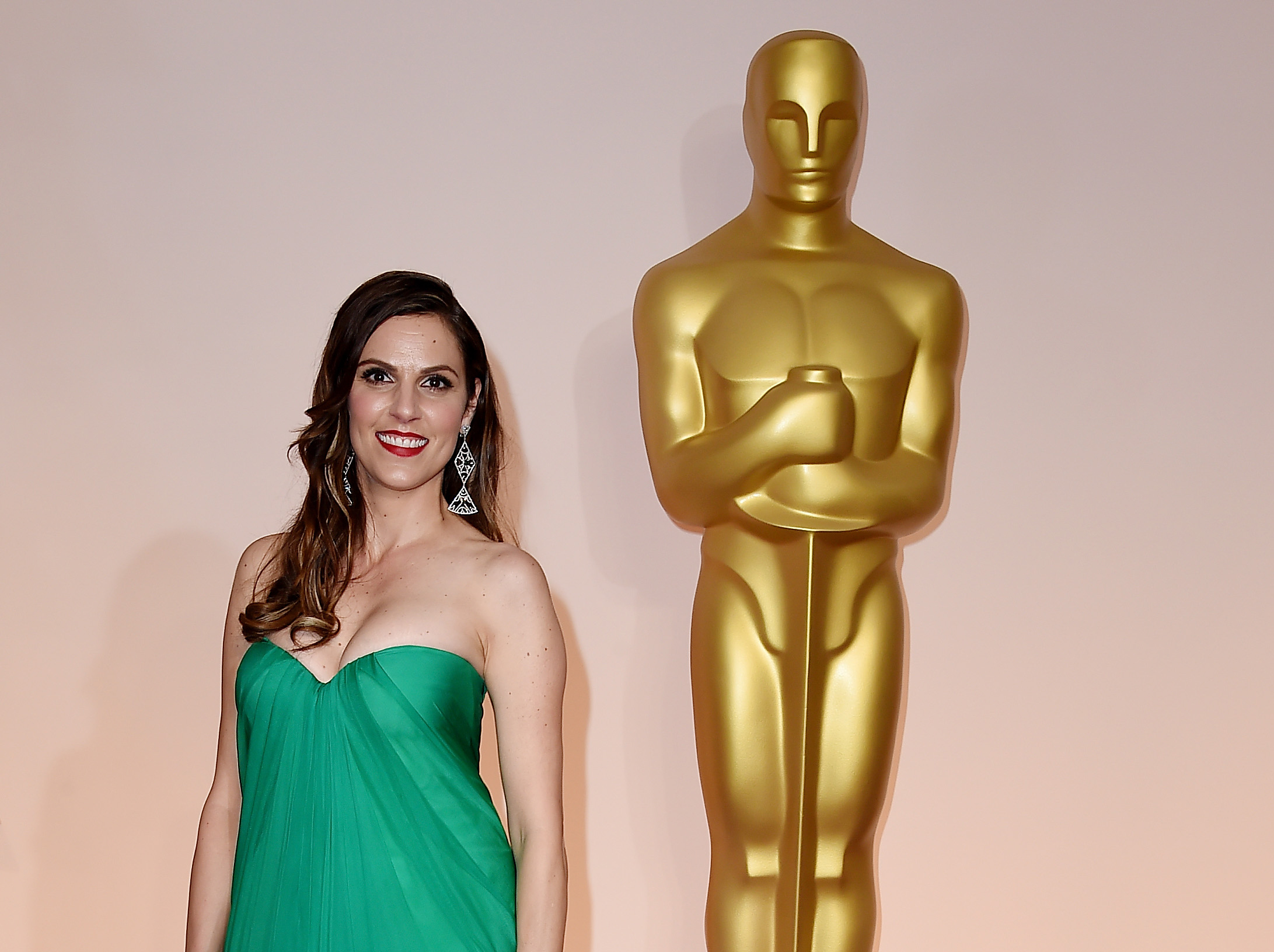 The story of American Sniper is an intersection of real life, memoir, and Hollywood. The film features an almost mind-bogglingly anachronistic treatment of enemy combatants — or, to use the favored term from both the real and fictionalized Kyle: “savages.” “You’d have to go all the way back to 1941’s immensely popular hit Sergeant York,” wrote Grantland’s Mark Harris, “to find an Academy Award–nominated war movie that so directly equated American war heroism with a body count.”

Kyle’s supporters describe him as a paragon of American selflessness, even though he wrote a book about himself that made him famous. Famous enough to pal around on Conan and with any number of beaming Fox News anchors; famous enough to pop up on NBC reality shows.

In Grantland’s Oscar Preview, Chris Connelly said a salient thing about the 84-year-old Clint Eastwood: “He doesn’t care about a lot of the stuff that people care about. He doesn’t have time. If he sits and thinks about what Sienna Miller’s backstory should be, or what should actually inspire that character to join the Armed Services … he’s not gonna make another movie. He’s a man in a hurry.”

Eastwood famously shoots very few takes per scene. With Sniper, this process resulted in a film that hammers points home: wham, impossibly difficult fog-of-war decisions; wham, PTSD; wham, joyful resolution of PTSD through familial salvation. That’s Clint’s version, and he is assured in it — looking at those box office numbers, justifiably so.

Here’s where things get complicated: Chris Kyle was not killed in battle. He was killed on a shooting range in America by a fellow Texas-born, Iraq War veteran. As the Times reports, “Mr. Kyle and Mr. Routh attended high school in Midlothian, Tex., 14 years apart. Both veterans had been arrested for drunken driving upon their return home. And both were on medications that day at the shooting range.” 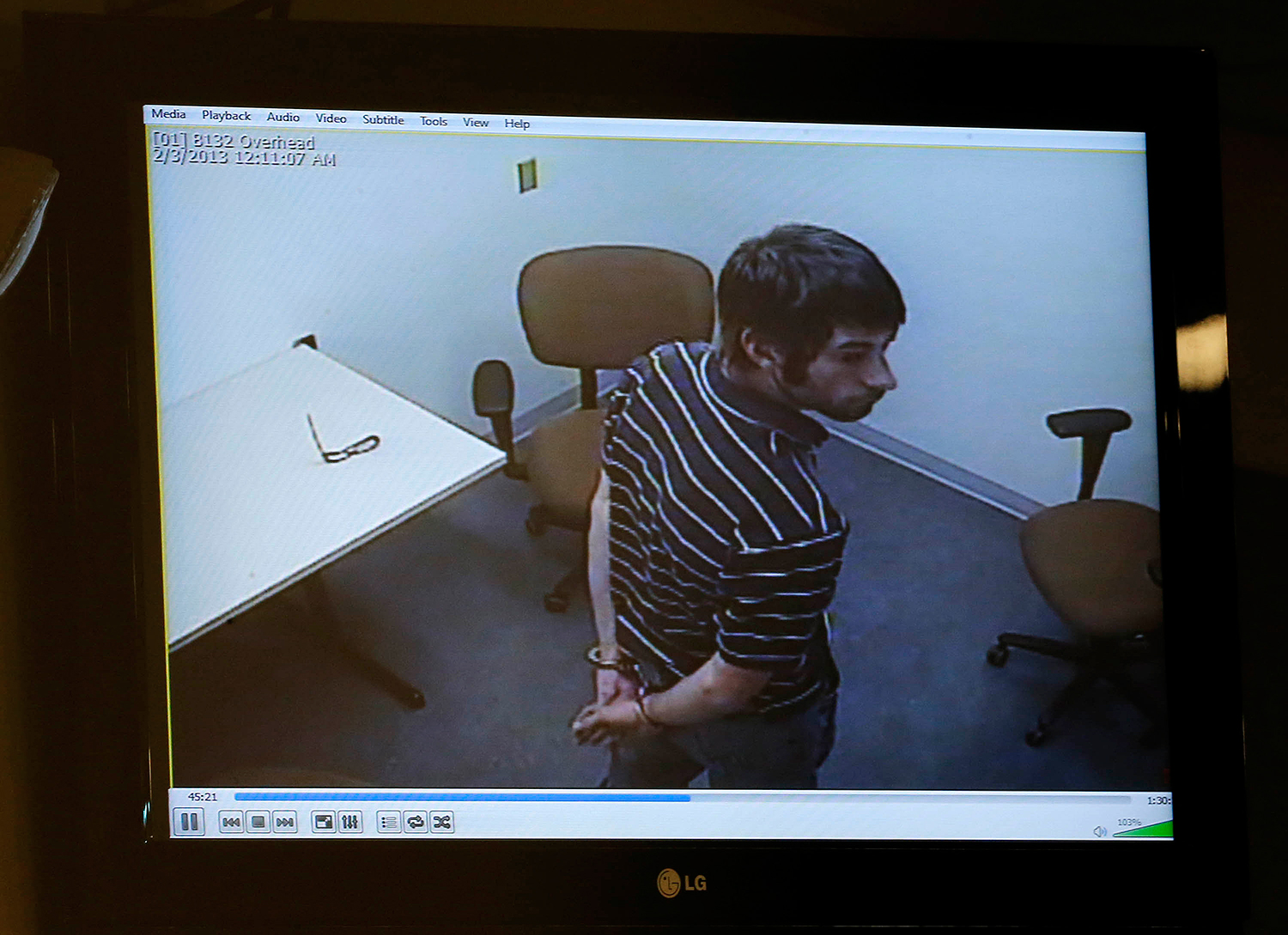 Paul Moseley/Fort Worth Star-Telegram/TNS via Getty Images
In 2013, reporting for The New Yorker, Nicholas Schmidle wrote the remarkable “In the Crosshairs.” In the piece, Schmidle describes Kyle’s homecoming, presenting a much darker image than the one we see in Eastwood’s film. He had an actual drinking problem, a dangerous one: In 2010, Schmidle writes, “Kyle was driving alone in central Dallas … when he lost control of his truck and crashed into a wooden fence, nearly ending up in someone’s swimming pool.” It presents a much darker account of his troubled marriage, too. Kyle was going to reenlist for a fifth time, it turns out, until Taya issued an ultimatum: war, or his family.

Schmidle’s piece also presents a much richer account of Kyle’s postwar work with veterans, with whom he’d develop personal relationships by taking them shooting and hunting. Kyle came into contact with Routh after being contacted by Routh’s mother, who worked as an aide in the special-ed program of the school Kyle’s children attended. She was the one who asked Kyle to help Routh.

“A few hours after she had introduced herself to him in the school parking lot,” Schmidle writes, “she was called down to the principal’s office and found Kyle there, waiting. He could sense her desperation and had come back to the school to hear more. They found an empty classroom and sat at a horseshoe-shaped table … Kyle promised Jodi, ‘I’m going to do everything I can to help your son.’”

On February 2, 2013, Kyle and his friend Chad Littlefield took Routh to the rifle range at the Rough Creek Lodge in Iredell, Texas. They had met Routh for the first time that day. That afternoon, Routh shot and killed them both. Littlefield suffered multiple gunshots to the chest. Kyle was found shot in the back and the back of the head. The defense had pleaded not guilty by reason of insanity. (Routh was most likely going to spend his life in a state institution. The question was whether it would be in a prison or a mental hospital.)

The question for the jury was whether Routh knew what he was doing. It had a political element, too: The prosecution wanted to strip away from Routh his claims of PTSD. One prosecutor called it a “myth.” They picked at his service record and tried to debunk some of his grislier accounts — most notably, his alleged handling of the “bodies of babies in a mass grave in Haiti as part of an earthquake-relief deployment.” In the prosecution’s case, Kyle, a hero soldier, was allowed to suffer PTSD. Routh, a murderer, was not.

Nicholas Schmidle’s reporting was used in court. The jury was played portions of his phone interview with Routh.

“Later in the phone call,” CNN reported, “Routh complained that Kyle and Littlefield stopped to feed him at a fast-food restaurant on the way to the range. It was ‘strange’ because he wasn’t hungry, and he felt the two men were trying to ‘force feed’ him.”

According to Gene Cole, an officer in the county jail where Routh has been held, Routh has said, “I shot them because they wouldn’t talk to me. I was just riding in the backseat of the truck and nobody would talk to me.”

According to Dr. Mitchell Dunn, a forensic psychiatrist for the defense, “Routh believed that some people were half-pig and half-man, and that co-workers at a cabinet shop where Mr. Routh had worked were cannibals who wanted to eat him.” According to the prosecution, Routh’s not that crazy: He cribbed the pig men thing, they say, from Seinfeld.

In the time since his arrest, Routh has gained a significant amount of weight, and has shaved his shaggy hair to the scalp. He’s almost unrecognizable from his first published photos. And as the legal teams fight over who or what Eddie Ray Routh was, that seems appropriate enough. 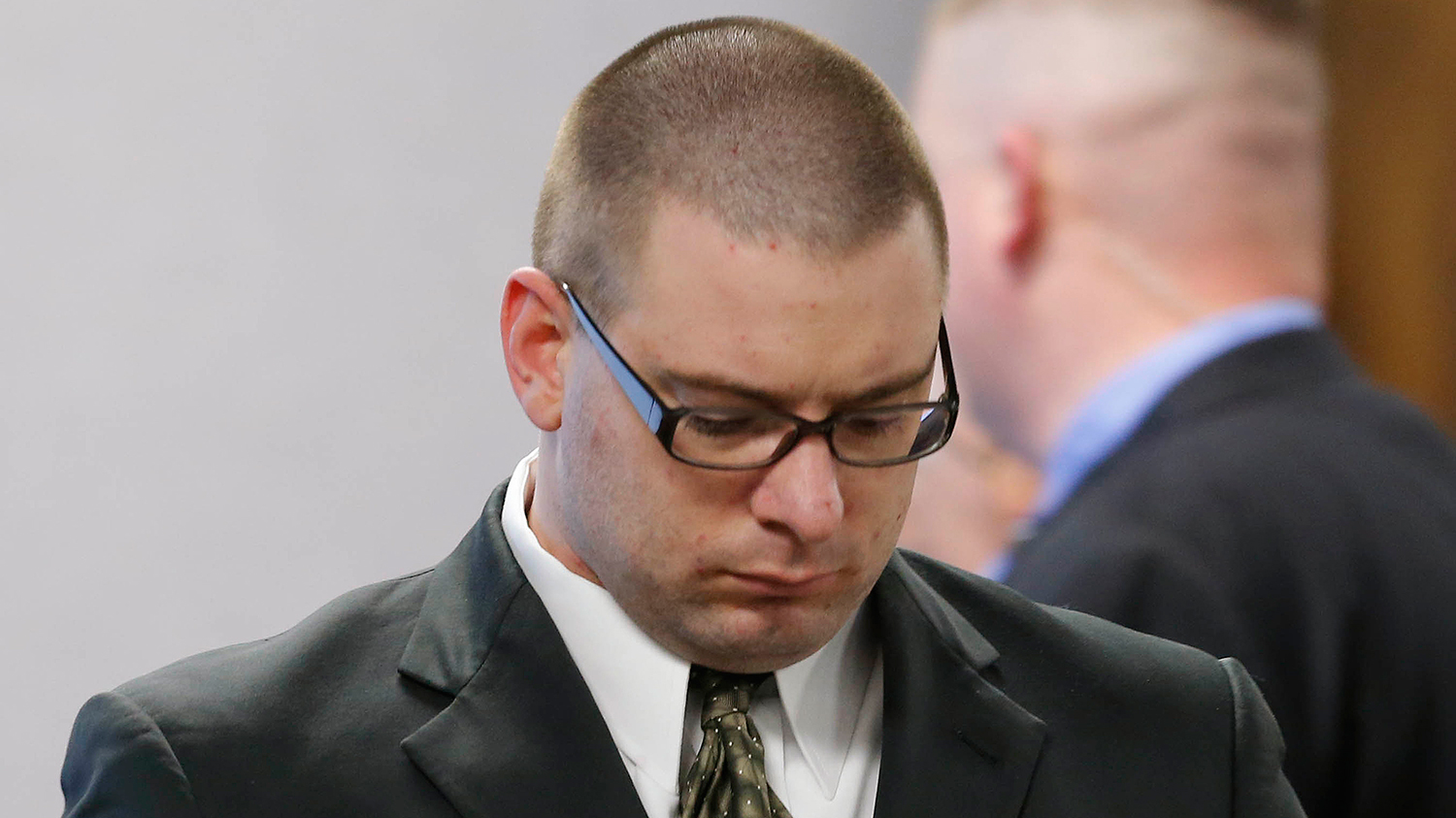 Chris Kyle became a celebrity for killing people — some of them innocent, whatever that means to you — in an unpopular war. American Sniper made sure that he would be remembered forever, for his actions in Iraq, as a hero. However vociferous they get, the movie’s critics can’t get in its way now. It has become a cultural touchstone. We will be talking about this movie for a long time.

In some ways — no matter what happened to Chris Kyle, before and after his military service — American Sniper, a film directed by Clint Eastwood, starring Bradley Cooper, will become a more permanent record of Kyle’s life than anything else.

“She said, ‘You are going to do this movie,'” Jason Hall, the movie’s screenwriter, recalls of a conversation he had with Taya soon after the murder of Chris Kyle. “‘Get it right. Because this is how my kids are going to remember their father.'”