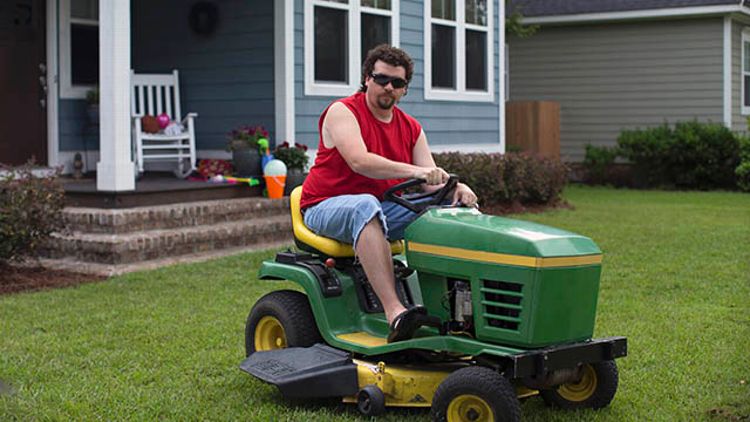 If you like your male antiheroes trapped in suburban normalcy with demons they can’t escape no matter where they go, why shed a tear over the end of Breaking Bad when you can pop open a few cans of beer and celebrate the return of Eastbound & Down? Season 4 of the Kenny Powers saga debuted last night, and it worked as a chill-out chaser for the Breaking Bad finale, but was also a fun house mirror version of the story of Walter White. Instead of a good man gone bad, Kenny is now a bad man turned good. He has muted his id for the sake of his family, and he has learned to accept a regular life with a low-status job and a home with a yard. In place of the Jet Ski is a riding mower, and Kenny has traded in late nights in the bar back room with Clegg for yuppie dinner parties with friends at the home he shares with April.

But something stirs deep in the heart of Kenny Powers, an inescapable evil he can only resist for so long, an awesome selfishness that is the core of his true being. “Chapter 22,” as the first episode of the fourth season, plays out kind of like a horror movie. How long can Kenny keep pretending to be the Kenny that April wants him to be before he slips up and shows his real colors? Can a born alpha male like Kenny really reinvent himself as a beta milquetoast, or is he doomed to fail? There’s a perverse satisfaction for viewers watching somebody dismantle their life. If anyone has ever been poised to go the full Falling Down, it’s Kenny Powers. Without spoiling things too much, Kenny’s undoing will remind you that you should really not be rooting for this guy. Even still, you will find yourself encouraging him to make all the wrong choices, just to see what happens.

After ramping things up in the last two seasons (Mexico! Myrtle Beach!), Season 4 sees a return to North Carolinian innocence. He’s back in the small town that Season 1 took place in, with its hordes of rule-followers. He’s also chafing against his new role as the non-breadwinner in the Powers household, trying to make sense of a world in which April gets more applause and awards than he does. Temptation comes to Kenny in the form of Ken Marino, as Guy Young, another former baseball player who transitioned into a second-act career as a sports pundit. Marino has built a small cottage industry out of playing clueless douches, and Eastbound immediately seemed like a natural fit for his immense talents.

With just one taste of the rainmaker lifestyle, Kenny remembers his destiny, and it’s only a matter of time before the beast is unleashed. You’ll end up grappling with why it is exactly you want to see Kenny release hell on the existence he just barely salvaged from the jaws of death. Sadism? Masochism? Nihilism? Who knows. It’s nothing against Sky— I mean April. You can’t keep a waterfall in a paper cup, a firestorm in a matchbox, or a jaguar in a pillow fort. Once Kenny goes to the dark side again, he’s obviously never coming back. We just want to see how he does it.