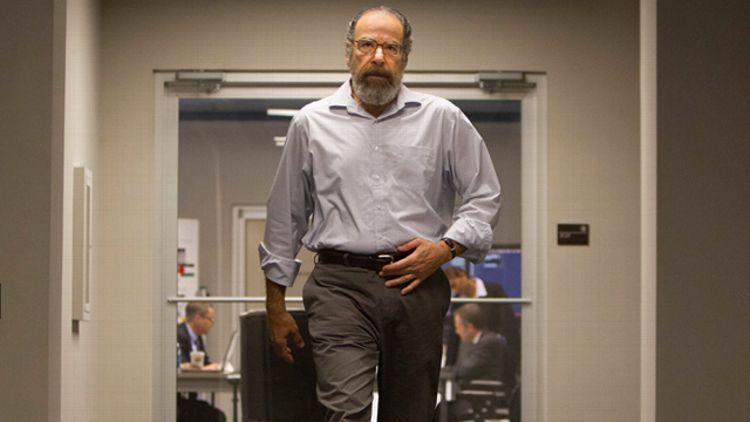 There has always been a strong element of silliness to Homeland, but the way it has been handled has been consistently smart. At its very best, the show mimicked not the plausible particulars of our national security mechanism, but instead the real emotional mania that has rumbled like a subway line beneath the insecure decade since 9/11. Claire Danes’s Carrie Mathison was so spooked and ravaged by the massive intelligence failure that defined the beginning of her career that she’d lost all perspective on what she was looking for; in her medically maintained head, the ideas of saving her country and saving herself had become dangerously intertwined. By asking questions that were almost impossibly crazy — a Marine hero turned Al Qaeda sleeper? Turned congressman? Turned presidential running mate? Turned CIA asset/doomed hero? — Homeland actually found a way to dramatize ideas that were uncomfortably, often painfully, true. How can we spy on the world without taking a hard look at ourselves? Do we want actual security or just the illusion of safety? And is one more possible than the other?

Though the show’s second season wasn’t nearly as catastrophic as some critics maintain — in fact, some of it was outrageously good — its latter half did give itself over to a certain kind of madness. Part of it was commercial: In a business as unpredictable as television, it’s awfully hard to kill off an Emmy-winning co-lead, no matter what the facts on the ground are telling you. But even reasonable business decisions can have creative consequences. Despite Damian Lewis’s dwindling usefulness, Homeland’s brain trust seemed so wedded to the idea of keeping him employed that it transformed Carrie and Brody’s fatal attraction into a full-fledged harlequin romance, thus imbuing something wonderfully twisted with a bogus, unpalatable righteousness. The two had an extraordinary connection, sure, but it’s the same one an addict has with the bottom of a whiskey bottle. Pretending otherwise seemed to serve Homeland’s long-term viability more than its audience. Mistaking the couple’s kink for commitment felt like staging a Catholic wedding in an S&M dungeon, and it was about as easy to watch.

Still, the second-season finale, “The Choice,” repaired much of the damage. It was a cold, welcoming smack of reality — well, it’s Homeland; let’s call it “reality” — after an emotional bender. The smoking crater where the CIA (not to mention a number of supporting characters) used to stand became a horrible monument to Carrie and Brody’s folly. While they were playing footsie, Abu Nazir and his ilk were playing to win. I hoped that with Brody gone and, quite possibly, forgotten, the show could reinvent itself to better reflect the changing nature of the never-ending war on terror. Perhaps our remaining protagonists could take a break from making the political into the personal and demonstrate instead how everything is now just paranoid. Recent headlines have revealed a spy system infected with Carrie Fever: The question is no longer who watches the watchers, it’s who isn’t watching. It seems like people aren’t just getting away with this stuff. They are, in true Homeland fashion, getting off on it, too.

I’m sorry to say that “Tin Man Is Down” didn’t alleviate the concerns I had heading into the third season as much as it sustained them. Like a newly sober person regarding his last binge, showrunner Alex Gansa — who co-wrote the episode along with Barbara Hall, a TV vet new to the staff this season — seems intent on dutifully sifting through the wreckage, even when the best course of action may simply be to move on. In computing and robotics, there’s a term for the strange disconnect when artificial creations are made to look too real and, for that reason, look completely fake: the uncanny valley. And that, I’m afraid, is where Homeland’s third season begins. The show is asking us to consider a world that is no longer remotely recognizable as our own: A second 9/11 has just occurred, wiping out a considerable amount of the governmental power structure, and the no. 1 suspect is a sitting American congressman. This isn’t just unfortunate, it’s incomprehensible. But Homeland nobly, perhaps foolishly, insists on playing it straight. I’m all for radical fiction, but this raises the level of storytelling difficulty — in terms of tone, in terms of representation, in terms of empathy — to an uncomfortable, almost impossible level. Homeland, like Nicholas Brody, has wriggled its way out of all sorts of compromising situations in the past. But this might be a bomb too far.

And so, instead of depicting a world gone mad, Homeland focuses on the personal toll this outrageous tragedy has taken upon one Carrie Mathison. Challenging as this may seem, Danes is, as ever, up to the task. She’s the only actor alive capable of playing a nervous breakdown with the precision of a standardized test. Whether she’s crumbling under oath or ginger-hunting in the tequila aisle, Danes is always able to locate the quivering reservoir of self-loathing and regret at Carrie’s core. Carrie is a supposedly brilliant woman who has suffered severe organ failure twice now: first her brain, and then, more catastrophically, her heart.

Danes’s performance is so visceral and affecting that it almost backfires. As new cast member Tracy Letts, as CIA-hunting Senator Andrew Lockhart, fulminates from on high about the massive intelligence failures that led to his world’s current predicament, it’s almost impossible not to look at Danes’s shattering face and think, He’s right. As the producers of Marvel’s Agents of S.H.I.E.L.D. have also realized, it’s a tough time to be asking audiences to cheer for the secrecy-obsessed men in the black helicopters, not those looking to bring them down. And the line Homeland draws in its sand is a grave one: Carrie and Saul really did know that a sitting congressman came within a phone call of detonating a suicide vest inside the Capitol. And yet they did nothing about it, allowing Brody unfettered access both to the vice-president and to nearly every major landmark in Washington. I love Mandy Patinkin’s performance as Saul as much as anyone, especially now that he has, in F. Murray Abraham’s dark Dar Adal, a playmate worthy of his talents. (Seeing the bearded Saul banter with the lithe, feline Adal reminded me of the YouTube video in which a bear cub lovingly mauls a kitten.) And Lockhart seems like a needlessly cruel, exposition- and cheap-shot-delivering grandstander. But unlike nearly everything else in Homeland’s spicy soup of intrigue and remorse, this seems fairly cut-and-dried to me. Shut it down!

But that’s unlikely to happen. Instead, we’re left to ponder the purpose of the CIA in a drastically reshaped world. It was a smart choice to open the season with Peter Quinn, who is ostensibly on the side of the angels, meticulously constructing an IED. “We’re not assassins, Mira. We’re spies,” says Saul to his wife before proving exactly the opposite with a splashy, kid-killing mission. This was Homeland back at its best: unsettling and intimate, willing to suggest that, contra Saul, even when we “win” we still inevitably “fuck up.” I’d say the same thinking could be applied to those of us who clamored for Patinkin to have an increased role on the show. Saul’s now the acting head of the agency (even though, honestly, having a guy with that much facial hair in charge of a clandestine service seems like the most implausible thing Homeland has ever done), putting him and his creaky moral compass front and center of every major plot point. The suggestion that he shares a past with the Iranian “magician” is potentially fascinating and a nice echo of the relationship between John le Carré’s rumpled hero, George Smiley, and his Communist counterpart, Karla. But it has also rattled the character in ways big and small: Would the circumspect Saul really sell out his protégé in front of the Senate and 100 clicking cameras? We have two seasons of precedent establishing that he has always chosen work over family — just ask Mira about that one — but Saul seemed to have found the ideal combination of the two in Carrie. Even now, at her worst, it’s hard to believe that connection would waver.

Other lingering connections are also in doubt. The biggest question mark of Season 3 concerns the whereabouts of Sergeant Brody. Nick himself was mercifully absent last night, leaving a hole in the narrative larger than the one smoking outside of Langley. His family, however, was more than present. I’m of two minds on this one. My blind support of Dana Brody and Morgan Saylor, the actor who plays her, is just a stitch shy of the devotion Carrie has for Nick: Even when all evidence is telling me it’s a bad idea, I just can’t quit it. And the idea of Dana suffering from her father’s betrayal most of all makes sense: It was she who was the closest to him, even through the scrim of lies. The specifics of her suicide attempt are tough but feel true. There’s something haunting about how Dana, in her darkest hour, seemed more than capable of ending her own life, a concept that caused her father, in that vice-presidential bunker, to waver. She is as good a conduit as any to represent her father’s gross betrayal of country and family.

But I don’t know if that representation demanded the introduction of a troubled, ectomorphic hunk and a subsequent series of furtive selfies. Even with the emotional weight of Saylor’s performance, much of this story felt like a vestigial tail — something we could have checked in on in Episode 5. We didn’t need to sit down to dinner, even if Grandma was making her famous chicken. (And pity poor Chris Brody! His father, the hero, has gone, adolescence has taken its place, and he still has nothing much to contribute. I actually wouldn’t mind some insight into the Kuma War raging inside his teenage head.) Still, Dana’s joke about the positive guy jumping off a building was a good one. When it comes to Homeland, I always have been and will continue to be an optimist. The rest of this season isn’t nearly as daunting, or guaranteed, as the rapidly approaching ground. But last night was the first step toward finding out. It’ll be clear soon enough if we’re flying or falling.

SNL: Tina Fey and Aaron Paul Hold Our Hands As We Meet a Cast Full of Newbies