The New Nicki Minaj: ‘None of It Matters If She Can’t Rap’ 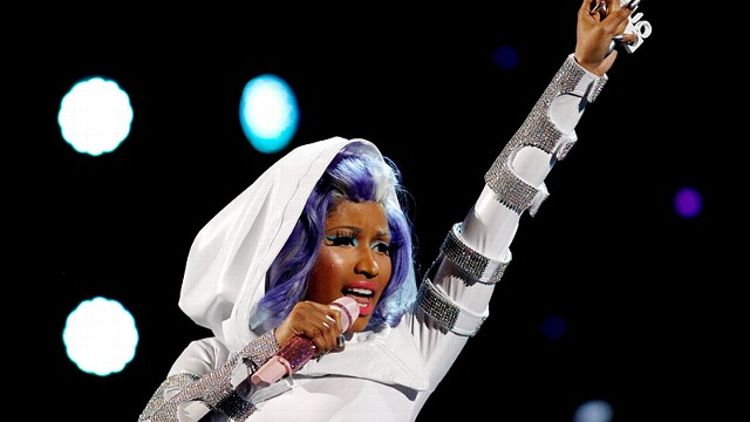 Nicki Minaj is in a bad position. She wants so badly to satisfy people and be all things to everyone; pop and rap, mainstream and underground, soft and hard, radio-friendly and NSFW. She wants to have street cred and still sign huge deals with Pepsi. She exists simultaneously as a female rapper surrounded by males and a pop star alongside Katy Perry and Rihanna in the sisterhood of the sparkling hot pants. Minaj’s own oeuvre divides her fans into camps, and on Pink Friday: Roman Reloaded she tries to please them all. “Starships” is for the Nicki fans who liked “Super Bass” but don’t want “Stupid Hoe.” “Stupid Hoe” was for fans of “Massive Attack” and her rawer, older mixtapes. As a result, she comes off sounding like neither Nicki the Barbie nor Nicki the Boss but Nicki the Overstretched. Like Garth Brooks, Eminem, and Beyoncé before her, she turned her split public persona into part of her gimmick, but you can feel her searching for where her actual self lies. Album lowlight “Marilyn Monroe” addresses the struggle of being a privately unsatisfied public sex symbol in the most hackneyed way possible, and feels written for somebody else.

With the pressure of the expectations she has created for herself and publicly promised to fulfill, Minaj is now charged with the impossible task of representing all women in mainstream rap. She wants to keep the young female audience she picked up with Pink Friday without losing the men who liked the Beam Me Up Scotty tape. If rappers tend to be hungriest while on the way up, what is there to rap about once you’re well-fed? Minaj doesn’t seem sure, so she oscillates through a laundry list of options — drug rap, relationship rap, her many material possessions, the hard life in her old neighborhood — without really excelling at any of them. There is no standout or instant classic. Who knows whether narrowing her focus would have helped, but Roman Reloaded feels rushed, unsteady, and unsure of itself. It doesn’t matter how cool she looks in magazine editorials, how many brands she endorses or launches, how many more new alter egos she invents. None of it matters if she can’t fucking rap.

I imagined that “Come on a Cone” would be an X-rated one-upping of Rihanna’s “Birthday Cake” and was disappointed to find that it was just about diamonds (i.e., “my ice is so cold it should come on a cone”), but a truly great rapper can make soup out of anything. I wouldn’t mind if Nicki went for pop hooks about cars and clothes and diamonds if the rapping were clever or the hooks catchy enough — but everything here feels strained and particularly devoid of wit, like it was pumped out fast to meet a deadline. It’s not like albums by male rappers aren’t generally very hit-and-miss. Stone-cold, front-to-back classics have always been hard to come by. But Minaj throws everything she’s got at the wall, and only some of it sticks — while the rest falls right off like stuffed animals taped to a dress. The “pop” second half of the album, particularly, has more filler than a Real Housewife of Beverly Hills.

It’s not like we couldn’t have expected this, particularly after “Massive Attack” was shelved on Pink Friday in favor of the Will.I.Am kidz’ bop of “Check It Out.” The palatable electro-pop Nicki sells better than the weird experimental hip-hop one, and those of us who prefer the latter will have to make do with the genuine weirdness of first track “Roman Holiday.” When Nicki tries to combine her split personalities back into one, her fans criticize her for coming off too incoherent, alienating all of her audiences (she did manage to pull it off once with “Moment 4 Life”). Her “Roman Holiday” performance at the Grammys, with its exorcism set piece and musical theater-style chorus, was received with a lot of crickets. But there was something about the sheer intensity with which she went for it, and it’s the only thing I still remember about the Grammys. Some starships aim too high and blow up in space.

Back around “Check It Out,” she begged for competitors (“yes, I would love some”), but you can sense that she has no idea what to do about the crop of younger female rappers coming up. In true Mean Girls fashion, she and fellow New Yorker/up-and-comer Azealia Banks both claim to admire the other, while shading each other in the kind of subtle way that can be laughed off as far-fetched when pointed out. I couldn’t not read Nicki’s line in “Raggedy Ann, you could never be a Barbie bitch” (from “Roman Reloaded”) as a dig at Banks, who wore two braids in her “212” video. Maybe Minaj misses being the newest kid at the party, or is afraid that rap can only handle one token female rapper at a time. Or maybe she doesn’t know how to assert her power on a track without talking about having a dick. But the more egotistically infallible she tries to sound, the more insecure she actually seems.

Once you accept Roman Reloaded for what it is — a mess — it becomes palatable on its own terms. She sounds like Eazy-E on “Beez in the Trap,” her Queens-accented girlish voice coming through without any of her more gimmicky affectations to prove that she still has the chops and charisma in there somewhere. The Red-One–produced single “Starships” is meant to be a radio-saturating disposable summer earworm, and it succeeds exactly on those terms, smelling like sunscreen and oddly recalling the vanilla hits of Sugar Ray. There are enough pop radio hits that Roman Reloaded definitely won’t sink like a stone. “Whip It” and “Pound the Alarm” feature some of her worst rhyming ever, but the Ibiza-friendly choruses are guaranteed to be heard blasting out of Jeeps on the strand until September.

Sophomore albums are notoriously tough to pull off. The Nicki we fell in love with in the first place is still there somewhere, buried under the wigs. If Nicki really is “the female Weezy” like she claims, she ought to take a tip out of her mentor’s playbook and practice a whole fucking lot so that she can be better. It’s not that we don’t want Nicki to excel at everything. We do. But Roman Reloaded doesn’t feel like a victory lap around both sides of the arena; it’s a long marathon run by somebody who has proven herself to be one of the best sprinters in the world on guest verses. Minaj has so much potential and has climbed so high already, she doesn’t know where to go now from the top floor. I would love it if she made a lateral move into even more genres (DANCEHALL ALBUM, PLEASE). At the very least she’s bought herself more time and created a new persona we can all get behind: Nicki the Critical Underdog.

The One Where They All Fell in Love With Each Other: A Visit to the Set of Happy Endings