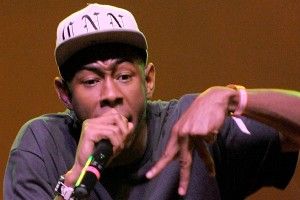 For the record, Odd Future’s Tyler, The Creator is no longer directing some little piddling podunk music videos. Oh, no, no, no: Mr. The Creator is now directing short films. The new clip for “Sam Is Dead,” a track off the recent group album OF Tape Vol. 2, comes complete with its own throwback poster heralding the footage as “A Film by Wolf Haley,” which is what Tyler calls himself when he’s directing stuff. So what’s the, uh, film about? Well, the OF crew are soldiers now, and they’re under fire in the jungles of what may or may not be Vietnam. A few lines of stock dialogue about apple pies waiting to be eaten back home and, boom, we get explosions, and later gunshots, and later dead bodies. Everything does look pretty great here, all crisp and clean footage, and it’s certainly on a higher order than most of the Odd Future videography. But what is the real difference between this “short film” and any of a million well-made music videos? Come on! Open your eyes! This has end credits.