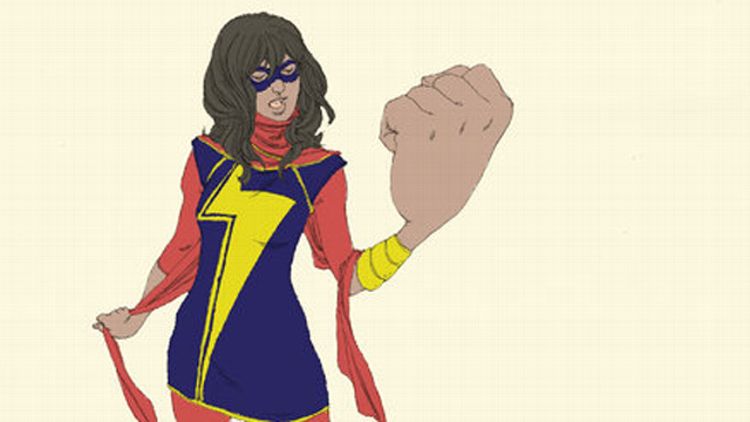 This February, Marvel Comics and writer G. Willow Wilson will introduce a new version of Ms. Marvel: In her non-costumed life, she’s Kamala Khan, a (presumably mild-mannered) Pakistani American teenager from Jersey City, New Jersey. The character’s launch will mark the first time either of the major comic book companies has published a book built around an American Muslim lead. Khan has as-yet-unspecified shape-shifting powers, and she’ll adopt the Ms. Marvel name because it’s a former alias of her favorite superhero, Carol Danvers, the statuesque blonde Avenger who now goes by Captain Marvel. Wilson told the New York Times that Danvers “represents an ideal that Kamala pines for. She’s strong, beautiful and doesn’t have any of the baggage of being Pakistani and ‘different.'” In other words, she’ll struggle with her identities — secret and otherwise — in the mighty Marvel manner, just like Peter Parker before her.

Because you can’t upend the stereotypes all at once, here is how Marvel editor Sana Amanat describes Kamala’s family life to the Times: “Her brother is extremely conservative.” [Sigh.] “Her mom is paranoid that she’s going to touch a boy and get pregnant.” [Sigh.] “Her father wants her to concentrate on her studies and become a doctor.” [And … sigh.] But if you haven’t already, go click on that Times story and take note of what’s going on in the image accompanying it, an illustration of Kamala Khan by Runaways artist Adrian Alphona, who’ll be drawing Ms. Marvel. She’s got a giant fist and she’s shaking it at a porcupine who appears to be wearing Hulk Hands. I bet there’s an interesting reason Kamala’s about to punch a porcupine, maybe even one that has nothing to do with her sternly traditional Muslim family! If this picture suggests anything, it’s that this book may be more fun than well-intentioned attempts to address a representational dearth typically are.

Which isn’t to say the dearth isn’t worth addressing. There are approximately 1.6 billion Muslims on the planet, but until recently there were approximately zero prominent Muslim characters in mainstream superhero comics (i.e., the ones published by either Marvel or DC Comics). In 2006, a Kuwaiti entrepreneur launched a superhero book called The 99, which is aimed at younger readers in the Middle East and features characters who embody Islam’s 99 qualities of God. And in the Urdu-language animated series Burka Avenger, which premiered on Pakistan’s Geo Tez network in July, a schoolteacher becomes a caped (and veiled) crusader who uses her ninja skills to fight fundamentalists who would deny education to young girls. But Muslims, Arabs, and Arab Americans all remain underrepresented in American superhero comics, a few asterisks notwithstanding.

Since 1980, Marvel has introduced three versions of a scimitar-wielding character called Arabian Knight. His most recent incarnation doesn’t even dress like a genie! Baby steps. Grant Morrison’s early-’00s run on New X-Men introduced Dust, a Sunni Muslim mutant from Afghanistan who could transform into a living sandstorm [sigh] and ended up joining one of the X-teams and wearing the circle-X insignia on her hijab for a while; X-Factor featured the Bosnian Muslim superhero Monet St. Croix. In terms of diversity in superhero comics, it’s almost always the X-books leading the way. DC, meanwhile, riled up conservative bloggers in 2010 with the introduction of Batman’s Paris counterpart, Nightrunner, a parkour master who was also an Algerian Muslim from the suburb of Clichy-sous-Bois. In 2012, the half-Lebanese writer Geoff Johns created the DC Universe’s first American Muslim Green Lantern: Simon Baz is a Dearborn, Michigan–bred Arab American ex–auto worker and [sigh] car thief and [confused sigh] street racer who becomes Green Lantern of Earth after the apparent death of Hal Jordan, a white guy notable as the first DC hero to experience white guilt.

But none of these characters led their own book, the way the new Ms. Marvel will. Anyone rooting for this series to be great should take Wilson’s involvement as a good sign — she’s an acclaimed writer of comics and prose whose credits include the great Vertigo series Air and 2010’s The Butterfly Mosque, a memoir about her own conversion to Islam after moving from Boston to Cairo in the mid-’00s. Whether it’ll find an audience is a different question. The issue isn’t so much that it’s a book with a Muslim lead, but that it’s a book about a female character without roots in a franchise book on the X-Men/Avengers axis, historically not the easiest sell.

The case of the original Ms. Marvel is probably instructive here. Carol Danvers was introduced in 1977 as part of an ongoing effort to draw in female readers and diversify Marvel’s roster of heroes. (Check out Sean Howe’s Marvel Comics: The Untold Story for some details of how that effort was initially received in Marvel’s boys-club bullpen.) For a while, her adventures were written by Uncanny X-Men scribe Chris Claremont, whose work defined (for both good and ill) the Strong Female Character archetype in a pre–Joss Whedon world. Then her book was canceled. After that, she kicked around the Marvel Universe for decades. She figured prominently in a jaw-droppingly bizarre 1980 Avengers story featuring one of the most sexist plot twists of all time. She lost her powers and her memory, was experimented on by aliens, battled alcoholism, and — at what’s probably her lowest point — took a job in magazine publishing, becoming an editor at Rolling Stone. She has had her own ongoing series four times, and it’s only in the last year or so — thanks to writer Kelly Sue DeConnick’s reimagining of the character in Captain Marvel — that she’s become a much-cosplayed fan favorite and an A-list Marvel superhero. Kamala Khan may have to fight a lot of porcupines before she makes it there, but for now it’s pretty cool that she exists.

Samuel L. Jackson and Michael Caine Will Star in Harry and the Butler