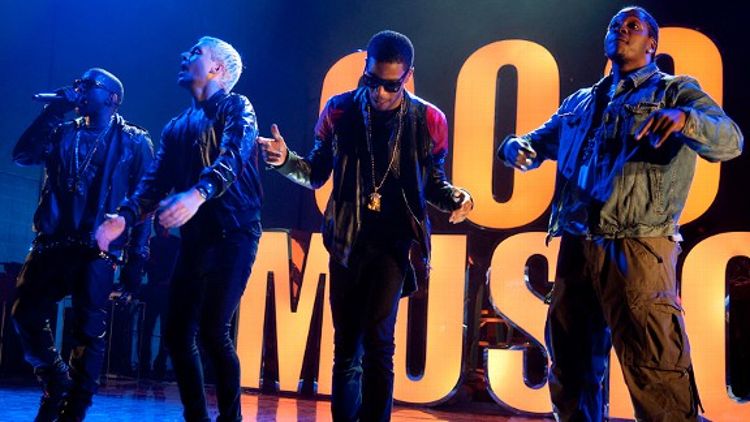 The rap crew is evolving. Historically, it’s been a conglomeration of artists, based around one star, and calling one geographical region home. Basically: Once the star would get on, the next logical step would be to put on all his boys from the neighborhood. This wasn’t always the best idea, of course; just because you grew up with a famous rapper does not necessarily mean that you, too, should be a famous rapper. That meant crew albums could be wildly uneven releases, with the star’s material flooded by inferior product from kids with whom he used to play dodgeball. For the conscientious rap fan, extended crew members could be objects of derision and mockery. A comically derogatory term was coined to connote those nepotism rappers: weed carriers.

But now things are changing. As the New York Times pointed out earlier this year, Rick Ross’s Maybach Music Group delineates the two approaches. After trotting out a neighborhood crew, Triple C’s, to little acclaim, Ross switched gears and built a crew by plucking talent like Wale and Meek Mill willy-nilly, regardless of their neighborhood, or even genre, affiliation. Kanye West has been doing the same thing for a while with G.O.O.D. Music, putting together a roster that manages to accommodate everyone from Virginia crack-rap legend Pusha-T to pale British troubadour Mr. Hudson. Elsewhere, Lil Wayne’s Young Money might be the most successful example of the new model. After coming up in a classic neighborhood crew, New Orleans’ Cash Money Millionaires, Wayne looked far and wide, to Toronto and Queens, while building his own crew, and managed to sign current superstars Drake and Nicki Minaj.

It fundamentally makes more sense, quality-control wise, to expand your talent pool outside your immediate surroundings. But as the neighborhood rap crew fades away, we can’t help but feel a bit wistful. Sure, their overall track record might be spotty, but neighborhood rap crews have churned out some classic music over the years. Plus, there’ll always be something to be said for their insular local bonds, something the new school patchworks just can not re-create. Also: If rap crews are now going to be meticulously crafted mercenary units, which crew member are we supposed to make fun of?! The neighborhood rap crew isn’t dead (God bless new iterations like Harlem’s ASAP crew and Los Angeles’ Odd Future), but it might be fading. Before it does, Grantland looks back at a few of our favorites.

Amos Barshad: Ghostface Killah’s Theodore Unit is an afterthought in the great man’s career. His Staten Island crew never had much name recognition; even hard-core Wu-Tang aficionados might be hard pressed to tick off more than a member. But look back closely at the last seven or eight years of Ghost’s discography, and it’s hard to deny the warm, inviting — and, at times, brilliant — presence of Theodore Unit.

Their big moment came on 718, a 2004 crew album cobbled together from Pretty Toney Album leftovers that demolished all lowered expectations. Highlights are plentiful: “Punch In Punch Out,” whose slithery beat and indignant shit-talking — courtesy Trife da God, Ghost’s unofficial right-hand man — is going to be perfect as the soundtrack to the intro credit roll on the direct-to-home-video gangster movie I will one day direct. “Be My Girl,” featuring Solomon Childs crushing a lovesick Dramatics sample. “Gatz,” an experimental word-for-word re-telling of The Great Gatsby a gun-talk number in which token white guy Sean Wigs confusingly boasts of Theodore Unit as “the new Sammy Sosas.”

They never got another album all to themselves. But they kept on popping up on Ghost’s solo stuff, adding a touch of humor, or a shade of introspection — whatever it took to enhance the material. On More Fish’s “Pokerface,” Wigs turns in a wholeheartedly crappy impersonation of Matt Damon’s Rounders character. On “Dogs of War,” Sun God — Ghost’s actual son — gives his pops the opportunity to explain some progressive child-rearing techniques: “This is family, nigga, niggas can’t stand me / Next up, my little man, I hand you the jammy.” And Trife, for his part, from “Biscuits” to “Cocaine Trafficking” (“moving bricks like I got a degree in scaffolding”?!!) just seems to bring out the best in GFK.

I don’t know what the deal with Theodore Unit is these days. Outside of a Trife verse, they were a nonentity on Ghost’s 2010 solo album, Apollo Kids. But we always knew their subtle reign couldn’t last forever. When I think back, then, I’d like to remember them as they were on the cover of 718: delightfully mean-mugging, brandishing baseball bats, rocking awesome T.U. varsity jackets. Yeah, they weren’t rife with talent or innovation. But they were Ghost’s boys, and they did their damn job.

Rafe Bartholomew: I had to dig through shoe boxes full of old cassettes to find my tape of the Lost Boyz’ 1996 debut album Legal Drug Money. My mission: to find verses on said album that weren’t rapped by Mr. Cheeks. With all due respect to Freaky Tah (R.I.P.), Spigg Nice, and Pretty Lou, those verses do exist. Finding them just ain’t easy. The most popular song I could find that wasn’t all Cheeks was “The Yearn,” an earnest, safe-sex advocacy song in the mold of Domino’s “Raincoat” or the Ghostface verse in Wu-Tang’s “Tearz.” Freaky Tah gets a verse on that track, but look at any of the other hits from this album — “Renee,” “Lifestyles of the Rich and Shameless,” “Jeeps, Lex Coups, Bimaz & Benz,” “Music Makes Me High” — and the other three Lost Boyz don’t do much more than hoot and holler during the hooks. Pretty Lou even has a Yahoo! Answers page devoted to him: What did Pretty Lou do in Lost Boyz? Your guess is as good as mine.

Chris Ryan: If Rah Digga would have asked me, I would have told her, “Listen, Harriet Thugman, you might very well be the best female MC of your generation. But you could look like Naomi Campbell and rap like Rakim, you were never gonna get any shine. Not while the swinging dreads of Busta Rhymes were blocking out all your light.”

Memories run short in rap music, so it’s easy to forget that Busta was basically the beating heart of hip-hop for about five years.

On the surface, Flipmode, which Busta constructed as a kind of support group after he left Leaders of the New School, was your typical megawatt star with dimmer bulbs surrounding him. But that’s the Spliff Star Effect. It’s an unfortunate association, but whenever you think of the crew you think of Spliff, dabbing Busta’s brow and twerking behind him in videos. That’s a real shame. Sure, the primary job of any crew member was to make Bus seem like the center of the known universe, but Flipmode was a broad church, and it held a lot of talent in its pews.

Some of the names from the crew’s alumni roll read like they walked right off the set of a Danish remake of House Party (Lonny Bereal, DJ Serge Monstracity) but you’ll also see some seriously serious MCs in the mix: Roc Marciano, Baby Sham, Lord Have Mercy, and the First Lady of party and bullshit, Rah Digga.

I suppose Flipmode still exists, as Wikipedia informs me that N.O.R.E. is now a member, which I find incredibly difficult to believe. But for me there is only one Flipmode. And, despite some great, great tracks that feature one or more members of the Squad (“The Heist,” half of the group album The Imperial), there is really only one Flipmode song that someone needs to hear in order to truly appreciate their frying-pan-to-the-face glory.

This is “Take That” from Da Beatminerz’ Brace 4 Impak album. The order goes: Rampage (!), Sham, Roc Marc, a Spliff Star sonnet in the middle, a Rah Digga verse that shouts out Tiger Woods and a Busta anchor that is big, gigantic, oversize, and more or less bladow. There are moments, when the ratio of volume, bass, and beer is right, where I am fairly convinced that this might be the best rap song of all time. We can sit here all day and knock Spliff Star. But he was on “Take That” and you weren’t.

Rembert Browne: If there were a Last Supper painting for Atlanta hip-hop, Kilo Ali would be flanked by his twelve Rapostles, known to the world as Dungeon Family.

These aren’t the only members of Dungeon Family. Like any good neighborhood-based rap collective, there is no way to accurately quantify how many people are in Dungeon Family. Sure, attempts have been made to categorize the members, but there is no way they will get everyone. The guy who worked at the package store on Big Boi’s corner is sort of in Dungeon Family. So is the lady that worked at Foot Locker and the cashier at the fish place across from the train station. This may sound like nonsense, but considering the fact that my first cousin actually has ties to Dungeon Family, you should probably just listen to what I have to say. Fantastic.

In the November 2011 “Survivors” issue of GQ, Dungeon Family is profiled and Cee-Lo breaks down how far back these late-30/early-40-year-olds go. Various members going to nursery and grade school together, life-changing chance encounters at the mall, family members living across the street from one another; that is the foundation of Dungeon Family. While I respect hip-hop collectives that operate more as a sports franchise, acquiring the hottest flavor of the week, regardless of origin, there’s nothing quite like watching a group who grew up together all find some form of success, be it individually (2003’s “Hey Ya!”) or as a unit (2001’s Even in Darkness). While some have achieved a higher level of success than others, the beauty with the crew that officially made the South “dirty” is that they’ve been taking turns letting each other have the spotlight (even if, for some, it’s only a week) for almost 20 years. In the upcoming years, I’m excited to see if lesser-known members of the newer homegrown crews like Odd Future and the A$AP kids can prove worthy/are allowed to get their moment, or if they’ll simply remain Tyler and Rocky’s hype men. We shall see.