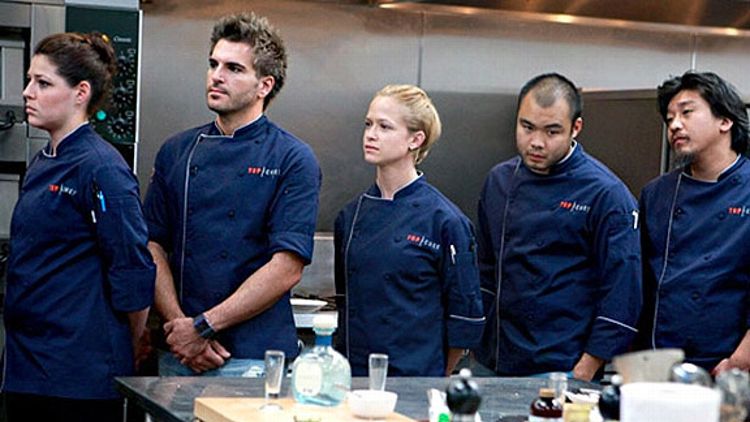 The past few years have been tough, and so it makes sense that we have sought comfort in adult footed pajamas, bacon, butter, and remaining in our romantic relationships even when the box has been open so long that they’re as stale as cardboard nuggets. It makes sense that, over a period of time when many of us have lost our jobs and residences, we seek ways to self-parent by wrapping ourselves up in Snuggies and devoting grandma-like brain space to what will make up our three squares a day. The connection between food and emotion is complex, covering all sorts of ground from vitamin deficiencies to sense-activated memory: Even thinking about comfort food is enough to combat loneliness. Is that why we watch so many cooking shows?

Competitive cooking is a strange thing to watch. Although — as hosts remind contestants millions of dreary times per episode — a diner first eats with his or her eyes (chilling imagery for the literal-minded!), no matter how much food TV we watch, we can never taste the product. Viewing competitive sports is something else entirely: The vantage point of an at-home fan, especially one with a replay button to push as many times as he or she wants to, is close to omniscient. But how can a person experience a platter of fried chicken just by looking at it? When one of the Top Chefs presents an impressively high soufflé to Tom Colicchio, a soufflé that — cruelly — we will never taste, what kind of satisfaction do we obtain from watching the judges eat, and then rate, this dish? Most of these shows, the nighttime Food Network variety (The Next Food Network Star, Chopped, Dinner: Impossible, Iron Chef America, etc.) and the Bravo and network offerings (Top Chef, Hell’s Kitchen, Masterchef), aren’t geared toward cooks so much as they are geared toward foodophiles. We aren’t necessarily as interested in learning to replicate the soufflé as we are interested in eating it; even watching someone else eat it will suffice. If we eat with our eyes, the food-show addict’s eyes are very fat indeed, and the more of these shows we take in, the greater investment we have in the chefs who impress us the most.

There is no flavor or fullness to be achieved from watching a Voltaggio brother sous-vide chicken thighs, but certain chefs attain celebrity just by feeding us culinary ideas stamped with what we must assume is their unique skill. The L.A. Times struggled to get a reservation at Top Chef Season 6 winner Michael Voltaggio’s restaurant Ink; Top Chef Masters alum and host of Ludo Bites America Ludo Lefebvre is so elusive, with his pop-up restaurants with mayfly-like lifespans, that his food lives mostly in our imaginations and in the fawning reviews of his foie gras panini. And anyway, who can afford to go to a place like Jose Andres’ The Bazaar more than once in a lifetime? It’s only practical to supplement the tactile and sensory satisfaction of eating well in the proxy servers of our taste buds’ memories, just as the thought of potatoes au gratin means much more than the flavor of cream and carbs: The memory, or imagined experience, of food pleasure is almost as powerful as the real thing.

Celebrity chefs — to those of us who only made it to varsity levels in Scrabble — give an otherwise apathetic demographic a reason to root for players and shout a derisive “COME ON!” at a culinary athlete who skates through the competition without the virtue of being good at cooking: willing them to fail, to keep the integrity of the game intact. A chef’s personality is usually distilled, in the context of these shows, to an ability to persevere when a plate of chopped something-or-others gets accidentally dumped on the floor, and a mythical chef attribute that’s sometimes referred to as “passion on a plate.” If you happen to have eaten at a cheftestant’s restaurant before his or her rise to fame, you can feel almost like a Red Sox fan in the bleachers as you watch him or her struggle to make the risotto tender on time. It’s a relatable struggle: Every home cook sweats it out over a pan of risotto, or wonders why the chicken leg won’t wiggle easily after the carcass has sat in the oven for almost two hours, or tries to get the dinner-party guests drunk enough that time will enter into that fluid space where nobody notices they’re only being served plate after plate of cheese because no entrée will ever make it out before midnight. There are very few B-plots, a lack of focus on inter-chef relationship drama or boring bickering in the rented condo common room, and that’s refreshing. Foodies like integrity, not interpersonal bullshit; why pick apart a person when it’s so much more fun to pick apart a $24 dish of subpar rigatoni? It’s impersonal and refreshing, while at the same time being deeply personal when you consider the huge professional and street-cred repercussions of undercooking a pork chop on TV and then inviting people into your restaurant.

It can be just as engaging to watch the minor league escapades of chefs from your sofa as it is to view the pyrotechnics of Chef Morimoto as he effortlessly hacks a live spiny lobster to death. Chopped, with its relatively modest $10,000 prizes and mostly unknown players, takes place over three anorexically-timed rounds (20 minutes for an appetizer, 30 for entrees and desserts), and involves a basket of mandatory clashing ingredients, like pigs’ feet, kumquats, and marshmallows. It is one of the shows that is arguably better to watch than to judge, especially since its difficulty and the culinary acuity level are so often mismatched. There’s something gratifying about watching someone with a culinary degree get stumped by a chicken in a can, something recognizable in the sweat dripping from a chef’s nose as he or she struggles to make ingredients into a dinner as the time drains away and the deglazing pan overheats. In 2009, Michael Pollan, who takes a pretty dim view of cooking shows (“a simulacrum of home cooking that is sold on TV” — that’s not good, right?), asked a chef friend if he thought that a person could learn to cook by watching these cooking competitions. “How much do you learn about playing basketball by watching the NBA?” was the response. But just like the rituals associated with sports fandom (the tailgates, the familiar musical interludes, the cold drink, the jersey numbers, the history that permeates generations of loyal viewers), the anticipation of our culinary programming is a lot like the anticipation of lunch: comforting in its regularity. We were never meant to taste the things we watch other people eat on television: They’re imagination-stokers and memory triggers. The brain responds more to the anticipation of food than to food itself, and these shows keep us in a constant state of anticipation for a reward that never arrives.

There is a theory that domesticated cats meow (whereas feral cats don’t often meow past maturity) because we keep them in a constant state of kittenhood by providing them with their Fancy Feasts. Perhaps the fuzzy feelings we glean from thinking about comfort food — from providing ourselves with this anticipation-reward game — coddles us in a way that makes us feel as safe as infants. We watch other people get fed, and it’s primal and reminds us of sitting at the table, legs dangling below, drooling over the idea of dad’s famous macaroni. The anticipation keeps us in a kitten state, even when the feasts we prepare for ourselves are anything but fancy. It’s nice to imagine that somewhere, someone is reaching for the second jar of caviar to plop on some televised blini. It reminds us of something we hope we might see again.

Previously: After the Suicide: Understanding The Real Housewives of Beverly Hills
The X Factor: Chris Rene Steps In It
The Recessionary Charms of American Horror Story