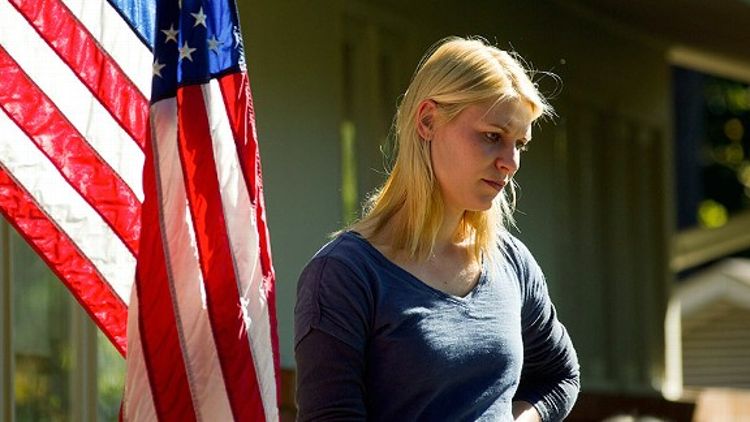 Over a decade and a half after creating an iconic television character on My So-Called Life, Claire Danes has done it again on Homeland. Just hours before we spoke, her performance, as the manic obsessive CIA analyst Carrie Mathison, was nominated for a Golden Globe. In advance of Sunday’s season finale, Danes spoke about bipolarity, the unreality of nunchakus, and how, when you think about it, actors really aren’t all that different from spies.

I’d imagine that you’ve been approached many times in the years since My So-Called Life about returning to television.
I actually haven’t been approached a whole lot for television, believe it or not. But apparently [showrunners] Howard [Gordon] and Alex [Gansa] had me in mind for Carrie at the initial stages of development, which is incredibly flattering and surprising. I certainly would not have seen myself as this crazy dynamo. It was a bit daunting committing to anything for so long, especially when playing a character who is very troubled. But the project was so excellent I had to say yes.

One of the things Homeland has made me realize is just how few female characters on television are allowed to be as complicated as a Tony Soprano or a Don Draper. Carrie Mathison is able to be both a reckless mess and incredibly good at her job.

Click here for all of our interviews with fascinating people from the worlds of sports and pop culture.
Right, she is both of those things. I’ve said this before, but she’s the ultimate unreliable narrator. As her mental stability decreases, so does her aptitude for work. It’s a great premise. I was concerned initially that her bipolar condition might be too gimmicky, but they’ve handled it with a lot of integrity and grace. It’s not just a tacked-on disorder. It really does heighten the suspense.

I was really struck by how integrated her condition was from the beginning — I’m still thinking about that moment in the pilot when Carrie desperately comes on to Saul.
Oh, it was outrageous and horrendous but you find yourself kind of of accepting it, too. The show is full of those amazing surprises.

Can you talk a little bit about the physicality of the performance? That scene with Saul foreshadowed how willing Carrie is to use her body as a tool or weapon to get what she wants …
I thought of that in terms of her condition. Even when you are appropriately medicated there are swings, and when you’re stressed you can spike. People with bipolar disorder have difficulty with boundaries. They’re often promiscuous and abuse alcohol because they self-medicate as a way to decompress. Carrie just has very poor impulse control.

I was curious to hear your take on Carrie’s experience in Iraq. We hear that she was traumatized, but it’s unclear how serious it was.
I don’t really know. But I think the idea was that she had a translator she was very close to — and, knowing Carrie, that means she was probably very close to him — and I think he was caught and brutally murdered, hanged or something, in front of her. I think that was the incident.

It also seems clouded because of her willingness to use such a terrible experience as currency in order to get closer to Brody.
Absolutely. She’ll use anything.

You have real chemistry with Mandy Patinkin.
He’s just brilliant, he really is. I love working with him because he’s incredibly imaginative, alive, and present. I wonder how much our characters’ rapport informs our personal and professional rapport. They really do love each other, and it’s easy for me to extrapolate and love Mandy as well.

Also, my very best friend from the age of 9, her dad — there’s an uncanny resemblance to Mandy. Or maybe it’s the other way around? So there was this immediate, bizarro sense of familiarity. It’s confusing but it works, right? Like Carrie.

Your performance in last week’s episode, “The Vest,” was truly remarkable. Particularly because one really had the sense that we were seeing something that had been bottled up for the previous ten episodes.
I’d been learning about bipolar disorder since last Christmas because I was concerned about playing “crazy” in a generalized, unfocused way. So I talked to a lot of people who have the condition and those who treat it. Actually, I watched a lot of YouTube videos — there’s a surprising amount of material out there, I think, because there are a lot of bipolar people who are up in the middle of the night and have all this energy but nobody to talk to except their computer. I was impressed the writers went for it and really let the snakes out of the can. But it was exhausting. It turns out it’s really, really tiring to be manic. Who would’ve thunk it?

It was fascinating to watch the gradations of your performance because one had the sense toward the end of the episode, as Carrie was beginning to be medicated and come down, that she was annoyed about being put back in the box.
Absolutely. I think there is a point on the continuum before you really start to spin out when you really are thinking better than most people and have insights that are spectacular. I think it’s so touching that Saul is able to make sense of those thoughts for her. It must be torturous to have these glimpses, these revelations that just kind of get punctured and fall flat before they can be made useful.

I love the fact that in the penultimate episode of a thrilling, suspenseful season, the show lingered on Carrie’s condition and the tenderness of Saul’s acceptance of it.
That’s the greatest gift I think anybody’s ever given her because, one, he’s helped her solve the riddle which is her total preoccupation. But two, he accepts her. She’s been hiding this secret for years and years and years and I think she’s terrified she’s going to lose everything. Not only does he embrace her, he celebrates her in that moment and it’s a very profound thing.

But back to what you were saying before, almost every episode I have to sit down and say, “Well, she’s manic here, and kind of in a mixed state here.” It’s a process almost like her color-coded scheme. I have a system like that in my head, like, “What shade of manic do we have today?”

One of the more fascinating themes of the season has been how all of the various pawns in the war on terror have had their lives either ruined or reduced by their obsessions.
I think that job does demand a kind of isolation that can easily lead to deep loneliness. People in the CIA, they marry each other. They’re like actors! We have to travel without much warning to far-flung places and it’s very hard to communicate what our experiences are like to those in the outside world. I haven’t seen many stories that articulate that feeling so well. Counterterrorism isn’t really about the nunchakus, the guns and gadgets. It’s about psychology.

Right, I feel like that’s a more interesting subject in the long run than the identity of the mole in the CIA.
Yeah, I don’t feel like that’s the ultimate question. It’s really not the point at this stage of the show, but I’m sure it will be addressed eventually.

That said, I thought Gordon and Gansa were incredibly brave to rip up so much of the status quo last week. Without spoiling anything, do they keep it up with the finale?
Oh, they’re totally fearless. I’m amazed they’re taking as many risks as they are, going for the jugular over and over again. As for the finale, I actually haven’t seen it so I’ll be watching along with everyone else. It’s longer, I can tell you that. It answers a lot of questions and, like Gremlins, more questions are bred. The ending is pretty … gripping. I’m afraid to say anything else!

Finally, I have to ask: How do you think a grown woman manages to survive on year-old tomato sauce and expired yogurt?
That’s a very good question. I doubt she’s in the best shape. I think Carrie’s more acid than alkaline.

See all The Grantland Q+A