The Maester Learns Dothraki, Week 7: An Educational Trip to the Motherland 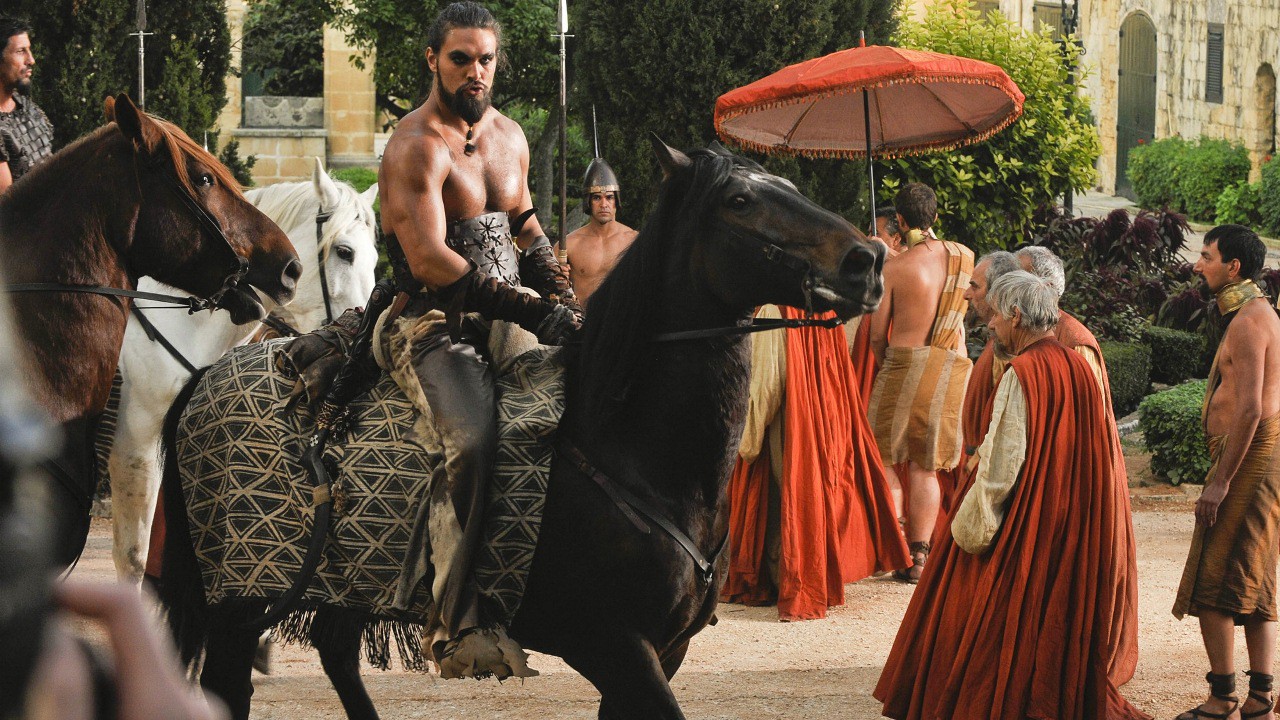 Dusk, the Dothraki Sea, somewhere north of the Painted Mountains.

The sun seems to take forever and an age to set over the dahana of the Dothraki Sea, gathering itself in robes of deep purples and reds before giving way to darkness and the infinite stars. Sitting upon my horse, I shade my eyes to the retreating sun and see a city of tents being raised. It’s a breathtaking scene. The air is thick with the sound of hammers and axes, the whinnying of horses, the murmur and tumult of camp conversation, and the fell and sorrowful wailing of the Lhazareen, whose village our host had recently razed before carrying their women and children away into captivity of the most pitiable kind imaginable. Their cages are just over the next rise. It is so peaceful here.

My father sent me from Pentos to study the Dothraki people, to learn their ways and language, so as to help our Magisters foster a more balanced economic relationship with the horse lords beyond the current “pay them not to kill us and burn our city” arrangement. The khal could not have been more generous in allowing me to stay in his khalasar. He has commanded his people to give me an incredibly old and feeble horse (messih); for a foreigner among the Dothraki, this is considered a sign of great respect, as those who walk are, in their eyes, the lowest of the low.

When I was delivered to the khal’s presence, he looked upon me with a fearsome gaze. Every part of my body quaked. I then presented him with a chest of gold coins and two barrels of wine, the agreed-upon price for my safe harbor with his khalasar, and spoke the message that I had memorized mnemonically.

The khal heard these words and his warlike visage melted as if springtime had opened upon his heart, and he laughed for what seemed like a really, really long time. Everyone in his tent roared along with him. What a scene! I shall not soon forget the way these hardened warriors clapped me upon the shoulders and back (with such force that the bruises are still visible), laughing warmly, and, wiping tears from their eyes, greeted me as if I were one of their long-absent brethren, now returned to the fold.

Then the khal, still laughing, his eyes wet from his exhortations, the bells in his enormous braid jingling, snapped his fingers, and the horse was brought in. He presented me the reins by his very hand, then handed me a special cloak called a shor nhomi,2 which marks me as an important ambassador and acts, effectively, as my passport among the khalasar.

The horse rides easily enough. Once it is roused from its natural stupor, that is. This requires me to strike the animal quite hard upon its head with a decent-size stick (a kerikh) whilst screaming “Havolat!” 3 which is apparently the beast’s name. Once Havolat is awoken, several more strikes upon his rump, coupled with vigorous kicks to the ribs, are required to start him moving forward. I frequently find myself quite exhausted just from this usually simple process of prodding a horse to motion.

Also, and quite unfortunately, Havolat has terrible breath. Just ghastly. In truth, the humors emitted from the front of the animal are worse than those that issue from its rear. I noticed this about the animal — I could not help it, quite honestly — that first day in the khal’s tent, but, of course, protocol requires that I not register this in his presence (even though many of his warriors were not so decorous and openly pinched their nostrils at the stench, which is crazy because these guys smell dead bodies all the time). Because, again, this is a great, great honor.

That being said, the smell makes riding Havolat quite difficult at times, depending on which direction the winds are blowing. Of late, I have taken to breathing through a Myrish scarf that I press over my mouth and nose and in which I have wrapped a large number of orange peels. This softens the general aroma. Somewhat. Unless a direct blast of the animal’s exhalation wafts up to me, in which case, the foulness of its fetid maw has not had a chance to disperse into the air and is simply too powerful to be withstood. I have lost count of how many times I have become sick, evacuating the contents of my stomach upon the beast’s neck as the khal’s warriors point and jape in their guttural speech. Even now, in the deepening gloom of twilight, I can see a few dried flecks of vomitus on the beast’s grayed, decaying mane, crusted upon his mottled, wormy skin, and suddenly the scent of horse meat grilling from numerous the cookfi—

Nightime, in my tent.

I became ill once again, unfortunately. The Dothraki, of course, find this quite hilarious, and whenever they see me approach, they grab their washboard bellies (incredibly ripped, these horse warriors are; amazing core strength) in mock agony, and, after feigning shudders of nausea, double over while making vomiting noises. Sometimes, one warrior will do the play-act vomiting while another warrior spills water out of a carrying bladder behind him and, if the angle is just right, it really does look like the first guy is throwing up. It is as if I am one of them — their little brother.

Each evening, I have been learning the Dothraki language from a teacher and translator, provided to me by the khal, by the name of Rago. It has been slow-going, but I feel myself making progress. I am already adept at introducing myself to the natives here using the phrase Anhi jin ma athzhikhar,4 which means, I am told, “Greetings, fine warrior. I am an honored ambassador from Pentos, living and learning among your kind, and under the personal protection of the great khal. I look forward to becoming the bridge that forever links our two peoples in peace and prosperity.”

I marveled to Rago that the Dothraki language was capable of expressing so much with such an economy of words. He assured me that this was the case. Whenever we have our lessons, warriors crowd around to watch. Sometimes, they will ask Rago to have me repeat some Dothraki word or phrase that I do not yet recognize, and, having repeated what Rago asks, the warriors will erupt in laughter and merriment. Then they turn to each other in amazement at the words that I have just said, some of them crying, such is their enjoyment. When I ask Rago what I just said, he tells me not to worry about it, it’s a very complicated concept, and, anyway, the warriors just want to check my pronunciation. What a wonderful people!

I am learning much about these supposedly savage brutes. There is a genuine warmth and kindness to them, once you get past the wanton rapine and pillaging of cities and villages large and small and the mass enslavements and the desolation that remains in their wake.

But now I must sleep. I have thrown open the flap of my tent so the sea of stars might shine in. The wailing of the Lhazareen has abated and I can hear Havolat, grazing gently nearby. The susurrus of the wind through the tall grass is soothing. I wrap the fresh orange peels in the scarf and tie the scarf around my face and take my rest.

Filed Under: Game of Thrones, The Maester Learns Dothraki, HBO