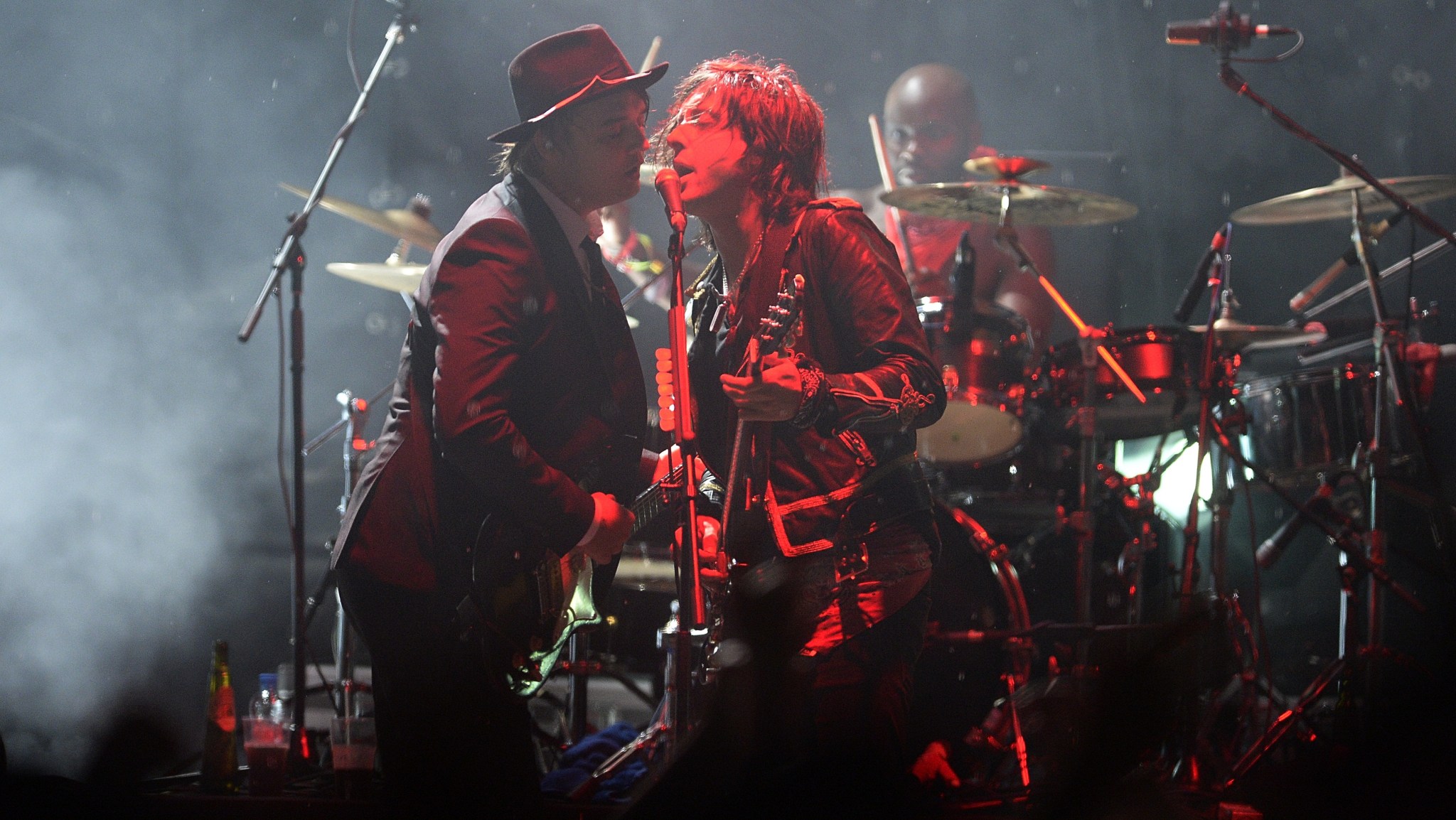 For all of its freewheeling spirit, rock-and-roll music is actually a pretty codified thing. Long ago, earthbound gods put down templates, and everyone has been reacting ever since. That means that in 2015, rock-and-roll music is a big, big tent; we now embrace all manner of digressors and deviants and meta-performance artists and art-school sellouts. But on some level, if we’re being honest, we do still want some of that same old thing: druggy preeners leering at us, cockeyed, from behind guitars.

Herewith, America, I give you … the return of the Libertines.

… you are laughing at me right now. In the U.K., the Libertines are megastars, and their comeback has already been properly sweated over; they’re spending their summer taking over the country’s massive festivals, Glastonbury and Reading and Leeds. But assuming you’re not …

… this might be the right time to have a quick conversation. Basically, what I’m saying is this: Hello, America. Here’s why you should care that the Libertines are back.

In the United States, guitar rock is in a comatose state and nobody minds. Arcade Fire ended up wearing its stadium status like chain mail; the Black Keys are 100 percent, pure, un-stepped-on boredom. Guitar rock is comatose. In the U.K., things are dire, too, but with one major exception: While we Americans may one day truly let it wither from our sights forever, the British — instigators of, you know, the British Invasion, and so forever tortured in their role as guitar rock’s modern custodians — will never stop caring.

That’s best distilled in the editorial policies of the NME. Long ago, the long-running, workmanlike music tabloid earned itself a kind of cheeky reputation: It loved itself a good hype storm. Dangle a decently scruffed-up lad-rock band near its teeth, and it would almost certainly chomp. It was as comical as it was inevitable as it was wonderful. Did the NME need to lose its shit every time another pack of pale, bedheaded men in tight trousers appeared? No, it certainly did not. But if we were going to be rational about this whole thing, we would have all become teachers of maths. Please: Let the NME freak out in peace.

When the Libertines appeared in the early 2000s, they were tailor-made for the NME audience. Pete Doherty and Carl Barât, the band’s tangled dual frontmen, had the rock-and-roll playbook and were gleeful in spilling scuzzy, day-old champagne all over it. They were caustically, offhandedly witty, irrepressibly and accidentally and preternaturally so — “clever” as both a founding principle and a defense mechanism. The only thing more rumpled than their clothes were their soft-packs. They dated supermodels like Kate Moss. They did enough heroin to kill a small horse.

It was the Lennon-McCartney Partnership Model, plus intravenous drug use and a soupçon of a hint of a physical relationship. Complicatedly, they loved each other.

Most importantly, they had jams.

In a tumultuous half-decade, they managed two albums — 2002’s Up the Bracket and 2004’s The Libertines — jumbled full of slurred, punky, thrillingly British rock music. And, thanks in equal measure to their nefarious extracurriculars, they managed a legacy.

In 2003, in a defining sequence of events, Barât chucked Doherty out of the band, swearing that he was out until he cleaned up his drug use; in response, Doherty burgled Barât’s apartment, making off with an antique guitar, books, and one mouth organ. Doherty spent a few months in Wandsworth prison, eventually walking off the yards to be greeted by Barât himself. That night in Kent, at the Tap’n’Tin pub, the Libertines happily, haphazardly reunited.

They’d keep on coming together and falling apart, coming together and falling apart. Even as they went off and formed their own acts — Doherty with Babyshambles, Barât with Dirty Pretty Things — they were tethered. The drug use wasn’t romanticized, not really; it was very much at the center of why things never could work out. It was only appropriate that “Can’t Stand Me Now” — one of their best songs and biggest hits — was about their addled, always-crumbling relationship.

“An ending fitting for the start,” Barât kicks off, “you twist and tore our love apart.”

“No, you’ve got it the wrong way around,” Doherty slings back, warmly, “you shut me up and blamed it on the brown.”

“Gunga Din,” their first new release in the 11 years since official disbandment,1 mines similar territory. Inspired by — pardon, I just need to quickly drape myself in a giant Union Jack while typing this — a Rudyard Kipling poem about a relationship between a soldier and a water bearer in India before the fall of the British empire, the track tells of a twinned life of regrets. “You’ve been beat and afraid / Probably betrayed,” Doherty and Barât sing together. “You’re a better man than I.”

Whenever a band reunites, you’ve got to consider the obvious: the cash grab. Earlier this week I happened to speak to an editor who was at the NME in the mid-2000s. He laughed off that proper nice chorus on “Gunga Din” — the bridge sounds like a Libertines song, he said. The chorus is the sound of them realizing they’d never made as much money as they’d liked.

Frankly, though: I love it. And I can’t help but think good thoughts. In the early 2000s, the Libertines made two great albums, then fell apart. And there’s no particular reason their third — called, with perhaps more sincerity than not, Anthems for Doomed Youth, and out September 4 — can’t be great, too. Even that NME editor, a grizzled veteran of the Brit guitar-rock hype wars, had to admit: He hasn’t been able to stop spinning “Gunga Din.”

In recounting the recording of the album in Bang Saray, Thailand, the band has gamely provided the kind of fodder one would expect out of this kind of joyously ramshackle outfit. Supposedly the studio, Karma Sound, was built above an old snake pit that still contained some vipers. According to Barât: “The snake god Naga had a shrine. You could still find snakes there. I said to the guy there: ‘Do you have anti-venom for the snakes?’ He said: ‘No, if snake bites you, you die.’” Also: On at least one track, the band “decided that what the song really needed was the sound of an engine revving, so [they] wheeled [a scooter] into the studio to record it.”

Maybe this is all a put-on by a band that knows to play their role. Certainly, it could just as well fall apart again: The whole reason they re-formed in Thailand was because Doherty was there wrapping up his latest stint in rehab.

But if you watched them smirk their way through their surprise appearance at Glastonbury, maybe you don’t care: Maybe they’re playing the part; maybe they truly are the rock-and-roll rakes the world needs now.

At the end of the set — after they’d huddled close enough on the microphone, again and again, to have spittle fly from one mouth to the other — Doherty ended up on his back, strumming his guitar. Barât leaped down, planted a palm on his cheek, possibly whispered something in his ear, and embraced him.

Then Barât, as you knew he would, pulled Doherty back up.