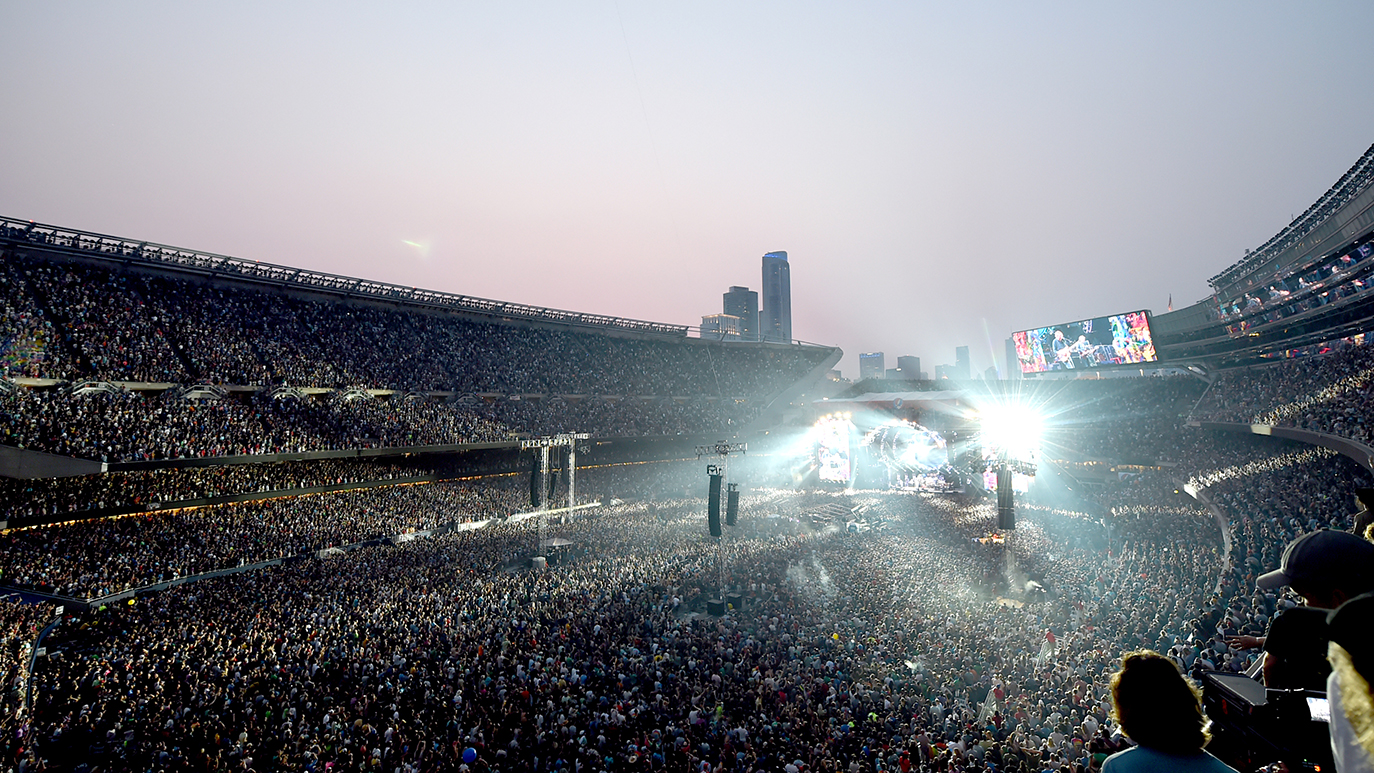 The Grateful Dead’s run of #Dead50 anniversary concerts last week began with a subtle semantic maneuver. For the first 30 years of the venerable jam band’s existence, from 1965 to 1995, it was one of the most active rock groups in the world — hardly a year passed when the Dead wasn’t on the road, and all of those gigs were documented for posterity and subsequently catalogued and analyzed by fans. After Jerry Garcia’s death in 1995, however, the Dead evolved into a merchandising company periodically promoted via live events staged by its surviving board members. It’s perhaps more accurate to suggest that the Grateful Dead has been a brand for 50 years. The members spent three decades building a legacy, and then two decades maintaining, promoting, and monetizing it.

Restless creativity and perpetual forward movement, no matter the collateral damage, marked the Dead’s “working band” period. Garcia’s death at the age of 53 has somewhat overshadowed the four dead keyboardists the band left in its wake. Most recent is Vince Welnick, who played with the Dead during Garcia’s final years in the early ’90s. Welnick killed himself in 2006 by slitting his own throat, in part, according to journalist David Browne’s recent book So Many Roads: The Life and Times of the Grateful Dead, because he was depressed over not being included in any of the Dead reunion projects. No matter the nostalgia inherent to the Dead’s appeal, the members have been coldly unsentimental about tragedies that might’ve ended most bands.

The Dead’s current “reflective” era, like many sequels, has in some ways been bigger and more profitable — these five shows could be worth more than $150 million in total revenue. But it’s propelled by centrifugal force. Just as Jurassic World exists only in the context of Jurassic Park — it’s more about celebrating the past than continuing a story — the Dead has spent 20 years servicing a fan base that can’t (or won’t) stop reliving the band’s glory years.

The anniversary concerts in Santa Clara and Chicago culminated this reflective era. For a band known for standing onstage in flannel and sandals, the Dead are secret showmen with a flair for the grandest of spectacles. Packing two stadiums over five nights — and drawing a sizable online audience via live webcasts — without Jerry Garcia was part of a process that began way back in 1996 with the launch of the Furthur Festival, which featured Bob Weir’s new band, Ratdog, as well as Mickey Hart’s group, Mystery Box.

Over time, Dead fans were conditioned to accept the band’s music without Garcia. In 1998, the remaining Dead (save drummer Bill Kreutzmann, who was temporarily retired in Hawaii) toured as the Other Ones, a sort of non-reunion reunion. The next year, Phil Lesh launched Phil Lesh and Friends, an all-star band with a revolving cast of other other ones that became a popular touring attraction by faithfully playing old Dead standards. (For the first several years of Ratdog, Weir refused to perform songs by his former band, though he eventually relented.) In 2003, the members reconvened for another tour, this time billed simply as the Dead, which was followed by another tour in 2004 with Gov’t Mule’s Warren Haynes subbing as lead guitarist. In 2008, the Dead played a series of shows in support of Barack Obama, again with Haynes. Then, in 2009, Weir and Lesh formed Furthur with guitarist John Kadlecik, who had previously played the Jerry Garcia role in Dark Star Orchestra.1

In 2014, Weir and Lesh announced they were disbanding Furthur as part of the ramp-up for the 50th anniversary. Why continue with a Dead tribute band when you’re re-forming the ultimate Dead tribute act?

I watched all five Dead 50 shows, which took place June 27 and 28 at Levi’s Stadium in Santa Clara, and Friday through Sunday at Soldier Field. Overall, I liked the run a lot more than I thought I would. How I watched surely helped: While I initially considered traveling to Chicago, my inner Lindsay Weir was persuaded to watch the online webcast from the comfort of home, where the beer is already paid for and there’s almost never a wait for the bathroom. (Reading horror stories about massive price gouging at local hotels and from ticket brokers alleviated any lingering FOMO feelings.) As for the band itself, the Dead sounded appreciably more focused after the Santa Clara gigs, which seemingly doubled as public rehearsals.

From the beginning, the so-called “core four” — Weir, Lesh, Kreutzmann, and Hart — locked with apparent ease into that distinctive Grateful Dead mosey, which synthesizes 12-bar blues and narcotized rockabilly rhythms into a surly, meditative rumble. Weir remains an utterly unique and totally mystifying guitar player, eccentrically plunking away while Lesh’s woolly bass lines snake above and below him. At times, particularly during the Santa Clara gigs, the Dead was downright incoherent, though even that sometimes worked, like on a shambolic rendition of “He’s Gone” from Santa Clara’s second night that concluded with Weir’s surprisingly soulful scat singing. Incoherence has always been part of the true Dead experience.

But mostly I found myself drawn to the ancillary players, including keyboardist Jeff Chimenti, whose organ fills added warmth to even the most sideways jams; pianist Bruce Hornsby, easily the best singer onstage, who nailed Garcia-sung tracks like “Loser” and “Brown-Eyed Women” by affecting a slight haggard drawl in his choirboy tenor; and guitarist Trey Anastasio, stuck with the thankless task of living up to Garcia’s playing on epics like “Terrapin Station” and the “Scarlet Begonias”/“Fire on the Mountain” medley, availing himself commendably in the process.

The addition of Anastasio and the subsequent griping from many Deadheads laid bare some deep-rooted internecine conflicts in the jam-band community. Among laypeople — who, like my poor wife, can’t stand the Dead or Phish and winced at the ridiculously (and thrillingly!) wanky guitar solos blaring from my laptop — it’s assumed that Phish basically replaced the Grateful Dead for the band’s fan base after Garcia died. In reality, there has long been a divide between Deadheads and Phish phans that’s partly generational (Phish will probably always be viewed by some as the Dead’s annoying little brother) and partly reflective of real stylistic differences between the groups. While the Dead is generally laid-back and rooted in blues, country, and jazz, Phish is more manic and influenced by prog, AOR, and funk.

After he was criticized by some fans for holding back at the Santa Clara shows, Anastasio stepped out at the July 3 gig, setting the tone early with an explosive solo on “Jack Straw” and subsequently blazing through both sets. Anastasio’s playing isn’t a natural fit for the Dead — he’s more supercharged than Garcia — but the infusion of energy was desperately needed after two nights of wayward wandering. During the SportsCenter-like post-concert recap show on the webcast, CNBC’s Steve Liesman addressed concerns with Sirius’s David Gans and Gary Lambert2 about whether Anastasio “fit in,” and everyone agreed that he finally made a home in the Grateful Dead’s house, perhaps quelling a simmering civil war among jam-band fans in the process.

The July 4 and 5 shows felt a little anticlimactic after the triumph of the July 3 show. Weird setlist choices abounded in the final two nights. July 4 leaned heavily on an all-American theme, which necessitated the inclusion of a clunker like “Liberty” and an endless cover of “Little Red Rooster.” July 5 was more elegiac and often ponderous — songs like “Unbroken Chain” and an affecting, ravaged “Days Between” were appropriate for the occasion, though I’m guessing they played better at home than at Soldier Field. The puckish defiance of “Not Fade Away” and the lovely mess that was the unexpected “Touch of Grey” encore worked as more conventional crowd-pleasers.

In the promotional lead-up to Dead 50, the media did its de rigueur reassessment of the Grateful Dead’s legacy. While some stuck with tried-and-true stereotypes, there was also burgeoning respect for the Dead’s influence on the music industry. An excellent Wired story by Jesse Jarnow detailed the Dead’s many technological innovations, from how the legendary “Wall of Sound” revolutionized in-concert audio in the mid-’70s, to the early embrace of the Internet by Deadheads, to the way the Dead’s focus on free tape-trading (as opposed to recorded music distributed by corporate record labels) essentially predicted the future of the music business decades in advance.

The concert industry as it exists in 2015 increasingly resembles the world that the Grateful Dead and its followers have fostered for the past half-century. Browne’s book astutely connects the Dead’s early involvement as the house band for Ken Kesey’s acid tests with EDM festivals, which are “both focused on waves of sound and delirium” rather than a traditional artist-audience binary. Even rock-oriented festivals like Coachella and Bonnaroo sell out now without announcing any headliners — it’s the communal experience that matters more and more above the traditional celebrity-driven narratives of the diminished record business. For fans like myself, who opted for a “couch tour” rather than an in-person experience, a big part of enjoying the show was surveying the reactions on social media, the 21st-century version of hanging out amid the Dead’s raging parking lot scenes of old.

The Grateful Dead is now looking toward a future when the Dead can exist without the Dead. All it takes is another semantic maneuver, this time with the word “final.” Perhaps this configuration of musicians won’t play together again. But Lesh already has shows booked for the fall. Surely Ratdog will be back on the road soon. And there are the legions of Garcia wannabes toiling away in tribute bands. There was no need for a pricey Jerry hologram at the anniversary concerts after all. He’s already being projected all over the place.