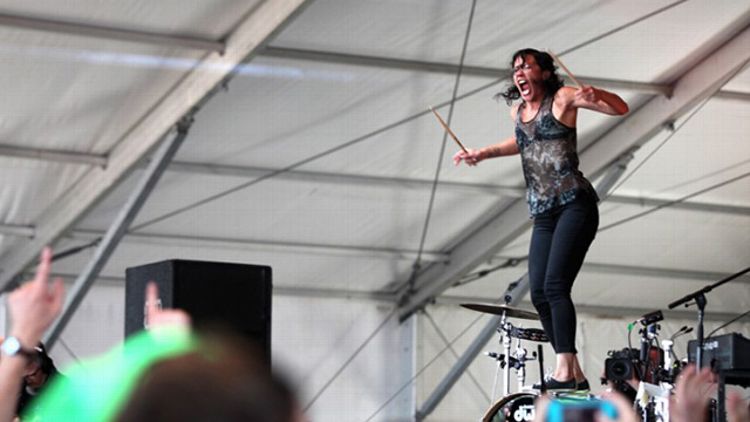 Seeing Paul McCartney live can actually be kind of a numbing experience: Dude just has so many stone-cold classics that there’s not much space for gradual crescendo-building. “All right, ‘Hey Jude,’ what a beautiful, timeless marvel … hey, ‘Blackbird,’ another searingly evocative masterpiece … wow, ‘Yesterday,’ now I’m weeping and thinking about when my dog died,” etc. etc. All in all a good problem to have, plus Paul dropped all manner of solid dad stories on us in between to break up the hit parade. “Back in the U.S.S.R.,” in particular, brought out the banter: He told us about playing a show in Russia, and having the Russian defense minister tell him how the first record he bought was “Love Me Do,” and about how another government dude said he learned English from Beatles records (Specifically, “Hello, Goodbye”). He yelled out, “Yeah, man, free Pussy Riot,” but that may well have been just because he wanted to say pussy in public. Also, after “Day Tripper,” he declared that we were gonna get “high on life,” because wink wink, right, kids? Who wants cheese on their burgers?

Most importantly: He set off goddamn fireworks during “Live and Let Die,” and that shit was baller.

A Dissenting Opinion on Paul McCartney

David Cross did a set in the Comedy Tent the day after McCartney’s performance, and offered an impromptu show review: “The band was amazing but those fireworks are like the things you get on the road in South Carolina for 25 bucks. It’s like he pulled over and thought, Oh, yeah, Ruby Red Sparklers. The guy makes a million dollars every eight seconds. Just thinking about a meal he had — That was a bit more toast than I wanted — that’s a million dollars. He should be loading up sharks with the finest Chinese helicopters and dropping them from fireworks.” Then Cross told a story about messing with the fog machine for “Edward Von Sharpington and His Magneto Getaways or whatever … Edward Shadow and the Heavy Spaghetti and the Magic Beans.”

Next to the staid, dependable rock-and-roll offerings of Macca and Sunday night’s closing act, Tom Petty, R. Kelly, who headlined Saturday, might have seemed like an odd choice. But it was actually perfect counter-programming, and I’m sure he made more than a few real-talk converts out of moe. fans this weekend; what’s more, he was surprisingly in sync with the narcotics-enthusiast crowd. I mean, you don’t need drugs to enjoy the man’s vocal histrionics and deep, rich catalogue of hits (I bet you’ve forgotten exactly how good “I’m a Flirt” is. Go ahead. Give it a listen. We’ll wait). But say you had just chomped down on a handful of mushrooms washed down with a few slugs of lukewarm Milwaukee’s Best: Well, then, you were in the right place, my friend. By the end of the set, when Kellz was crooning “I Believe I Can Fly” with an entire white-clad gospel choir behind him and releasing flock after flock of plastic doves into the stratosphere, what could you have possibly rather been tripping balls to?

Later the same night, Chad Hugo followed up his Superjam appearance by taking over the Silent Disco Tent with his DJ partner Daniel Biltmore (with their powers combined, they are MSSL CMMND). They spun past four in the morning, with Hugo trailing out mini-strings of Neptunes classics (at one point going from “Excuse Me Miss” to “I Just Wanna Love U” to “Senorita”) and Biltmore holding up his end with a little help from the best of peak-era Juvenile. It was a funny scene, the audience featuring both nerds in Tevas and “Dance Masters of Bluegrass” long-sleeve tees trying to figure out exactly how they’re supposed to dance to this stuff, and this one giant dude who tried to buy drugs off of me (I told him I unfortunately didn’t have any, and pointed out a guy in the crowd who I bet did. The giant agreed with me, and trotted off toward his next target). When I was walking out, Jim James was walking in. He looked ready to fuckin’ dance. 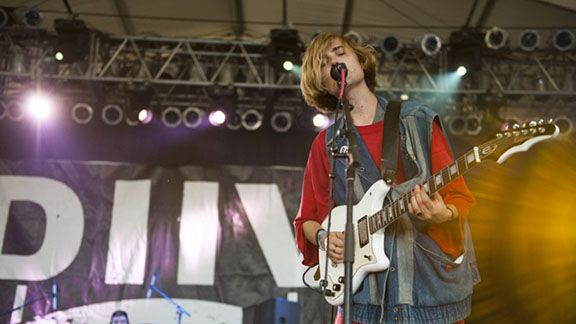 Have you ever been to Bonnaroo, just as a fan?
I have. I came down when I was 18, didn’t sleep for four days, had like the best time of my life. Tried a bunch of new drugs I hadn’t tried before. I think they had a weird effect on me.

That’s what you say?
Yeah, “Who’s got my” and then the drug you want.

Wait, but “boomers”? That means mushrooms?
Yeah, it’s just kind of a hippy jam band [term]. If you’re a person who’s into drugs, you gotta know how to speak jam bands. Sometimes, jam bands will come through New York City. I remember Dark Star came to somewhere in Times Square, and I was just like [snaps fingers] bull’s-eye. You don’t have to buy a ticket. You just hang around outside.

I feel like no one has horror stories about mushrooms …
I feel like people do. Bad trips. I’ve had some dark experiences.

How do you bounce back from something like that?
You just gotta get right back on the horse.

Are there other hippie jam-band terms we should know?
Trees. Here everybody says trees [for weed]. You gotta say trees.

Any advice for any boomer newbies?
You just gotta roll with it. Once it starts rolling, embrace it.

Good buds Kendrick Lamar and A$AP Rocky are both ranking members of hip-hop’s new school, and could at one point be said to have been fairly even as far as jostling for that no. 1 spot. But if Bonnaroo scheduling is any indication, Kendrick’s got Rocky beat right now: While K. Dot played the main stage midday Sunday, the A$AP mob took over one of the tents later that same night. Kendrick, as always, was a rock-solid presence; even his bare-bones lyricism was surprisingly well suited for the real big crowds.

And A$AP, as always, threw a party. Climbing the stage rigs, hopping into the crowd, sweaty and shirtless, Rocky had his people eating out of the palm of his hand. Which means that, toward the end, when he made a request — “I was wondering if all the topless girls would join me onstage” — it was dutifully and enthusiastically complied with. One girl immediately started grinding her butt toward his crotch area; another lamped behind him, surreptitiously taking a selfie. The influx seemed to order, but Rocky wasn’t yet satisfied. Despite all indication that there were, in fact, titties on stage, Rocky wondered out loud, “Ay, man, where the titties at onstage?”

Kacey Musgraves: “I’ve only been here [at Bonnaroo] once and that’s because I snuck in. It was this stage right here. I got to see Nine Inch Nails. But I don’t really remember a lot of it.”

Father John Misty: “Hope you’ve been having a wonderful evening of folk rock zeitgeisty Internet music.” And: “I don’t know how to address an audience this size. I guess I’ll just razzle-dazzle ya.” Also: “[Singing in fake cool-guy voice] ‘Having a real cool time!’ I just made that up right now. Well, we’re gonna play a few more MP3s for you now.”

A brief conversation with Holly Maniatty, a 13-year interpretation professional whose mesmerizing, spirited, full-bodied sign-language techniques could be seen at Nas, Killer Mike, Wu-Tang Clan, and elsewhere throughout the weekend:

But he was psyched to see you signing during his show, right?
Yeah, he was pretty into it, which was exciting.

So how on earth do you manage to interpret for rap shows? Do you prep with the lyrics ahead of time?
Rap music is a specific genre that you have to do a lot of studying for. Specifically, for each artist, you have to know what part of the country they come from, a little bit about their background. You know, because rolling in the streets of L.A. and rolling in the streets of New York are two very different things. I do a lot of reading about the artist beforehand. Killer Mike had a bunch of interviews with Sway on his radio show, talking about his political motivations and why he was doing the really bare-bones show that he does. So that was integrated into the sign choices we were making.

The goal of interpretation is to maintain what they call message integrity. What is the intent of the speaker? He can say 20 words and there are three signs that mean the same thing, or it can be the opposite, three words and there are 20 signs. It’s more important that when a deaf person is watching a concert, that they get the intent of what the artist is trying to say.

I assume, then, that being animated and moving your body is an important part of getting the message across?
It is. It’s a really big part of it, specifically with rap and hip-hop. I researched the Alexander Method of moving your body and making sure you’re expressing rhythm and the beat of what is coming out of the DJ or what is coming out of [the rapper]. Jay-Z and Eminem are famous for doing lots of holds and drops to the beat, and it’s important that at the same time the hearing people hear that, the deaf people see that. That’s why there’s a lot of animation and a lot of movement with the body.

… I assume there was a lot of research?
They were a lot of work. I think like 50 hours of work for them? ‘Cause there’s so many, and they have such a canon of songs, and you didn’t know who was gonna be there. You figure Ghostface Killa’s gonna be there, Method Man, but then you’re not sure … and specifically because they’ve been writing music for so long, when did they write that song? What was going on during that time? Some of their work references the Rodney King beating. You have to make sure that whatever you’re referencing goes with the era that they wrote the song in.

I assume they didn’t have a set list that you could check out ahead of time?
Nooo. They definitely didn’t. I asked the sound guy and he just kind of laughed. I was like, got it.

What do you have the rest of the weekend?
Tonight I’m doing the Jack Johnson, and then I’m doing R. Kelly …

Oh, wow. What was the prep like for that one?
That was an interesting one. He’s got some funny stuff out there. That’s gonna be a crapshoot. What he’s gonna do, I don’t know. And he’s politically fired. People have a definite opinion about him as a person. So as an interpreter you strive to be neutral and only interpret what he’s saying.

You have to make sure you don’t bias the audience one way or the other?
An interpreter strives to maintain the intent of the speaker. As a person our opinions are not involved at all.

Do you have a favorite genre to interpret?
Hip-hop’s kind of becoming my thing.