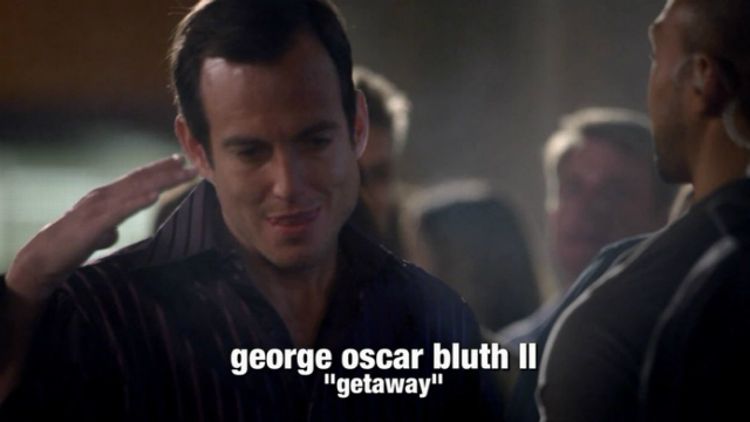 Gob is a dick. He’d probably be the first to admit it. What’s amazing about the character is how much we like him anyway. In previous seasons, he’s bedded (or attempted to bed) Michael’s girlfriend, he’s romanced Lucille Two for her money, he’s been the voice of a racist puppet, pretended to kill a stripper, and fired the entire staff of the Bluth company for laughing at him. Yet he’s so inept and ultimately so desperate for love and acceptance that his avarice isn’t offensive. We know, if he doesn’t, that the reason he craves success is to fill that Bluth-family-size hole inside him. His development is less obviously arrested than others in the family, but he’s no less a child — he even believes in magic. (A favorite moment from this episode: Gob unloads his drowned stunt animals, explaining how he was going to turn flowers into doves, and doves into rabbits. Tobias interjects, “And rabbits into mice!” Gob deadpans with the seriousness of a believer, not a skeptic: “That can’t be done.”)

Of the entire Bluth family, Gob has the biggest gap between his selfishness and his haplessness: Lucille might be greedier, but she’s also more on the ball; Tobias is comparatively saintly (like the Amazing Jesus!), but he’s also almost completely helpless. Gob desperately wants fame, riches, and women, and his egotism would be distasteful but for his inability to actually obtain what he wants — and the pitiful depths (sometimes literally) he sinks to while trying. His awareness of his faults glimmers to the surface only rarely; he doesn’t think it’s his character flaws that doom him, but his choices: He’s not stupid, he’s just made a huge mistake.

“Colony Collapse” is, of course, a series of them. We begin with Gob having fallen in with an Entourage-type crew, with names (not Turtle, “Trout”) and a few details altered (parody or another example of how to “go off-brand, change the names, and do a cheap, generic knockoff”?). He’s “Getaway,” the fifth or sixth or seventh wheel of a much younger clique whose fame and celebrity Gob craves so deeply he is willing to put up with being “three away from the center, at the closest.”

We rewind to pick up where the series left off at the end of Season 3: Gob enmeshed in a relationship with Ann Veal, who is “less than an hour from turning 18.” Yes, her. The episode revels in the return of plant/egg/plain jokes about unlovely Ann, also introducing a new (I think) twist on her immovable unremarkableness with how Gob vamps when he stumbles on his lady’s name: “Aaaannnnn … d,” he adds.

Gob beds Ann, despite some turbulence (“It seemed that the only ‘her’ he would be getting off that day was the Queen Mary”) and misgivings (“The Sound of Silence” is Season 4’s Charlie Brown theme). The next morning, Gob is so relieved by Ann’s initial willingness to break off the relationship, he spits out, “Marry me!” Only he means it in the “showbiz-y way” Maeby used it to brush off questions about her age. He quickly learns that Ann, on the other hand, “like many evangelicals, took it literally.”

Gob breaks the news to the family at the by-now-familiar condo meeting scene, using the impending nuptials as an excuse to ask for some of that “stimmie money”: “I have mouths to feed. Or, mouth.” The family greets the news with painful nonchalance: “Hey, mouth, I didn’t see you sitting there.” (Replies Ann: “We rode up in the elevator together.”)

The awkward couple appear on the Miracle Network’s “And As It Is Such, So Also As Such Is It Unto You,” where Gob makes a surprise announcement that the couple will be getting married on the show — and he will be performing one of his “magical illusions” at the ceremony, one so grand that “once you have beholden it, you will put no god before me, because of its spectacularity.” He only proposes to do it “out of love for God … ” – “Ann,” she supplies — “Annnnd,” he agrees. “Out of love for God and.”

Gob’s ego has always been out of control, but his gloss on the resurrection is especially bold, if, as usual, equally unself-aware. He appears at the wedding fake-crucified on a giant cross (which you will recognize from the second Michael episode), and is surprised when his sacrilegious patter falls flat: “I am not the real Jesus. I am the AMAZING JESUS … No?”

His bettering-Jesus-by-two-weeks escape from a fake cave depends on his being spirited away in a hollow boulder (rather than one, say, “as solid as a rock”?). Alas, he can’t open the secret compartment in the cave containing the key to his handcuffs. He is knocked unconscious and Ann is more on target than she knows when she sighs, “He’s not coming back.”

The boulder finds its way to a storage locker, only to be freed in an episode of Locker Hawkers. (Both the “busted magic boulder” and the “feral Jesus” are worth zero dollars.) Ann comes to see Gob as he convalesces, where “he was happy to see a familiar shape.” She leaves him, but her evangelism (and nothing in his system but two weeks of candy vines) inspires him to call his estranged son, Steve Holt!

A much-changed Holt agrees to meet Gob at “Aaannnd, that bar owned by Jeremy Pivan” (Peee-vahn). “And perhaps it was because Gob was inadvertently so warm with his son,” Holt invites him to join his pest control company.

Gob celebrates his way into the previously established entourage, primarily by throwing lighter fluid into the eyes of the paparazzi when it looks like the gang will get caught partying too hard with Rebel Alley.

Quickly the glamour turns sour: A one-night stand scrawls on his bathroom mirror, “Hey, Joe-with-a-b, I have sifilus.” He begins popping forget-me-nows to bury his shame, but quickly enters a “roofie circle,” where he take the pills too late to forget the night before, but manages to “erase the memory of attempting to erase the memory.” Of course, “What begins in shame almost always ends in a Mexican hospital with Stage 4 syphilis.”

Mark Cherry and Trout and the rest of Cherry’s following are tired of the sick guy in the $3,000 pants. Cherry even writes a catchy song to try to communicate that Gob is no longer welcome: “Stay away, Getaway.” But “the lyrics were too subtle for Gob to notice.” Later, they trick Gob into raising the partition as he drives them around: “Pretend you’re a limo driver!” But with the partition closed, Gob can’t warn them about the sick bees he’s stashed in the trunk, set free into the cab by the post-Tobias DeBrie.

The stung Cherry winds up in rehab, as Gob finds out when he attends the “Opies” (an awards ceremony for young Hollywood). Realizing that “he had lost his finance, his career, his family, and his entourage,” Gob is in the right mental place to accept Lucille’s offer to head to Mexico to help out George Sr. — a scheme otherwise known as “Plan B.”

Stuff I recognized from the first three seasons (did you see more? Please add in the comments):

Stuff I recognized from this season (put your finds in the comments, please!):