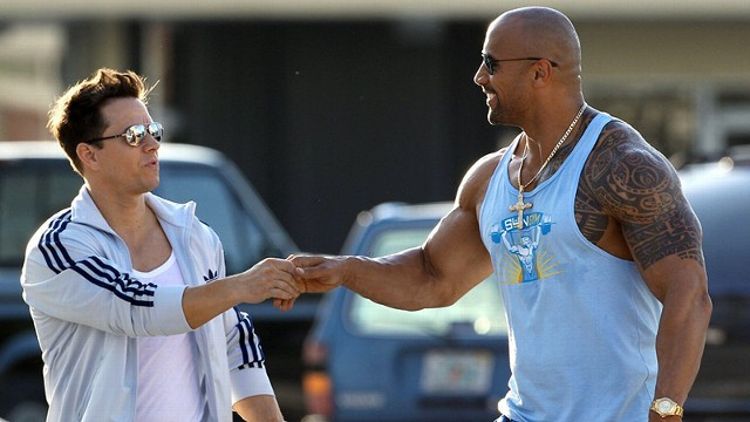 Yesterday afternoon, Michael Bay debuted the trailer for Pain and Gain, his first non-Transformers movie since 2005, inspiring an internal Grantland e-mail chain every bit as over-the-top and exuberantly explosion-laden as his filmography. So we thought we’d share it. What has 16 thumbs and is way too excited about The Rock and Mark Wahlberg playing criminal bodybuilders? These guys.

I haven’t been this excited since the first Fast Four commercial.

If this movie doesn’t have at least three sequels then we’ve failed as a society.

Chris Ryan: “It hurts. I know it does. That’s it. Get it.” – William Shakespeare

Dan Fierman: There’s a fair chance this is the most important American document since Leaves of Grass or the Emancipation Proclamation. I would like to officially requisition monies to erect a gigantic statue of Michael Bay made entirely of used HGH syringes in the Grantland offices.

Mark Lisanti: I’ve seen a number of people online saying this is “the movie Michael Bay was born to make.” But isn’t it really “the movie we were all born to watch”?

Suddenly there’s meaning in 20 years of cameras swinging from helicopters to film shit blowing up. It all comes down to this.

Simmons: Michael Bay: “We’d love to have the Rock in my new totally over the top action movie about steroids that features bad acting and guys running in slow motion, would he consider it?”

The Rock’s Agent: “I don’t know, it seems like too much of a stretch for him.”

“Hey, you been working out?”

Simmons: If the 2004 Red Sox appear in the ending of this movie, I’m going to be pissed off.

Fierman: Also, a real boon for those of us who have been waiting to see Tony Shaloub go “Full Bluftone” for the first time since 1990’s Quick Change.

Sean Fennessey: While working on a story about him last year, I asked Michael Bay about this movie right before principal photography began. Here’s how he described it:

“I’m gonna do a small character piece next. I love this script. It’s well-written. It’s just great to work with actors.”

HE DESCRIBED THE BODYBUILDERS HEIST MOVIE STARRING THE ROCK AS “a small character piece.”

Mays: I just got off the phone with a couple people, and I can officially confirm that next year’s Oscars are canceled. Everyone feels like it would be a waste of time.

Chuck Klosterman: How is wearing sweat pants to work a problem?

Alex Pappademas: I’m on shitty in-flight Internet right now and can’t get this to play past the first 4 seconds, but based on what I’ve seen so far — Mark Wahlberg hanging from a wall, possibly by his penis, doing sit-ups and screaming “I’M HOT!” — this is clearly Bay’s most autobiographical work to date, his 8 1/2, his Stardust Memories. I’ll meet you guys in the front row on opening day with a six-pack of Muscle Milk.

Sent via BlackBerry by AT&T