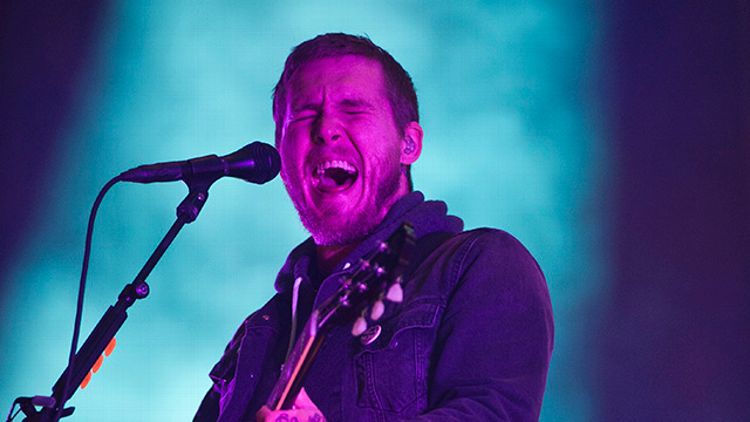 On Sunday night, during an on-and-off downpour, the Gaslight Anthem played a stage propped on the edge of a scenic pier on New York’s Hudson River. In front of them was One World Trade (the erstwhile Freedom Tower), a glowing behemoth pocked with financial district skyscrapers made almost diminutive in its wake. Behind them, just over the river, was their beloved New Jersey. And directly below them was a gang of their usually loyal Anthemheads, rendered on this night a little wet and, it turned out, maybe a little irritable for it. For almost the entire night, you couldn’t tell at all. The jams dropped and were received with the fist-pump wrap-up-a-random-sweaty-stranger enthusiasm for which they were engineered. Then came the encore, and an attempt from Gaslight frontman Brian Fallon (always a chatty fellow from the stage, and generally affably so) at a pop-hit sing-along. It was, it turned out, a doomed attempt at a pop-hit sing-along. And it left Fallon expressing to NYC, in as wonderfully emo a manner as possible short of LiveJournal — with a Tumblr post and a cryptic Instagram message! — that they’d just about broken his heart tonight.

But before that, we got the Hold Steady. The word-nerd indie rockers were just up from Nashville, where they’re recording a follow-up to 2010’s Heaven Is Whenever, and had a couple of new joints to lay down, plus one excellent surprise: Patrick Stickles, frontman of Titus Andronicus, celebrating his 28th birthday by joining the band on Separation Sunday classic “Cattle and the Creeping Things.” With Hold Steady frontman Craig Finn his wonderfully spastic hypeman, Stickles crushed it, channeling some unholy combination of your Sunday hardcore matinees and early ’90s Ice Cube. It was awesome.

Next: Gaslight, and their on-character, pitch-perfect first set. Then, that troubled encore. As far as I recall, the first thing that threw Fallon off was the “Bruuuuuce” chants. See, TGA and Mr. Springsteen had, at one point, a nicely symbiotic relationship: Gaslight got to hijack all his best bits; Bruce got to pal around live with the dudes and remind the young’uns he started this blue-collar shit. But, being a fully conscious creative person and all, Fallon is apparently a bit uncomfortable with being too closely tied to his idol. “Those days are over,” he responded to the chants, with a grin. “That was a cool thing that happened to me, not you.” Then he tried to do what he usually does at this point, and ran through a couple of fun back-and-forths. This is how it usually goes.

Last night, though, was a total bust. Maybe it was the rain; maybe the crowd was just a little more boozed up than usual. Either way, no one wanted to hear Lady Gaga. Bon Jovi, then? Even less. Fed up, Fallon laced into his adoring multitudes, mocking them for thinking they were too hardcore for Gaga. He knows all the hardcore dudes, he said, and they like Gaga, because they like having a good time. Also, we should buy some Madball records? “I could just pull an Axl Rose and leave,” he threatened, before throwing his hands up in defeat. “Ahh, you ruined it.” Being the consummate professionals that they are, the band dutifully ran through their encore, ending things on a rousingly bashed through “Baba O’Reilly.” But Fallon sulked off the stage, never offering even one other morsel of banter into the microphone.

Later in the night, via that Tumblr post — “Tonight You Have Broken My Heart” — he explained himself. You can read the whole thing here, but to try to sum up his point:

I feel it necessary to address that we are The Gaslight Anthem. We play Gaslight Anthem songs. We’re not the band you think we may be akin to. My name isn’t Bruce, It’s not Eddie, or Joe, or Paul either. If you’d like to hear their songs they are readily available and the former two tour quite often. You should go see them, they put on great shows. They play long sets over two hours sometimes. It’s truly amazing to watch them at their craft. But again, we’re not them.

I’m asking openly and humbly that if anyone would like to come to a Gaslight Anthem show, please come because you want to see what we’re doing on that night. Don’t come to see Bruce, he won’t be there. Don’t come to hear a cover, it probably won’t happen. Don’t come to yell at me when I’m trying to share something with the audience to reach out to them about something I feel is moving me.

It was certainly an awkward moment. And it’s certainly a bummer that, after a great show, what almost everyone will remember was that touch of dissonance. But it was also kind of great: How often do we get to see a dude be truly vulnerable up on a stage? And while he doesn’t actually mention it in his post, I don’t think it was so much the “Bruuuuce” chants as it was the, uh, lack of enthusiasm for Lady Gaga that did it.

Look, Fallon wanted to sing along to “Bad Romance.” He likes “Bad Romance.” He thinks it’s a good song. (He also finds Katy Perry’s “Teenage Dream” quite a fun time.) But a bunch of dudes had to be too cool for school, and made him feel like a dunce for liking “Bad Romance.” So, within bounds, he acted out. It’s the same exact feeling you get when you’re in a car full of people and everyone starts making fun of your music choices — only, you know, amplified by 20,000. You hate everyone in the whole world and you wanna smash your iPhone out the window and you wanna not say a word the whole rest of the ride back from the beach. And it’s not fair. All of which is a long-winded way of saying: Next time Brian Fallon wants to sing some Lady Gaga, let’s just sing some Lady Gaga?