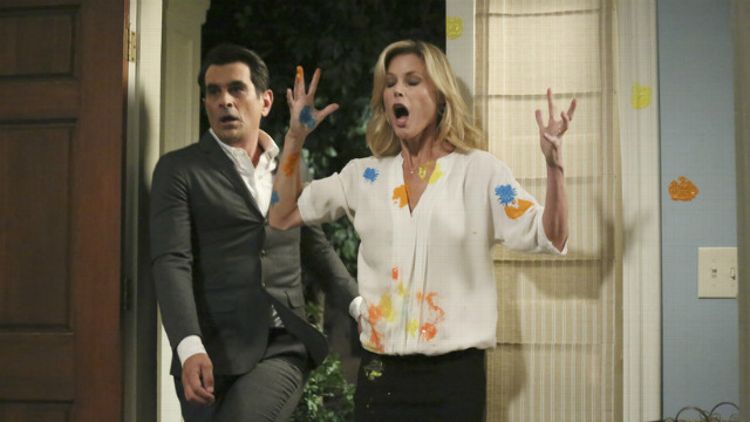 Yesterday I wrote at length about TV comedies that are popular with a certain sliver of the viewing public, primarily those who write about TV for a living. It’s only logical, then, to take some time today to check in on a show that is popular popular: ABC’s Modern Family. (Standard disclosure: ABC and Grantland are both owned by the Walt Disney Company.) Now in its fifth season, the show is an indefatigable, Emmy-devouring juggernaut — and it’s showing no signs of flagging. The third week of fall is traditionally when ratings dip precipitously, even for established series. Yet last week Modern Family managed a robust audience of 11 million. By contrast, Fox’s New Girl, the anchor of its Tuesday nights and the subject of many mash notes scribbled by yours truly, drew a relatively anemic 3.8 million — and it was still Fox’s best-rated show of the night. Screw Twitter “impressions.” Modern Family is a giant, honking hit by any metric.

It’s not hard to see why. Though my focus has waxed and waned since the third season, I still revisit the pilot frequently to marvel at its dazzling efficiency. Most comedies take months to find their voices — some take considerably longer  — but Modern Family was utterly itself from the opening seconds. This was no small feat: In 22 minutes, co-creators Steven Levitan and Christopher Lloyd introduced three households with 10 distinct characters and not only made us understand the relationships between them but also made us laugh. This was comedy, yes, but it was also a remarkable display of a more rare Hollywood commodity: competence.

With what appeared to be minimum effort, Levitan and Lloyd were able to service two heretofore distinct flora of fan: those yearning for the dependable software of classic family sitcoms and those fully upgraded for the harder, faster — some would add “better” — single-camera world. (The title of the show may as well have had a comma wedged in the middle of it.) The result was like the warm crackle of vinyl spinning at blinding, digital speed. Modern Family was the alpha and omega, an old-school success story in a new media marketplace. It was unstoppable. And, as many, many network development executives learned, it was also unrepeatable.

But is it still any good? I’ve written repeatedly about how consistency in comedy makes for excellent watching but diminishes conversation. But that was in regard to Parks and Recreation, a show that stays creatively steady even while it pushes its plots forward with the relentless appetite of Leslie Knope at an all-you-can-eat waffle breakfast. Modern Family, by contrast, stays fat and happy in its impeccably appointed lane. I’d argue with any Emmy voter that says Modern Family is the best comedy on television, but it’s unquestionably the best run. The jokes are as solid as ever, the performances flawless, the choreography — the way Phil and Claire’s A-story pirouttes into Gloria and Jay’s B before twirling into Cam and Mitchell’s C — beyond compare. Between drafts of acceptance speeches, Levitan still manages a tight writers’ room, packed with homegrown talent (Elaine Ko) and pricey free agents (Arrested Development's Abraham Higginbotham, The Daily Show's Ben Karlin).

After burning through the first four episodes of Season 5, I was intermittently charmed and more or less entertained. There’s an undeniable comfort to Modern Family's reliability but there are also fewer laughs: Any well-tread lane eventually becomes a rut. The foibles may change from episode to episode but the stakes never do. Every half-hour tumbles and cascades with the highly controlled chaos of a man-made waterfall; there is little overflow, no spillage, and nobody ever gets soaked. (Well, not very often.)

A large part of the appeal of sitcoms old and new comes from audience familiarity with the quirks of beloved characters. (Every writer wants to create a Norm Peterson. Every producer wants the audience to react to said Norm Peterson exactly like this.) But sitcom characters have a tendency to calcify into caricature over time. You can set your watch by Phil’s half-baked, milquetoast fumbling, by Manny’s prissy maturity. I still find a lot to admire in Julie Bowen’s Claire, an unsnappable tendon in Ann Taylor slacks, even though the show too often reduces her to a Swiffer-toting Gorgon. The one-note nature of the Dunphy kids — Ditz, Brain, Boy — has yet to converge into any sort of melody. And all across the board, what once were refreshing idiosyncrasies now play off each other in all too conventional ways — a problem faced by all long-running sitcoms but one exacerbated by Modern Family's large cast and breakneck pace. There simply isn’t any oxygen reserved for new voices and no time to let things breathe. Too often the plot of the week feels like a shiny pinball dropped into a noisy, unchanging game board. I found myself praying for any unexpected tilt.

This might be why my favorite bits revolved around the newest cast member, Aubrey Anderson-Emmons, who plays Lily, the adopted daughter of Cam and Mitchell. (“Honey, no one leaves home and doesn’t come back,” Ed O’Neill’s Jay told her in the season premiere. Her reply? “I did.”) Her miniature deadpan gives the oft-hystercial — in all senses — Eric Stonestreet something different to play against as it did last week in “Larry’s Wife,” when Cam’s escalating, child-protecting lies led to an elaborate funeral for a made-up cat and the funniest set piece the show has had in months. Even at its best, Modern Family tends toward broadness, so I appreciated the relative delicacy of Cam and Mitchell’s engagement. Much of “Suddenly Last Summer” played like a farce warmed over from an “Archie” comic — missing wallets! Fake illness! Runaway tires! — until the silliness receded and the characters were allowed a quiet moment of earned sweetness. (Don’t get me wrong — I like my comedies plenty funny! — but Modern Family can be remarkably shrill, if not venomous, in its usual approach to intrafamily squabbling.) And I was surprised to learn that last night’s perfectly serviceable “Farm Strong” was the series 100th episode, an occasion lesser shows have marked with greater fanfare, from clip shows to trips to Hawaii.

That Modern Family is, at worst, a smoothly humming smile machine is no great crime. (And if it is, it’s a crime that definitely pays.) One of the byproducts of our contemporary cultural obsession with quality TV is that risk-taking is celebrated above nearly all else, even though it’s a concept that’s proved to be anathema to decades of sitcom development. Current causes célèbres — causes célèbred by yours truly! — like New Girl and The Mindy Project draw our attention for taking big sloppy swings even though their batting average is streaky at best. With its decidedly more modest goals — hitting marks, landing jokes, doing better next week — Modern Family is, at its core, as old-fashioned as its ratings are huge.