Greatness in the Uncommon: Sports, Narrative Fiction, and Netflix’s ‘The Battered Bastards of Baseball’ 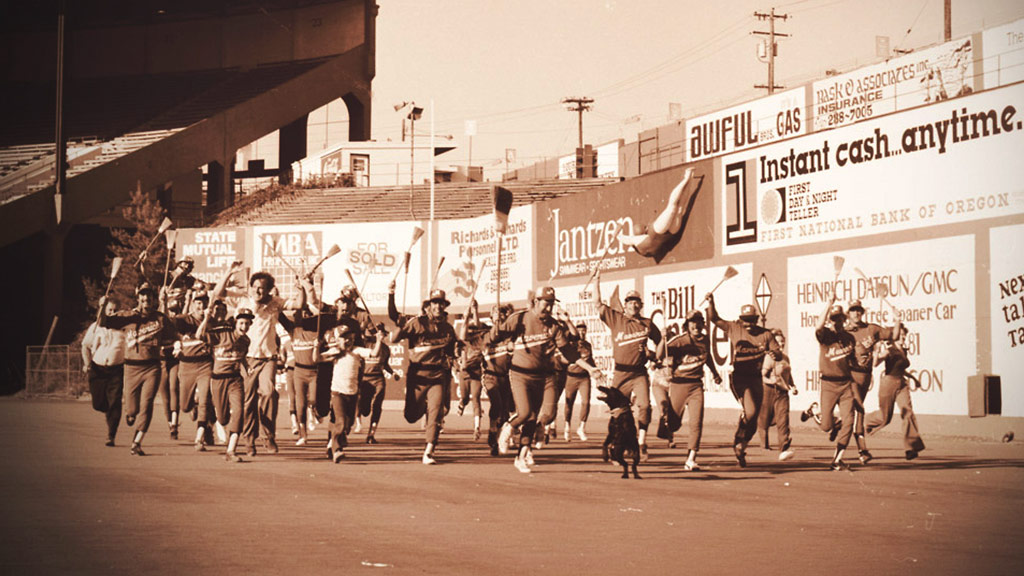 A renegade owner takes over a minor league baseball team and assembles a group of castoffs. Those castoffs then start winning, much to the chagrin of organized baseball, and much to the delight of fans in a market that almost everyone thought had abandoned the game.

That’s the basic plot of The Battered Bastards of Baseball, now out on Netflix. The documentary tells the story of the Portland Mavericks, the only independently run team in organized baseball from 1973 to 1977.

The characters include owner Bing Russell, a former Hollywood character actor and lifelong baseball nut; his son Kurt, the team’s second baseman and future film superstar; pitcher Rob Nelson, who came to Portland from South Africa when his father showed him an ad in The Sporting News for open tryouts; oddball manager and restaurateur Frank “The Flake” Peters, whose Hawaiian shirts, bucket hats, and general demeanor made me think he came from M*A*S*H and not the Baltimore Orioles, as the film claims. There’s also Lanny Moss, the first female GM in the history of the game; Jim Swanson, a left-handed throwing catcher; and Joe Garza, a seldom-used infielder who was known largely for venturing out into the stands and lighting brooms on fire whenever the team swept a series. Jim Bouton even showed up long enough to win a pennant and, along with Nelson, to invent Big League Chew in the Mavericks bullpen.

The Battered Bastards of Baseball is part Moneyball, part Major League, part Bull Durham, and part The Great American Novel, except it actually happened. It’s not particularly unbelievable, either, that a master showman like Bing Russell could sell the game in a new way, or that a team of players in their late 20s and early 30s could beat up on a low-A league in which their opponents were mostly teenagers and recent college graduates whose primary goal was player development, not winning. It’s not a monumentally important story or a monumentally shocking story.

But it’s fun. We’re living in something of a golden age for sports documentaries, and if you think I’m just shilling for 30 for 30, I’m not. These films come from all sources and range in tone from the cheeky and nostalgic Once in a Lifetime to the bleak and revelatory Pelotero to the beautiful and majestic Senna, which is, as far as I’m concerned, the best sports documentary I’ve ever seen.

The Battered Bastards of Baseball isn’t in that class. It’s informative, it’s earnest, and it’s unbelievably fun to watch, but the narrative is somewhat sloppily constructed: Events are elided and dates ignored to the point where you’ve got to watch it with Baseball-Reference.com open on your computer if you want to know what happened when. And not to spoil the ending, but “rich guy gets a big payoff when his business gets bought out” isn’t exactly the rousing anti-establishment message the directors — Russell’s grandchildren — seem to want it to be.

But it’s a good story, and that’s all we want from a sports documentary. It’s why so many of the best sports movies — either documentaries or works of fiction based on true stories, like Chariots of Fire and Friday Night Lights — come from outside what we’d get from watching ESPN all day.

We don’t love sports because they’re fun on their own. We love sports because we love hearing and seeing stories told, and hundreds of stories are told throughout the sports world every day on the field, with thousands told or revealed off of it. It’s why we read magazine profiles of athletes and buy into ridiculous myths like a team’s victory somehow validating its city, and it’s why we peddle equally ridiculous myths like clutchness and killer instinct as analysis: We want sports to mean something more than crude entertainment, and with once-in-a-generation exceptions, like Muhammad Ali or the Miracle on Ice, they don’t.

Lots of people get into sports for the community, either because their dad or their college roommate or their spouse took them to a game once, or because they like fitting in with a crowd. I want to see uncommon greatness, which is why I watch Mike Trout and LeBron James, or anything in the four major sports.

But I also believe there’s greatness in the uncommon, and that when we dig down into the weirdness of minor league baseball or even into the history of a sport with which most American fans are unfamiliar, like cycling or Formula 1, we’ll find heroes, villains, and colorful supporting characters fit for any work of narrative fiction. I’m in it for the spectacle, but I’m also in it for the stories, the folklore, and the mythology.

The Battered Bastards of Baseball is completely unfamiliar territory to most people, and the movie’s worth the 73 minutes it takes to watch it on its own. It’s part of a movement in sports filmmaking to find new stories to tell, particularly if those stories come from unfamiliar places or from times we’ve forgotten. And I’ll support any movement like that.

Girls in Hoodies Podcast: ‘The Hotwives of Orlando,’ ‘The Purge: Anarchy,’ and Answering Mailbag Questions