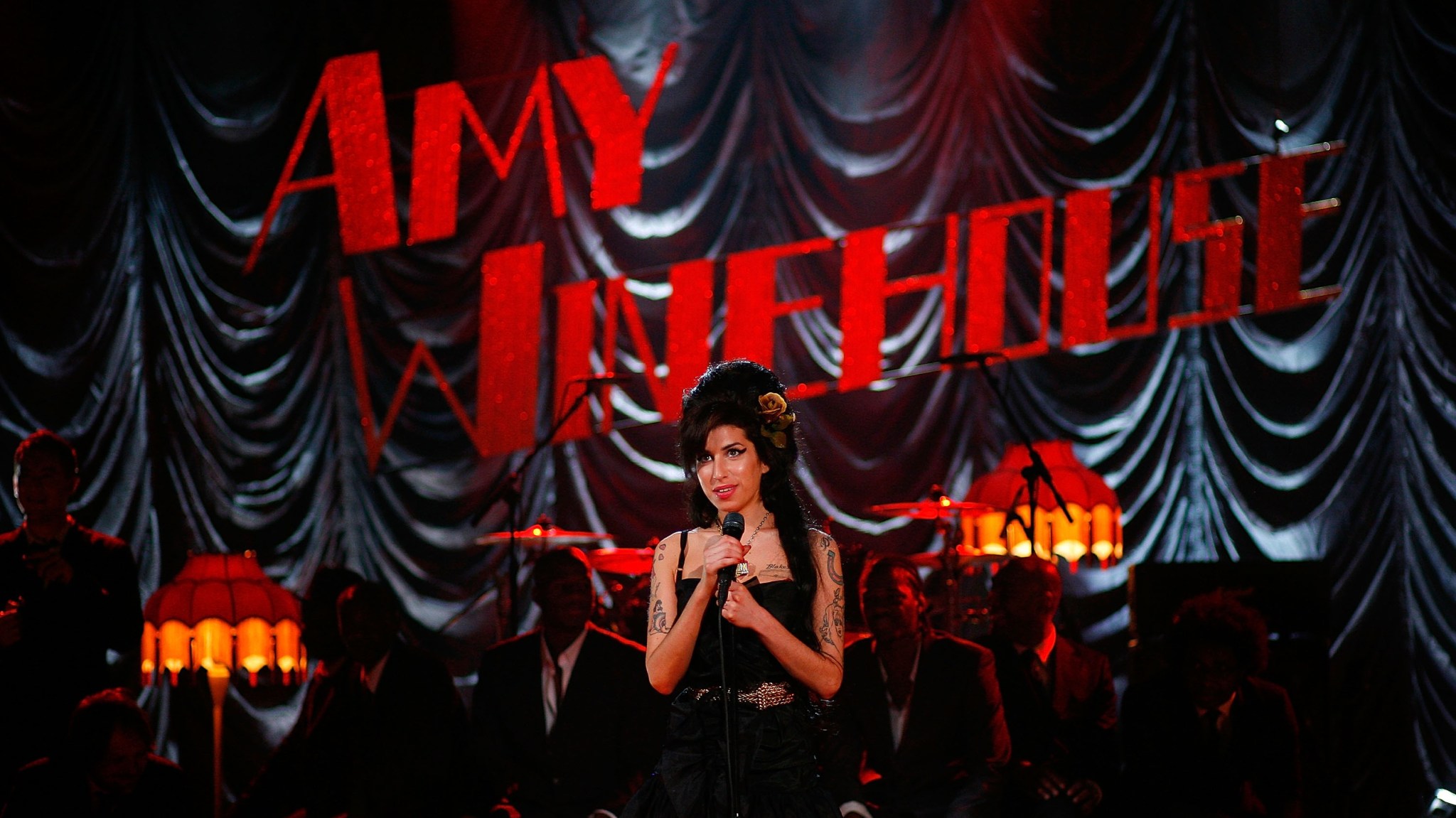 I had thought I’d seen the most shocking paparazzi assaults, the ones on Michael Jackson and Madonna, on the Kardashians and the Jolie-Pitts. But there are a couple of scenes in Asif Kapadia’s new Amy Winehouse documentary, Amy, that make the fame-industrial complex seem rock-bottom awful. They mostly involve attempts by Winehouse to leave and enter her home at the height of her fame, between 2007 and 2011, the year she was found dead of alcohol poisoning in her London home. Sometimes she’s stuporously out of it. Sometimes she’s backed into a rage, striking at the stampede of taunting cameramen, whose flashbulbs comport themselves in a manner fit for a Hitchcock film — like slashing knives, or swooping gulls.

In a sense, Amy is the complex feeding once again: two hours of video footage layered with audio-only interviews of the people in Winehouse’s life (friends, family, lovers, collaborators, doctors). It stretches from her belting “Happy Birthday” in a hallway when she was a teenager to her London funeral. In between, there’s the litany of afflictions and addictions and the images of the good times, bad times, and worse. There is also her music, which began as smoky, snarling jazz and eventually coiled into a songcraft that sounded unclassifiable and new.

Kapadia has no immediately new argument to make, no revelations to put forth. It is as impressionistically ghostly as Senna, Kapadia’s previous documentary, another footage-and-disembodied-audio treatment of the race car champion Ayrton Senna. And it loosens anew Winehouse’s smoldering, old-soul artistry. This isn’t a cash-in but a principled occasion for contemplation. It’s another attempt to reckon with the particular collision of brilliance, celebrity, mental illness, exploitation, and addiction. At this point the tales are so familiar, the list of names so long, and the lethal cocktail so obvious and yet mysterious that each flameout demands serious assessment, a nonscientific version of football players donating their brains to concussion research.

The Winehouse film arrives a few weeks after the release of What Happened, Miss Simone?, a documentary by Liz Garbus that is also about the tragic personal demise of a great musician. Nina Simone lasted longer than Winehouse; she was born in 1933 and died 70 years later. Winehouse is the author of two official albums, 2003’s Frank and 2006’s Back to Black. Simone’s catalogue appears to have neither a ceiling nor a floor. But seeing both movies in the space of a week puts you in the frame of mind to see the two singers as kindred spirits.

Simone hailed from the Southern church but studied to become a classical pianist. Racism and penury thwarted the completion of her training, and she wound up playing and singing in clubs, changing her name from Eunice Waymon to save her parents the embarrassment of her playing neither classical music nor gospel. What Simone did play was harder to place on a record-store shelf than Winehouse’s music. Unofficially, it, too, was jazz. But her voice was heavy, emotionally fathoms deep. It hurt and you hurt for it. It got at your sense of hurt — at least it did mine. She was first an interpreter of other people’s songs, and in her own songwriting an interpreter of the times. Simone rose to prominence during the civil rights movement, and was hotly ensconced in its less pacific activist wing. The call-and-response refrain from 1964’s “Mississippi Goddam” — her reaction to the murders of the civil rights leader Medgar Evers and four black girls in an Alabama church — was “too slow.” The nonviolence movement was too slow, the Johnson administration’s response to white violence was too slow. Change in general was too slow. She gave herself and her anger over to the movement, and the donation seemed to have cost her her career and arguably her sanity.

The film presents Simone in performance footage and archival interviews. But compared to Amy, it’s more omissive than impressionistic. Garbus relies on a small handful of interviews with her intimates, including her daughter, Lisa Stroud, and Simone’s ex-husband, Andrew Stroud, a cop who became her manager. Their marriage was as volatile as Simone herself, and Lisa wasn’t spared from that strife. I suppose that without Lisa’s testimony, from the seats of some kind of theater, we’d have no account of the abuse to which Simone subjected her after they left the United States in 1970 for Barbados, then Liberia, and eventually France.

The movie isn’t looking to reconcile the artist and the woman — that might not even be possible. But the film can’t quite make sense of one in relation to the other, either, even though Simone’s state of mind began to inform the state of her music. There is one concert, in Paris in 1976, that brings it all home, in which you get a sustained view of both. Garbus opens the film with a bit from it and returns to it in the second hour. It’s just Simone, a piano, a black dress, a little Afro, and some makeup. She makes a speech about moving on to a kind of higher plane and hopes that the audience will come with her. In the middle of “I Wish I Knew How It Would Feel to Be Free,” she stops and implores someone in the audience to sit down. The entire concert, which lasts just over an hour, was released as something that’s now called Nina Simone, Love Sorceress … Forever and features some extraneous offstage footage. It presents Simone’s brilliance and instability as of a sad, strange, exhilarating piece. (At one point, she searches the mostly white audience for David Bowie.) This is both theater and therapy.

What Garbus does is complicate a concert like that with grim clarifying details. Simone kept working as a matter of vocation, yes, but of obligation, too. In a journal entry, she writes of being tired but of also being required to continue to make money, even though she’s clearly begun to slip into what can only be described as an onset of Grey Gardens. This isn’t dissimilar to what befell Winehouse toward the end. The revolving door of her botched rehab stints kept spitting her out onto concert stages against the advice of medical professionals and the pleading of Winehouse’s childhood friends. There’s an ugly scene from 2011 at a sold-out stadium show in Belgrade, in which an inebriated Winehouse takes the stage but doesn’t perform while the crowd starts to boo, that indicts the meaning of entertainment. People who make beautiful things are sometimes expected to present it amid ugly circumstances, from ugly places, for and surrounded by ugly people. This year has also brought films about Brian Wilson (the half-inspired, half-embarrassing drama Love & Mercy) and Kurt Cobain (an electrifyingly conceived documentary called Montage of Heck). Both should have been able to see siblings in Simone and Winehouse.

Simone and Winehouse were powerful singers who wrote and performed, in their respective ways, about power. I discovered Simone’s music while flipping through the soul section in a used record store when I was 17. Somebody put 1966’s Wild Is the Wind and High Priestess of Soul on a double album, which I listened to with a set of headphones in my bedroom. I’d never heard anything that sounded that black to me, just proud and sad and angry but pretty in a private, fragile, wounded upside-down sort of way. With all due respect to the Ellas and Nancys and Arethas and Gladyses — to glimmer, nimbleness, and vocal breadth — Simone’s voice was jazz and soul to me.

Winehouse, at first, seemed like an imitation of authenticity. Her song “Rehab” took over the world in 2007 and 2008, and I resisted because it seemed attached to what felt like a gimmick. She had the most beguiling look I’ve ever seen on a pop star: a runaway Ronette disguised as a waitress in a biker-gang movie. The sound was, in part, courtesy of Salaam Remi and Mark Ronson, and their inside-out restructuring of hip-hop as Phil Spector or Berry Gordy felt both inevitable and new. But another reason I resisted Winehouse was that she got to my ears at the same time as a handful of other British soul singers — Adele, Estelle, Leona Lewis, and Duffy — and the rise of gimmicky, post-Madonna American artists like Lady Gaga, Kesha, and Nicki Minaj. But at the 2008 Grammys I felt like I’d heard what people who loved Winehouse heard.

She appeared via satellite from a set in London, where she was in recovery from another well-covered collapse. Kapadia’s movie has supporting footage from that night: her dissing Justin Timberlake and swooning over Tony Bennett as he announced “Rehab” the record of the year. But it leaves out her performance of the song, which, in a movie that turns the hit into a good live montage, is fair. Kapadia has already made the case for Winehouse’s interpretative genius of both her own music and of other people’s. But tattooed and katydid-thin, in a black, satiny, belted cocktail minidress, with a black beehive atop her head, and surrounded by a big band of dapper, mostly black men, Winehouse seemed to be pulling the emotional drama of the lyrics out of her pores, putting more oomph and less snarl into the belting, using her hips and arms to denote rises and falls and twists. She was captivating, knowingly comic, and evidently a star. The whole performance was glamorous, even if there was something vividly cautionary in that glamour. At the end of the song, she wails, jumps back from the microphone, and, with the beat, claps her one-two-three, and I remember catching my breath and saying out loud that I wanted that woman to live.

But fame is an artist’s disease. Some artists catch it hard, and the disease exacerbates preexisting problems and won’t let go until the artist is forced to let go of herself. Every time one of these people dies, we mourn and question and blame. But for the optimists there’s an upside. At this point, heaven must have a pretty astounding choir.