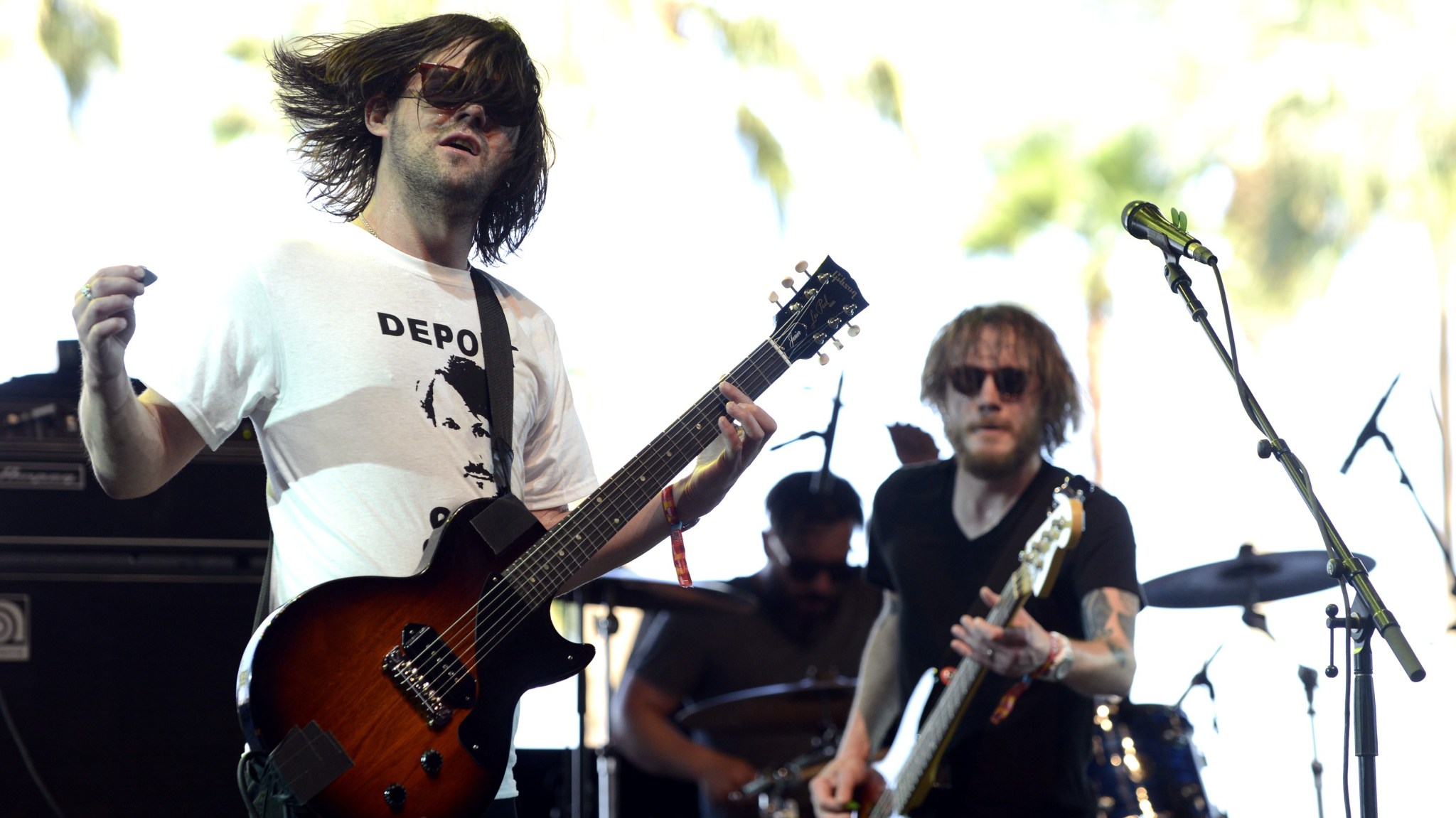 In 2002, Omaha’s Desaparecidos dropped its banger of a debut album, Read Music/Speak Spanish, a joyously clattering agitprop affair that managed to have fun while blasting through shouty, blunt screeds against, like, urban sprawl. Then the group disappeared. Frontman Conor Oberst was already cultivating a folk-star career with Bright Eyes. The rest of the band — including drummer Matt Baum, bassist Landon Hedges, guitarist Denver Dalley, and keyboardist Ian McElroy — had their own music projects as well.

Fast-forward 13 years, and here they unexpectedly are. They stayed pals through the years and started playing shows again in 2010, for the Oberst-organized Concert for Equality. Then Desaparecidos got back in the studio, eventually producing its sophomore album, Payola. It dropped in June, and the band didn’t miss a beat. Radical wealth inequality, dystopian government surveillance, the permanent undervaluing of labor: There is, as ever, lots of stuff to write shouty, angry punk songs about. And Desaparecidos is happy to do so.

Last week, Oberst and Baum got on the phone with Grantland for a little rock talk while on tour.

You guys kicked off your current tour by playing Shea Stadium in Brooklyn, which is a tiny little DIY space that’s way smaller than the rest of the venues you’re playing these days. How was it?

Oberst: It was amazing, actually. It was really funny, for the first five or six songs we were playing, my monitor kept getting flipped over. The kids kept pushing it into the stage! And all of a sudden I look up, and Gabe Gonzalez, our tour manager — who came off Gilman Street in Berkeley and shit — makes his way to the front of the stage and held it down so it wouldn’t flip over. It was a real cool punk rock moment.

Baum: I was super bummed about it before we got onstage. I was like, “Oh, it’s hot and sweaty.” I’m just a huge baby about that stuff. And then we were playing and I was like 17 again. It was like those old punk clubs that we used to play, drenched in sweat and all the kids killing themselves.

Oberst: We’re friends with the So So Glos, who are the band that started that Shea Stadium club. It was sort of a fun idea, to play their home spot. As far as all the other places [we’re playing], they’re just kind of the bigger places we can play.

Baum: A lot of arenas. A lot of baseball fields. Stuff like that.

Oberst: We’re doing the best we can here.

Do you remember the first punk shows you saw as kids?

Baum: The first punk show I remember going to was at this place in Omaha. Every Friday night there was either a hardcore or punk show, and every Saturday night there was a metal show. I think I saw the Weirdos there a million years ago. That’s the first one I remember. Or it might have been the Dicks?

Oberst: There’s a band called the Dicks? I don’t go back that far. There used to be a place called the Cog Factory, it was a little black box with a stage and a very minimal PA. And I saw a bunch of punk shows there. And you used to work there?

Baum: I used to run the place.

Oberst: That’s how I met Matt originally, when I was like 14.

What’s the age difference? Matt, how old are you?

What’s the first time you realized the impact that really loud music, especially live loud music, can have?

Baum: When I was 13 or 14, my friend’s mom took me and my friends to see Metallica. It was my first arena rock-type metal show, and the Cult was opening, and everyone there hated the Cult. Except for me. I was amazed by Ian [Astbury]. He comes out with his long hair and his cowboy hat and a fur coat and these crazy furry cowboy shirts and shit.

Oberst: I remember getting dragged along with my older brother at age 11 to see Fugazi at this defunct amusement park. And just trying to get up and watch the show but being so small and getting crushed in the crowd and kind of having to be dragged out to the crowd. That’s when I realized how insane people can get over that music.

Baum: I was at that show!

Getting back to the band — obviously 13 years is a long time, and people’s political views can shift over that kind of time. When you got back together and started writing new songs, did you have to have a sit-down to talk about where you all were on the political spectrum?

Oberst: I think we definitely talked about it more as a band this time. The first record, I was kind of writing the lyrics, and I don’t know that everyone really knew what the songs were about.

Oberst: It was an idea of doing something lyrically different than my other projects. But this time, obviously realizing what we wanted to be as a band, we did have more open discussions — we made sure everyone was on the same page. I mean obviously I get, like, the bulk of the shit for writing the lyrics. But you want everyone to be able to stand onstage and believe in what we’re doing.

Do you find that people want to lump your band in with other acts that are politically outspoken, like Run the Jewels? And that maybe sometimes it’s an awkward fit?

Baum: Right now I think we get treated like misfits. Wait a minute — a rock band that isn’t saying something about their dicks?!

There are a lot of places where you can engage with the stuff you sing about in a more nuanced, expansive way. And so it seems evident that there’s a lot of value in kind of screaming and flinging it out there the way you guys do. But do you find that people critique the lyrics for a lack of nuance?

Oberst: Yeah, that’s one of my favorite critiques because it’s so ridiculous. The idea that in a two-and-a-half-minute pop song, you nuance these issues. It is slogans, there is a bumper sticker vibe. They’re lyrics to rock songs. I’m not writing a think piece.

Baum: We’re not claiming to save the world, either. It’s not that simple. Oh yeah, they took down the confederate flag in South Carolina, there’s no more racism. I ran in this marathon and cured breast cancer. That’s not how it works.

Oberst: The lyrics, most of them are snarky and satirical. They’re meant to be taken a bit with a grain of salt. I think some people don’t always get the humor in it all. I can’t help how people receive it. You gotta put it out there and hope for the best.

There’s not that much in the way of images of your band. Is that on purpose? Or more of a function of everyone in the band having a bunch of different projects you were juggling?

Baum: I think it was [on purpose] a little bit, yeah. If you look at the history of metal, real metal, a lot of those bands got famous without you ever seeing a picture of the band. Because they were so good at what they did. Or because they were ugly as fuck. One or the other.

Oberst: I remember getting records, especially whatever underground music that we were into, and you had no idea what the band looked like until they came into town. Which was very rarely, in the case of Omaha.

Baum: There’s been like 26 Superchunk records; I don’t think there’s a picture of them on one of them.

Oberst: I remember being like, I wonder which one Mac [McCaughan] is. Your guess is as good as mine.

Baum: [This band] is not about our image. We’re not gorgeous. We’re all-right looking, but none of us are fucking models. Well, except maybe Denver. He’s very good looking.

With all that time off between live dates, how has it been like interacting with the new fans on tour?

Oberst: Well, I don’t talk to anyone ‘’cause of my bodyguards and stuff … no, but what freaks me out is when 19-year-old kids are like, I saw you guys the last time you were here! It’s like, We were here 10 years ago. You saw us when you were 9?

Baum: That, or the kids saying, My dad loves you guys!

Oberst: This happens a lot with my other bands, too, but you hear, Oh, I loved you guys so much in high school.

Baum: You look reaaaally good for your age.

Oberst: And they’re talking about the first shows. That was so fucking incredible when you played Baton Rouge. I remember that show. It was a train wreck. Our shit was unplugged. It was all out of tune. Some of those early shows were not good. I know for a fact.

Baum: It used to be, Oh, these guys are just gonna spaz out on stage and break shit. It’s gonna be terrible. You’ll love it. Now we have friends who see us play and are like, What the fuck? You guys can play your instruments now?

Oberst: It [even] took me by surprise. I was putting together this Concert for Equality, a protest against these crazy anti-immigration laws. And I asked the guys out of the blue — hey, can we play this show? And I was so stoked that everyone was onboard.

Denver was like, in Sri Lanka or some shit, and we only had two days to practice and we got together and I was — I wasn’t expecting the worst, but I was prepared for whatever. And we ended up playing the tightest show of our band’s history to date. After two days of practice after 10 years of not being a band. It was actually amazing. It’s like, none of us stopped playing music [during the hiatus].

Baum: Yeah. And Conor ditched us for real musicians.

Lastly, and most importantly — what is the best butchering of your band name that you’ve ever heard?

Baum: Well, it’s our fault. We decided to have our band name be something that no one can ever pronounce or spell.

Oberst: My wife is from Mexico City, and she says it beautifully. I feel like I mispronounce it too.

Baum: Some people just go with Desperadoes. Dos Burritos. Desapara-C-3PO. We filmed a show with that guy … what’s his name?

Baum: Carson Daly. God bless Carson Daly. He kicks ass. But he made the mistake of trying to use an accent. I’m so excited to have Deyyysaparrracidoooos.

From Mick to Mufasa: The Top 10 Movie Mentors of All Time