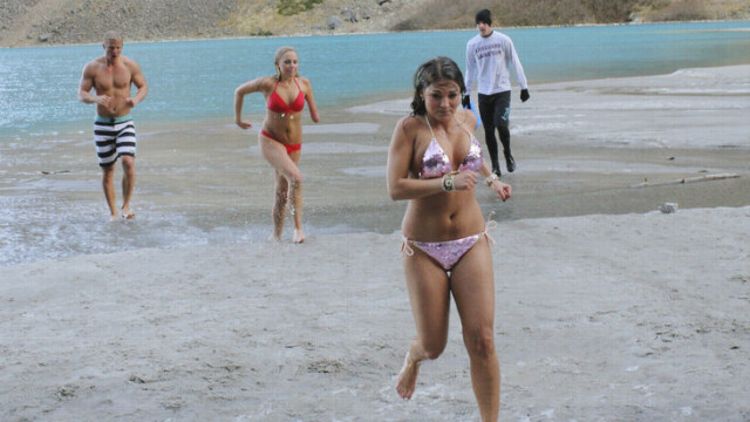 Even for those of us who work in The Bachelor–adjacent self-improvement industry, it’s possible for ABC’s sudden decision to cram four hours of the show into a two-night window to be too much of a good thing. The mind is an incredibly elastic organ, capable of amazing feats that prime-time teleneuroscientists don’t fully comprehend, but there are still limits to how much knowledge it can soak up in any 48-hour period. Picture a dry sponge the size of a child’s Nerf football. Now imagine pouring hot tar over it for two consecutive days. Indeed, some absorption will occur, but when you finally put down the enormous tar bucket, you’re going to have quite the mess to clean up. (Excuse any imprecision in this metaphor; we haven’t slept since Monday night’s “Previously on The Bachelor” montage, and it’s probably closer to the essential truth of the situation than you think.)

Since no simple diagram can capture the complexity of last night’s many lessons, let’s handle them in the more traditional manner. Here we go.

When that giant snowbus pulls up, get on it. Consider it a Canadian limousine. It will take you to your next adventure.

When he produces a toboggan, sit on it. It’s probably too cold for this to be a realistic, but you never know when a seemingly innocent sled outing might evolve into a sexual Iditarod. Be open to the possibility as his legs churn with the power of a dozen huskies.

When you’re taken to an ice castle, enter it. It’s been carved just for you. And it’s the perfect venue in which to …

Oh, dear. That story about your friend and the tree at summer camp is just awful. But this ice castle — they carved it just for you, remember — isn’t going to fill itself with the profound pain of a childhood trauma relived in front of an eventual audience of millions, so go ahead and share. You’ve learned to cherish each day since then, and we’ve already stressed the importance of embracing the moment. Sometimes you can’t worry about whether or not your Bachelor is going to freak out over the sudden velocity of your burgeoning relationship, place his now-frozen rose aside, and summon the giant snowbus to retrieve you, whispering instructions to its parka-clad Charon to ferry you to the After the Final Rose soundstage. Sometimes you just have to …

When a vast, frigid lake looms before you, its icy waters promising to halt the fevered beating of the very heart you’ve pledged to your Bachelor should you linger five seconds too long in its deadly embrace, strip off your clothes, put on an ill-fitting bikini — sure, a one-piece might be warmer, but come on, don’t begrudge the producers their attempts to put a little jiggle into their pool party — and jump the fuck in.

Embrace the moment. (This is your mantra now.) Take the plunge.

It will be the most exhilarating moment of your life, a bone-deep experience of Cold, a teetering on the edge of Oblivion you will never again experience, despite your euphoria-induced promises through chattering teeth to leave behind your old life to chase the polar-bear-headed dragon wherever it leads you.

Abandon those silly thoughts of escape and take the experience for what it was: Your Bachelor’s latest attempt to (1) see you as close to naked as network decency standards will allow, and (2) ascertain just how far you’ll go to please him. If you’re willing to run into a freezing lake, you’ll do pretty much anything he asks.

If you’ve adopted the strategy of being the show’s designated Drama Person, we’re deep enough into the season now that it’s time to kick your game into a higher gear. Where is there to go once you’ve already played the Fake Concussion Card on the mansion’s stairs? Look around you. There’s inevitably another opportunity staring you right in the face. Oh, how about that giant freezing lake? That seems much more conducive to a sympathy-beckoning brush with death than a staircase. Perhaps you’ve picked up a touch of hypothermia during your six-second swim. Eschew the instant gratification of a fleeting congratulatory hug and proceed directly to wherever the emergency medical personnel have congregated, because they will be the first to notice your pantomime symptoms and will quickly alert producers about the easily promotable moment unfolding before them. As your Bachelor looks on in impotent (but paradoxically arousing) worry, you will be wrapped up like a giant frozen burrito and spirited off to a warm place. And soon your Bachelor will once again be at your bedside, and you can say things like, “I’m always getting hurt around you,” to which he can respond, head-light-bulb switch still firmly in the off position, “But you’re always finding ways to get one-on-one time with me,” either because he is an idiot or because the producers have coached him to never act as though he doubts the sincerity of anything you are saying, because you are Good Television.

This will also allow your fellow contestants to cat about thusly in the miraculously brief absence your phantom convalescence affords:

“She cries an awful lot.”
“She’s been dramatic since Day One.”
“She got a concussion from falling UP the stairs.”
“She’s a Tierrorist!” [Note: In similar circumstances, you will get your own clever portmanteau.]
“If this were a class, she should teach it.” [Note: We’ve already sent Tierra a contract for next season.]
“She’s too young to get married and start a family.” [Note: They might have a point there.]

At the end of a successful Escalation, you will receive an early rose, either because your Bachelor is an idiot or because the producers have instructed him to keep you around because he overheard one of the girls promising to murder you, which would be Great Television.

5. Put on a blindfold and let him carry you around like a fireman saving a frightened child from a burning building, because you have really deep trust issues and also refuse to throw away your 2007 ‘Sizzling Hunks of the NYFD’ charity calendar because something about the way Mr. February smoulders at you makes you feel safe, but in a very turned-on way.

This is another one of those lessons that seems obvious, but it bears codifying for later reference.

6. Let him into your Teepee of Trust.

Well, you can’t let him directly enter your Teepee of Trust. First you have to rappel down Tunnel Mountain, eat yet another fucking picnic while pretending to appreciate the now-monotonous majesty of God’s incredible Creation, and then open up about the humility-inculcating benefits of a heartbreakingly itinerant childhood that involved multiple stints in REI-quality temporary housing. And then you can tell him, “I opened up about living some of my life in a tent, and here I am falling in a love in a teepee,” and he will instantly melt, because even though he is an idiot and is mostly doing this show because his penis greedily demanded it, he’s still a human being, as far as we can tell. You’re too good for him, by the way, but you’re not going to realize that until Us Weekly publishes some photos showing him canoodling with Courtney the Model at the Bachelor Pad premiere after-party and he tries to convince you it was just an awkward camera angle.

You know what? Don’t let him in your Teepee of Trust. He doesn’t deserve it.

7. Don’t disgrace your family unless you’re certain you’re getting a rose.

We told you that making him wait was a high-risk strategy. Be prepared that the shame you visit upon your loved ones will be for naught. If you can live with that, go ahead and pull the trigger. But know that there’s a good chance your effort will be discarded as too little, too late. Especially when one of the other girls is asking to be blindfolded and paraded around like a sack of emotionally exposed potatoes.

The Oscars Just Got a Little More Avengers-y