The Bachelor, Episode 3: Lessons From the World’s Longest On-screen Kiss 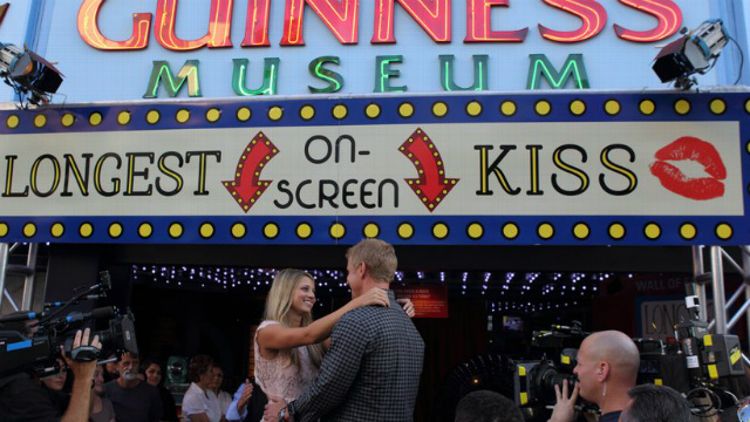 A trip to the Guinness World Records Museum in Hollywood, a fun volleyball game at the beach, some pulse-quickening rides on Magic Mountain’s legendary roller coasters — to the incurious mind, these are nothing but a tourist’s Fodor’s-quality diversions on a jaunt to the great city of Los Angeles. But to one who is seeking out all kinds of horizon-broadening experiences, one who is a sponge ready to greedily absorb all the secret knowledge flowing forth like sweet lifeblood from a chest cavity freshly penetrated by a flutter-by Cupid shooting, one who, above all, desperately wants to figure out how to game the system to win a chance at ForeverLove, these are powerful lessons. Be open to what the universe — and by “universe,” we mean our five-star staff of MacArthur “genius” grant-winning (note: applications still technically pending) instructors who want nothing more than to help you be the best contestant you can be — is trying to teach you. It’s all right there in front of your nose, if you’d just put down the iPad for a second and pay attention to the beautiful gift you’re being given.

School is in session. Follow us if you want to live … with the Bachelor of your dreams, for a period not to exceed six months, four months of which you’re not really together-together, but you don’t want to tell your parents that maybe this whole TV–soul mate situation isn’t going quite as smoothly as you’d hoped, they were such killjoys at the hometown visit. God, SHUT UP, MOM, is it not enough that you were right? You’re gonna wave that Us Weekly cover in our faces now? Because YOUR MARRIAGE is sooooooo great. No offense, Barry.

Your every move will be tracked by cameras, watched by millions of demographically desirable prime-time television receptacles, and scrutinized in real time by cowardly Twitter users who have to triple-hashtag their every thought just to feel anything. This is not the time to retreat within the sun-blistered tortoise shell of self-protection. This is the time to shed the armor and expose your fragile, leathery turtle-body to the elements. Let’s throw a scenario at you: You’re dragged through the most disappointing date possible — remember the helicopters? Yeah, you’re not getting a helicopter this time — at some filthy, tourist-trap “museum” full of poorly rendered plaster avatars of individuals celebrated for various unsettling genetic mutations or meaningless feats of sub-Blaineian endurance. Under normal circumstances, you’d rather be thrown from a helicopter than spend one minute reading a plaque explaining how quickly a man could drive through all 48 contiguous states (97 hours and seven minutes), even if that man happened to be your Bachelor’s father. And then, at the end of this date, you’re taken outside the museum and asked to stand atop a carpeted platform on Hollywood Boulevard, your feet hovering mere inches above piss-sodden monuments to Judy Garland and Arnold Schwarzenegger, while a crowd of dozens of easily distractable Oklahomans wolf-whistle their leering encouragement as you attempt to simultaneously set the world records for Longest On-Screen Kiss and Most Uncomfortable Just-Below-Frame Erection.

This would not be the time to be demure. This would be the time to grab your Bachelor by the base of his skull, mash your faces together in an act of osculatory abandon somewhat approximating a kiss, and go for it. Shine like a diamond. A diamond that is trying not to notice the tumescence being ground into its sparkling facets in an attempt to hide it from the gawking, disappointed mob spilling out of Madame Tussauds.

2. Be comfortable on roofs.

Sean spends more time on rooftops than Batman. No matter the reason for these rendezvous — the view of the stunning nighttime vistas of Los Angeles, the romantic thrill of accessing forbidden places, the patrolling of effective staging areas for vigilante justice — you should always be prepared for the possibility that you could, at a moment’s notice, find yourself looking over the edge of a tall building, pretending that getting some alone time atop the Hollywood Roosevelt Hotel is exactly what you wanted to be doing at that moment. Who wants a helicopter ride? Not you, you’re cool with whatever. You could teeter there forever, as long as it’s with your Bachelor. The other girls are back at the mansion, jealous that you have an unobstructed view of SpongeBob Dirtypants across the street at the Chinese Theater, defecating into Richard Gere’s handprints.

Your time together is short. Let your Bachelor know how handsome he is, and how nervous that handsomeness makes you, ha-ha, normally you’re not like this at all, it’s just that he has an effect on you! Ask him to take off his shirt. Nay, demand that he take off his shirt. He’s not here to not be appreciated, objectified, fawned over. He is here to accept the worship of two dozen potential temporary life partners, but in a totally humble way. He doesn’t even know how that Soloflex got into his bedroom, but now that he sees it there, wouldn’t it be weird to not oil up and work out for the cameras? It would be. But he’s doing it all for you. Tell him you appreciate it and all his other amazing qualities, of which there are an infinite number.

There’s a flip side to gushing, and that’s selling. If he’s so great, don’t you have to be equally great to deserve a rose? So let him know why he should choose you: You’re the best friend he’s always been looking for, the quietly deep — but light and fun! So fun! — companion that will complete him, the person who gives over their entire being when they fall in love, but it’s not like an unhealthy, codependent thing, it’s more of a blissed-out generosity thing. There is no logical choice but you. He sees that, right? He has to see that, you just told him all about it.

You’re not good at beach volleyball? There’s an old saying that applies here: “You don’t have to be faster than the bear, you just have to be faster than the terrible beach volleyball player next to you.” Don’t think about that too hard — feed her to the fucking bear or whatever, just win. And maybe write his initials all over your torso in body paint. He’ll probably be into the marked-territory aspect of it all.

6. Be a little selfish right now. Tell him what you need to tell him. They’re putting you in the middle, and you don’t like it, because now you can’t be yourself while you’re in the middle. Do you see? The other one is not who she says she is. No, you don’t know why you’re in the middle, you just are. It’s nice to just sit and talk like this, like we used to, two days ago. You’re not a drama person. You’re just yourself, not this crazy person he’s seeing. Why are you involving yourself? You’re not, they are. You’re trying to be you, your best you. But how can you be you when you’re in the middle? Maybe you’re better as friends. Why does this always happen to you on this show?

Go lie down. Your limo will be pulling up shortly.

There is no more powerful tool in the savvy, strategy-minded contestant’s arsenal than the Alone-Time Interruption. The show’s bylaws — which no one ever bothers to read, it’s always a beeline from the limo to the Merlot fountain — explicitly state that the Bachelor can’t refuse an Alone-Time Interruption; he must take the hand offered him and passively follow an Interrupter to wherever she leads, no matter how little private conversation the Interruptee has received. While there had previously been an informal gentlewoman’s agreement governing the use of this powerful filibustering technique, the current dating-show climate does not allow for such procedural niceties. What are you going to do, let him talk to that trampy man-monopolizer twice in a single night? She JUST TALKED TO HIM. Interrupt or be interrupted, kill or die.

You are standing at the top of some stairs. For a precious moment, the cameras are not watching. You know what to do. (Quietly and gently lay yourself at the bottom of those stairs, scream for help, then make a miraculous near-recovery when people start throwing around words like “hospital” and “faker.”)

Sympathy is a weapon. Use it to stab him in the heart.

Remember what we said about sympathy? Of course you do, it was the previous lesson. If you’ve got a painful story from your past to share, possibly involving abuse at the hands of a foster family, there is never a better time to bring it up than when you’re sitting three feet away from the Eli Young Band, who will pick the perfect soundtrack for your emotional revelations. Eli also promises not to eavesdrop too much, he just needs to get a sense of the trauma for musical reasons. You can trust him with your deepest secrets. He’s a professional. And, to be honest, Sean is a little too busy trying to suppress his tears to truly listen to what you’re saying.

So as it turns out, the Ford model strategy needs some tweaking. (Sorry, Kristy. You seemed like you had things under control last week.) Let’s try “fit model” this time. No, no one knows what a “fit model” is, but that’s unimportant. It’s enough that “model” is in there somewhere. Bachelors love models.

Filed Under: Bachelor School, The Bachelor