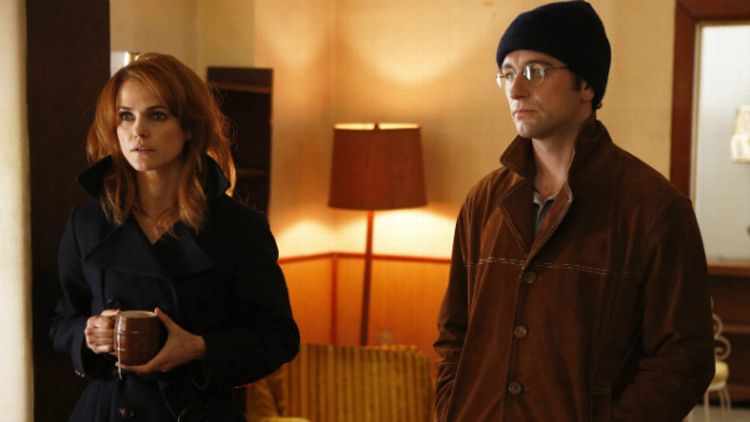 In his best-selling book Outliers, author — and noted Grantland opinion-haver! — Malcolm Gladwell makes the case that it takes at least 10,000 hours to master any endeavor. It’s encouraging, this idea that dedication and repetition are the primary barriers separating the good from the great. And there’s really no question that doing something over and over can boost confidence and make even the most challenging task seem simpler. But in my experience, repetition can also cause you to lose focus. As the actual work becomes reduced to a series of movements and patterns, the mind is suddenly free to wander. Mastery allows you to let the world back in.

There are some challenging, recurring tasks where this could be a good thing. Whittling wooden ducks, perhaps, or recapping zombie television shows. But I don’t think spying is among them. I thought of this during last night’s excellent episode of The Americans, when over-familiarity and intimacy bled into the Jenningses’ already dicey shenanigans. It’s not just that, as everyone from Elizabeth to General “Subtitles” Zhukov likes to remind us, the Cold War is suddenly warming considerably. Much of what made “Gregory” great were the subtle reminders that Philip and Elizabeth have been doing this sort of stuff — decoding messages, interrogating associates, overdoing it with the witch hazel — for over 15 years. Philip’s rangy physicality is never overtly on display; he carries himself like the travel agent the world expects him to be. But as the goons in his blind side discovered, he’s only ever one tantrum away from snapping bones. Ditto Elizabeth, who can rev up or cool down her emotions with the precision of a Ducati. Their confidence in their abilities is earned. Which is why it’s so fascinating now to see them get sloppy.

OK, sloppy is harsh. But it’s emotion, not the FBI, that’s suddenly making everything more complicated. Consider the very nature of this week’s situation: Robert, the stab victim from the pilot, had a secret wife and baby stashed away in the wrong historically important East Coast city. (Look, I’m no Commie sympathizer, but anybody who chooses Philly over Boston is doing something right in my book.) Philip’s loyalties are immediately tossed in the salad spinner: He wants to do right by his friend, who died under his watch. But, in a larger sense, doing right by Joyce and Baby Oscar would also represent a victory for the idea that Directorate S agents are more than mere automatons of empire, that love and privacy have a place in their artificial lives, too. Philip, the man, would like nothing more than to help Joyce. But Philip, the man, doesn’t really exist. Everything he does is for a higher power; not God, but country.

Elizabeth is similarly compromised. In order to pull off an impossible extraction under the suddenly watchful eyes of the Feds, she turns to Gregory, a former Black Panther in love with both the cause and her. This was a wonderful new wrinkle in a show full of them: We knew both Elizabeth and Philip had sex with people for work; they knew it, too. But here we go again with messy emotions, as this was a love affair, not overtime. The often-underutilized Derek Luke is fantastic as Gregory, easily able to showcase the broken heart lurking beneath the layers of effortless cool. Here’s hoping he sticks around for a while. And it was remarkable to observe how his presence allowed Keri Russell to modulate Elizabeth yet again, suggesting different levels of steel. She’s softer around Gregory than we’ve ever seen her, relaxed, almost sensual. But due to necessity and circumstance, she’s always Checkpoint Charlie, with walls all around. (Have you noticed that every man on this show approaches Elizabeth from behind? Timochev raped her, and Philip almost got a knife in the gut for kissing her neck; we know she really likes Gregory because all she did to him was extinguish his joint.) Still, their interaction gave us some actionable intel: Philip’s personal perestroika campaign is working. “Things are changing, at home,” she tells Gregory. “He’s your cover,” he replies. “No. He’s my husband.”

But lock three deep-cover lovers in a Philly row-house with a hysterical woman and a crying baby and things tend to get smeary. I loved how the brinksmanship over what Joyce actually knows — nothing, it turns out, until it’s too late — mirrored the brinksmanship over Philip and Gregory’s relationship with Elizabeth. With the steady hand only possible after 10,000 hours, Philip is able to mix the chemicals and decode Robert’s final message, but Gregory’s cruel monologue cuts him worse than the goon’s knife will later in the hour. “Let her have a piece of something real,” Gregory tells Philip, as if the reefer and reel-to-reel player aren’t as much of an affectation as the Jenningses’ formica kitchen. But even if he’s not real, it’s still Gregory who has the firmest grip on the realpolitik of the mess they’re in: He suggests killing Joyce and getting the hell out of Dodge. But Philip can’t keep his families straight: “If you touch his wife, I’ll kill you,” he says, although everyone knows which wife he’s really talking about.

When, at episode’s end, Philip and Elizabeth deliver Joyce and Oscar to their new handler (Granny, thrillingly played by FX MVP Margo Martindale) it doesn’t take a spy to realize what’s actually going on; that black van looked more funereal than a hearse. Does this make Philip and Elizabeth hard, for going by the book? Or does it make them soft, since the comforts of procedure allowed them to imagine a better life for Oscar in Cuba, not Siberia, and anything but a tawdry, fake OD for Joyce? More and more it appears that it’s Stan Beeman, the actual American, who welcomes the darkest parts of the job; like he’s one escaping perp away from doing something a hell of a lot worse than what Philip did last week with a pillow.

And so it’s fascinating to observe the moral calculus behind every decision our two leads make in order to stay alive and maintain their cover, and all the new boundaries being built to support this questionable math. We’re learning there are good killings and bad killings, acceptable affairs and secret ones. Everything about Philip and Elizabeth Jennings is a lie, but suddenly that word has teeth. (Him: “You lied to me for 15 years.” Her: “Lied? What does that even mean to us?”) Even harder to handle is honesty: that they are now very much compromised by their children and their slow-dawning affection for each other. The sad rush of intimacy at episode’s end, with the sun rising and the kids still sleeping, was devastating. “It never really happened that way for us, did it?” Elizabeth asks, crying for what feels like the first time. “I wish that it had. But I feel like it’s happening now.” Marriage, then career, followed by self-identity, and, eventually, love. The two are living the American dream! Only in reverse.

What I said at the top, about mastery letting the mind wander, applies to writers as well as anyone else. There are two kinds of novelists and it’s particularly true with those who write thrillers: There are some who plot everything immaculately beforehand and those who ease up on the throttle and let the story tell itself by feel. (In the latter camp, I’d put wonderful writers like James Crumley and James Lee Burke, master stylists whose work I devour even though I rarely have any clue what’s actually going on.) I’m excited to note that Joe Weisberg, the creator and showrunner of The Americans, seems very much to be in the former camp. We’re only three episodes in and already there are no loose threads: Robert’s wife appears to complicate things, Stan’s quid pro quo relationship with the surprisingly feisty Nina is headed in surprising directions. Even the semi-friendly racquetball game between neighbors — just blowing off steam! And weighted metaphors! (“Where I come from you leave, you lose.”) — delivers. The scene work throughout is lean and tough: no wasted movements, no fat. And the dialogue (credited last night to Joel Fields) is crisp but never showy. Elizabeth and Gregory’s opening banter (“Look what the cat dragged in.” “Look at the cat.”) is clever but also serves a purpose, hinting at the topsy-turvy nature of their relationship: Elizabeth was meant to be the predator, but her unexpected feelings turned her into prey. (Ditto the killer lines given to Richard Thomas — John Boy Walton himself! — as the FBI supervisor: “You caught the fish, Beeman. You get to gut it and cook it.”)

To Weisberg’s great credit, The Americans manages the rare balance of having fun with its material but never laughing at it; this is an easily lovable but fiercely unsentimental show. There’s a consequence to every action, one that’s often as sharp as Keri Russell’s cheekbones. “I’ll win any way I can,” Philip said to the departing Beeman at the gym. But the brilliance of “Gregory” lay in all the subtle ways it suggested that the cold-blooded spy is discovering limits in himself that the hot-blooded g-man abandoned years ago. Game on.

Pretty Little Liars, Season 3, Episode 19: 'What Becomes of the Broken-Hearted'

From Star Wars to Today, Inside ILM Headquarters